Think You Know How Slanted the Media Is? Read This

Bruce Bialosky
|
Posted: Oct 15, 2017 12:01 AM
Share   Tweet
The opinions expressed by columnists are their own and do not necessarily represent the views of Townhall.com. 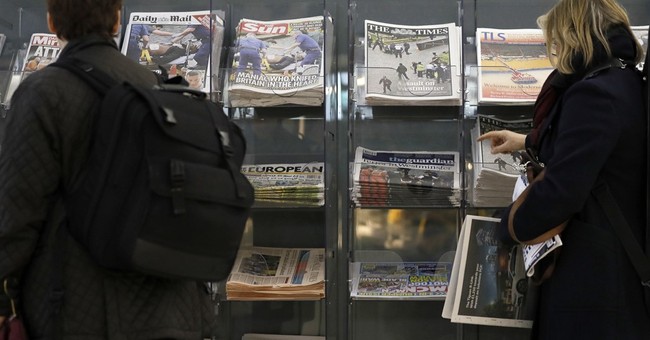 Every Republican and/or Conservative can spend hours pontificating about how the Mainstream Media (MSM) does not come close to presenting the facts fairly; it is grossly biased.  That has grown exponentially since Donald Trump became president.  Read this and you will not doubt the veracity of this scenario.

This tale started when Jane Eisner, editor-in-chief of the Forward (“News that matters to American Jews”), sent out an email asking for help.  The Forward was founded in 1897 (formerly known as The Jewish Daily Forward).  She expressed her concern as to what her publication “had done to contribute to the coarsening of our public discourse and the fracturing of civic comity.”  She asked for help by “sending your thoughts.”

As a leader in the Jewish Community who has spent more than 25 years trying to enlighten what I believe are misguided Jews, I saw this as an opportunity.  I wrote her to comply with her request.  I started by saying “Relentlessly and viciously attacking Republicans and a sitting president, your publication has added to the coarseness of the public discourse.  As a fellow journalist, I can tell you among the center/right of center, your relentless attacks on Republicans and the President makes you irrelevant.  Not creditable.  Dismissed out of hand.”  I added some other comments, then ended with “You said you wanted feedback, well there you have it.  Maybe if you had more voices like mine or Dennis Prager's you would seem a little more balanced.”

A couple of days later Ms. Eisner responded “Thank you for writing. I am interested in publishing more voices like yours. Would you like to pitch some ideas to [our opinion editor]?” I thanked her and obliged.

I thought this was a great opportunity.  Certainly, I would be lambasted or ridiculed by most of the readers, but I can handle that.That comes with the territory of being a Jewish Republican.  That is old hat to me.  The thought is if we don’t express differing views in their venues, they will never experience anything other than the echo chamber of thoughts they read every day. I was truly excited.  This is a well-read publication by the active Jewish community.

I corresponded with the opinion editor and we agreed I would write a column on DACA (Deferred Action for Childhood Arrivals).  The Forward had published typically pro-DACA columns highlighted by a Columbia University professor viciously attacking President Trump for everything except beating babies.  It was a perfect issue to start with defining a difference.

I went to work.  This column had to be above reproach.  I knew I would be attacked. Even though I was well versed on the subject, I read everything I could, particularly the statements by the Jewish leaders.  I also knew I had to kill them with kindness; no sarcastic comments (I do that sometimes) and virtually no negative terminology. There was no endorsement of President Trump nor a statement against DACA – just a rationale for taking a legal path if you want DACA to exist and supporting immigration reform.

Most of the people who read my weekly column are familiar with my style and thankfully many of you have grown to appreciate what I write each week.  The idea was to make the Forward readers like what I am communicating even if they do not agree with everything I write.

I submitted the column and then waited for the editor’s response.  She initially said she liked it and would get back to me. When she responded it was nothing short of stunning.  A Jew had not seen this much red since Moses parted the Red Sea. She had rewritten my entire column.  It did not resemble my column in fact or tone. For example, she had completely cut a brilliant quote from Andrew McCarthy about how inappropriate and wrong Obama’s comment on Trump’s action had been. Gone.

I let her know what she had done to my column was wrong and unacceptable.  Her response was if I did not like it we could kill the column. She stated that the changes were for language flow and fact-checking.  When I asked what facts were in question because I had everything sourced, her response was: “Ok, so just kill it?”

Not to leave something like this alone, I called her and as you can guess that went well. She made some comment that led me to remind her I have been writing columns longer than she has been alive and had never had a column completely altered like this.  After some more back and forth in which she made clear she was pro-DACA (I couldn’t tell from her butchering of my column), I told her that she was not abiding by Ms. Eisner’s desire to have different voices in the Forward.

That is when she objected and told me “I have run three right-wing columnists recently.  I ran Ben Shapiro; you agree he is right-wing.”  When Ben ran the column on the Daily Wire it was titled Everybody’s Lying About Charlottesville.  The title of the column she ran of Ben’s was Trump Isn't the Only One Lying About What Happened in Charlottesville. No wonder they ran the column.  They will always run a column by the other side when they can use it to advance their own arguments.  Then they will brand the writer a “high-minded” individual until they go back to deriding him.

I had high hopes for writing for the Forward.  I would get their readers out of their echo chamber.  Maybe even some would like what I was writing and read my columns in Townhall.com or elsewhere.  The liberal press doesn’t really want its readers to consume divergent opinions because they might wise up to how they have been misled. But we must try because otherwise those poor people will live with their misguided thoughts for the rest of their lives.  That is a fate worse than death.

Next week read the column that the Forward would not run.