A Christmas and Hanukkah Miracle

Bruce Bialosky
|
Posted: Dec 25, 2016 12:01 AM
Share   Tweet
The opinions expressed by columnists are their own and do not necessarily represent the views of Townhall.com. 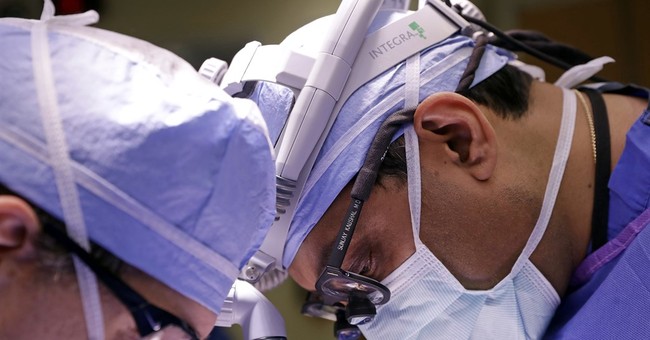 With Hanukkah and Christmas converging this year due to the magic of the Jewish calendar, it is a wonderful time to tell you of a miracle of modern times that certainly brought joy to my life.

My family and I have been traveling for Thanksgiving since our two children went to college. Instead of bringing them home, we would rendezvous somewhere and spend four days together experiencing one of America’s great cities. After their college graduation, we continued the tradition. This year we went back to New Orleans -- truly a special place.

When we returned home I continued my exercise, with a similar experience. Again, I did not really feel any pressure in my chest during my daily activities or when I was walking somewhere.

My big test was on the following Saturday morning. Saturday is doggie walking day. We have three and though the heaviest might be 25 pounds (Rocky, our Jack Russell Terrier), “walking” three dogs is a misnomer. They mostly walk you. But we live in the Santa Monica Mountains that divide Los Angeles from the San Fernando Valley. So the walk for an hour up and down inclines is a good workout. I felt no discomfort.

Monday morning brought another treadmill effort and this one lasted about ten minutes before I said “something is wrong here.” I called my doctor, Reed Wilson, who is not only an internist, but a cardiologist. When I saw him on Tuesday he immediately stated he thought I had some blockage in my arteries. He gave me an EKG, but it was normal. He then hemmed and hawed a little because he wanted me to take a treadmill (exercise stress) test. I took one earlier in the year and he was afraid the insurance would not pay. I said let’s go. He again found nothing even though they now had some pictures of my heart.

He sent me the next morning to Cedars-Sinai hospital in Los Angeles (a premier medical facility) to have another treadmill test. In this they inject Thallium into you during the treadmill test. If you have not taken one of these tests, every three minutes the treadmill speeds up and the elevation increases. It’s not the speed that might kill you as you get to three minutes or six minutes; it is the rising elevation. I was at over nine minutes when they injected the Thallium. The nurse practitioner looked at my EKG and the pictures and the fact I had gone as long as I did on the treadmill and said “I think you have acid reflux.” They then moved me into a room to take pictures of my heart that the Thallium allows them to see with greater definition.

Sure enough, I had significant blockage in my Left Anterior Descending (LAD) artery. Reed stated I needed to have a stent put in to clear things up. He did confirm there was no damage to the heart itself, just the blockage in the LAD. He wanted it done by Rajendra Makkar who he knew was Cedars' top guy, but he was out of town. Since I was otherwise fine if I did not over exert myself, we waited a week.

I spent the week speaking to a lot of the important people in my life. My wife, my kids, my brother, my uncle, my friends starting in descending order of length of friendship (40+ years, 30+ years), my rabbi and a mentor type who had gone through the procedure himself. I assured everyone I would be fine and that it really is a very short procedure. Only the ones who had the procedure or knew someone personally who did felt reassured. The others I knew were a little worried. After all, they would be messing with my heart. And it involved a procedure in a hospital and that kind of scares everyone because there is always risk.

We arrived for check-in at 4:30 PM and ran into another of my rabbis. I told him what I was there for and he could not believe how calm I was. I told him, don’t worry I will be fine.

When I entered the prep area, I looked at the team working and the first thing I blurted out was “Well, look at this motley crew.” They knew they were in for the Bialosky treatment. They had me for about an hour and a half and boy did we have a good time. Great people with the joy of helping others every day.

Then nurse Terry came to wheel me into the operating room and she was more like Nurse Ratchet. I could have used my best lines on this lady, but they would have fallen on sour ears. Fortunately, my two techs were like Bert and Ernie with brains and we had a good time getting me set-up. And this room is out of the future. What a surreal experience with all the equipment and the 60-inch screen they swing in next to you so the doctor can look at the inner workings of your heart.

Finally, Doctor Raj comes in from a room where he was working on another poor soul. I am not out because they do this procedure under a twilight anesthesia. I was getting to experience this live and awake. Raj comes over to introduce himself. I say “Rajjie, just remember this is the most important one of these you have ever done.” He was a little taken aback, (you think he would be used to Jewish humor by now working in a Jewish hospital) and turned to his colleagues and said “No one calls me Rajjie other than my close friends.” I said “Welcome to my operating room.”

For the next 50 minutes or so they did their work, snaking their device through my right wrist (preferred way these days to the groin) and I was just lying there watching the pictures on the giant TV and yammering when they did things that were a little too painful. They wrapped things up and Rajjie came over to tell me what he had done. He said he had put a stent in my LAD and two more in what he said are tributaries. He said he was not sure those were necessary, but as long as he had his device in the area why not do a little extra protection.

He then said to me I want you to go to work tomorrow and I said “Wow, OK.” I asked him when I could start exercising and he said in a week. I told him I wanted to go home and he said I could in three hours and that brought a big smile to my face. And Rajjie disappeared. My techs started dismantling all the apparatus and I realized I just had this procedure and I was feeling a little discomfort in my chest and nothing else. It was as if nothing had happened.

Once they wheeled me into the recovery room, they notified my wife and she came to join me. I started calling my list (in descending order from the longest of 40+ years). They answered delighted to hear from me and asked how am I doing. “I said great and I am going home in a couple hours.” I could not speak to everyone because I had my procedure in the evening. It got too late to speak to some, but still it was smart I brought my phone plug. The biggest impediment to me leaving was I had a cuff on my wrist where they had entered to get to my artery. They had to gradually let the pressure out of that so I would not start gushing blood.

At 11:30 PM I stood up and got dressed. I could have just walked out, but the hospital has its rules and the wheelchair was my exit vehicle. No. 1 Son was there to take me home as my wife was a bit wiped and Darling Daughter had doggie duty while her mother was with me at the hospital. I could not have felt much better. The discomfort in my chest was gone and the only sign anything had happened to me was a little bandage on my wrist.

Our modern medicine is a miracle. Those who believe only in science will attribute this situation to only that, but those who believe there is a God know that what happened to me was something more. I just had a major procedure clearing the most important artery to my heart and I have zero residual effects. It is just amazing. Some people tried to call me the next day and were stunned I was at my office. As I said, yes, it is amazing.

The other wonderful part of this was all the people I spoke to checking on me. I have the most wonderful wife of 30 years and two children in their 20s who I love dearly and they love me. But it was all the rest of the people. Every time I spoke to another relative or friend the call always ended with them telling me “I love you.” Maybe the thought, even for an instance, that I might not be there brought their emotions out. Maybe they were stunned I was doing so well and had such a positive attitude. But the best part I kept telling them is I am good for another 30 or 40 years now.

I am writing this less than 24 hours from the time I had the stents put in while listening to Christmas music in my family room. The only way you could tell I had anything done is if you had a magnifying glass to see the mark on my right wrist. Truly a miracle.

When you are reading this we Jews have lit our first candle for Hanukkah commemorating our famous miracle. And you Christians are now celebrating your miracle of Christmas.

May you have many miracles of your own in the coming year. God Bless. There is much love to be shared.