What if Obama Is Wrong About Islam

Bruce Bialosky
|
Posted: Jul 17, 2016 12:01 AM
Share   Tweet
The opinions expressed by columnists are their own and do not necessarily represent the views of Townhall.com. 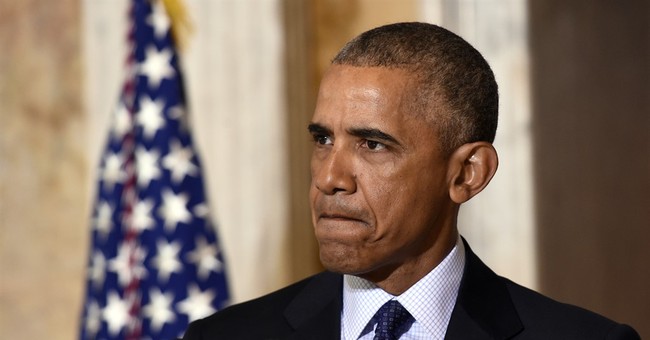 A central tenet of President Obama’s argument regarding our national security is that we should not chastise all Muslims. He repeats often that Islam is a religion of peace. What we need to examine is whether that is just something he states over and over again -- hoping Americans will accept it as fact -- or whether that is actually true.

First, before anyone jumps off the high board let’s determine the parameters. Almost everyone reading this column and/or across the world wants to believe that Islam is a religion of peace. Except, of course, for some wing-nuts: some people who you can never convince of a thing or maybe some Muslims who believe they are directed to violence by their religion or their religious leader.

Next, President Obama has compared Christianity to Islam and gone back to the Crusades or other historical actions for the purpose of drawing comparisons. Others have criticized Islam for the militant actions going back to the 8th century. This is not about that. Likewise, we will not discuss any parts of the Koran to establish a position.

We will only examine the period after World War II. History will tell you that there was some coordination of the Islamic leaders in the Middle East with Hitler and Germany, but the world was at war and most everyone except for the Swiss chose sides.

1. The Islamic Republic of Pakistan (did not take that full name until 1956) was formed by British partition on August 14, 1947. Since that time, Pakistan has had four conventional wars with India. It is constantly on alert with minor skirmishes with India. It has been a questionable friend of the U.S., and its Western provinces are worldwide hot beds of terrorism.

2. In 1948, Ben–Gurion declared the existence of the State of Israel in an area Jews had been living for over 3,000 years. Since that time there have been four major wars, multiple Intifadas, constant military excursions and thousands of terrorist attacks against Israeli citizens by Islamic countries and Muslims. Only two Muslim countries have a peace treaty with Israel. The leader of one of those countries, after that peace treaty was agreed to, was assassinated.

And then there is the following:

3. Afghanistan has been in turmoil for over 40 years. Officially the Islamic Republic of Afghanistan was plunged into war after a Communist takeover in 1978. The U.S. backed the anti-Communists to no avail. That led to the Taliban beginning their control of the country in 1994. Other than their totalitarian actions toward the people of Afghanistan, particularly the women, they became a center and training base for worldwide terrorist organizations when the terrorists were not crossing over into neighboring Pakistan. Fifteen years after the U.S. took over the country post 9/11, it remains in turmoil and the murderous Islamic Taliban still roams the countryside.

4. Iran and Iraq are a special case. When they are not wreaking havoc across the globe, they stopped to have a war where they killed an estimated 1.5 million people. One cannot say they were killing Jews or Christians this time because they were killing each other as one side was Sunni and the other Shia Muslims. Someday the rest of us will understand why the difference is worth mass murder. When they were not fighting each other, they were killing or torturing their citizens and restricting their rights.

5. After finishing the murderous Iran-Iraq war, Iraq invaded its neighbor Kuwait where an estimated 4,200 Kuwaitis were killed and their oil fields seriously damaged. The U.S. led a force to take back the country in which there were over 20,000 Iraqi deaths and casualties on the side of the allies.

6. Islamic Syria is a special place where they have a dynasty of butchers, but butchers who use poisonous gas. The anointed son of a mass murderer, in an attempt to hold on to power, has murdered an estimated 250,000 of his own countrymen and ran another few million out of the country. The entire country is a disaster zone.

7. Egypt has a more limited violent history. Nasser led his country in three losing wars against Israel. His successor Sadat led one war before making a peace deal for which he was murdered. His successor, Mubarak, murdered thousands to stay in power. But he was a prince compared to the Muslim Brotherhood who succeeded him and installed a totalitarian government. Sisi then overthrew this group in a coup d’état. Finally, an Egyptian leader acknowledges there is a problem in Islam and calls for a reformation. The call for reformation would cause him to be called a moderate by most, but Obama has dissed him at every turn.

8. Libya features the history of Muammar Gaddafi who took over in a military coup d’état. Murder, recriminations, weapons of mass destruction, the death of Gaddafi and then a failed state where Americans were murdered. The country is currently a mess with ISIS terrorists roaming freely.

9. Of the estimated 60 terrorist groups on the U.S. State Department watch list, about five are not Islamic. A couple notable exceptions are the FARC in Colombia and the IRA in Ireland. The terrorists murdering people all over the world are led by those groups in the Terrorist Hall of Fame like Boko Haram, Al Qaeda, Hamas, Hezbollah, the Taliban and now the hot new murderers, ISIS. There are so many that splinter groups have splinter groups. Boko Haram has murdered more than 20,000.

11. If Islam is truly a religion of peace why are there so many violent attacks in the name of Islam during the holiday of Ramadan, which is one of the five pillars of Islam?

I could go on, but let’s focus for a moment on what is good in the Muslim world. There is Sisi in Egypt. There is the ever-wonderful King Abdullah II of Jordan. When you visit the U.A.E. you leave thinking if the Arab world were all like this, the world would be a vastly-nicer place to live. There appears to be a sign of moderation and actual democracy breaking out in Tunisia -- none of which was effected by the policies of the U.S. or Obama administration.

No one would make the case that all Muslims in the world are evil or murderers. That is another straw man that Obama creates to make his argument. What we would like to see is Obama actually make the case with bullet point examples supporting his assertion that Islam is a religion of peace.