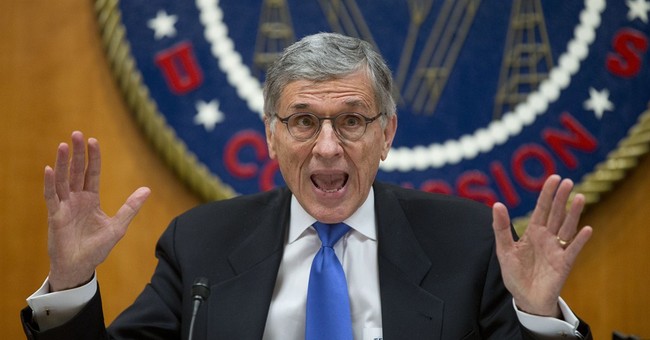 There are not many things mainstream Republicans have in common with Elizabeth Warren leftists other than their mutual disdain for crony capitalism. The main difference here is that the Left mistakenly believes that these people who feed at the trough of government are actually Republicans. The Left beds down politically with these affluent bloodsuckers while they live in disdain of the Koch Brothers who take no government support. These crony capitalists have struck again and this time they will live to regret it.

The issue that duped these supposed capitalists was what has been branded as “net neutrality.” This is another term of the left where they have cast the matter in bucolic terms. After all, they call themselves “progressives.” I have said repeatedly that the only thing they are progressive about is progressively restricting your rights and progressively taking more of your hard-earned money for the government.

We all know the internet has worked fairly well unimpeded by government corruption. Anything that allows people vast amounts of freedom eventually is characterized as needing “supervision.” The control freaks have made many advances at limiting the freedom of the internet through either taxing activities or contrived control of the flow of information. The biggest effort came from the naïve supporters of “net neutrality.”

One of the biggest cheerleaders has been Reed Hastings, founder and CEO of Netflix. I was one of the earliest subscribers to Netflix and have written passionately and positively about the service. But the service has changed in the last few years as they have pushed more of the product through streaming which goes through the systems of other companies that Hastings does not pay for nor does he wish to do so. It has been estimated that a third of the cable companies’ capacity is being consumed by Netflix streaming. Hastings may be a smart businessman, but, as is often the case, he and some of his follow supporters of “net neutrality” are just stupid about how government works especially once it gets its hands on a new revenue source which can be controlled by them and litigated by their attorney glad-handers.

Hastings was not the only shill for the control freaks who wanted to get their paws on the internet. Eric Schmidt, CEO of Google, and David Karp, CEO of Tumblr, fell into the trap. Apparently, Karp in a meeting at the White House demanded of President Obama that he apply rules to the internet that were set up for telephone companies a century ago. Karp, an insipid 28 year old, was either not around or in diapers when Ma Bell ruled the country and innovation was stifled by the Federal Communications Commission (FCC). If those rules were still in place, Karp would be driving a pick-up truck instead of being worth over $200 million. Obama and his statist friends love leading sheep like Karp to slaughter.

Obama could not get Congress to change any rules regarding the internet because, despite Republicans being pro-business, most of the current crop has a huge dislike for crony capitalism and they believe the internet is working quite well without federal intervention. Some Republican governors have favored being able to collect sales taxes on internet sales, but Republicans know what happens when the Left gets its hands on an industry. Look what they are doing to the banking industry and medical device companies. Republicans also know what communications were like before when the FCC controlled the phone companies. Obama found his likely path by going back to the FCC to please these capitalist foils.

The FCC, with new chair Tom Wheeler fully in charge, saw an opening to propel the urgings of these supposed capitalists into a takeover of the internet. Their 332-page document was never shown to the public or the press before it was voted in force by a 3-2 partisan margin. Despite the requirement of public disclosure, they hid the contents until two weeks after passing the bill. God knows if the final document was even what was voted into law. The best (or worst) part was the adoring crowd in the room when the announcement was made cheering the vote. The fools were cheering on something they had no idea what they were supporting. That is the power of naming something in an Orwellian manner like “net neutrality.” They will always find saps that will support them. It is akin to the boobs on Jay Leno’s Jaywalking or Jimmy Kimmel’s Lie Witness News. You can always find useful fools to support your cause.

After the vote the crony capitalist useful fools began a retreat. First, it was Schmidt who begged off support. A week after the passing (and still prior to its formal release) Hastings sent out his Chief Financial Officer, David Wells, to recant their position. Wells stated “Were we pleased it pushed to Title II? Probably not. We were hoping there might be a nonregulated solution.” Karp went on CNBC and stated he did not “entirely understand” the internet-service market. Too late, you dolt. The rest of us have to suffer for your callowness and can only pray a Republican is elected President in two years to turn this around or a court rules the FCC overstepped its authority.

When will capitalists stop trying to line their pockets through the largesse of the government? Certainly some government/business cooperation is needed, but it stops there. Obama has been a master of playing off these greedy capitalists who think they can control factors if they are at the table as opposed to fighting the expansion of government control. Playing footsie with the Left never works over time. Hastings, Schmidt, and Karp are already regretting their foolhardiness. The rest of us will end up suffering.