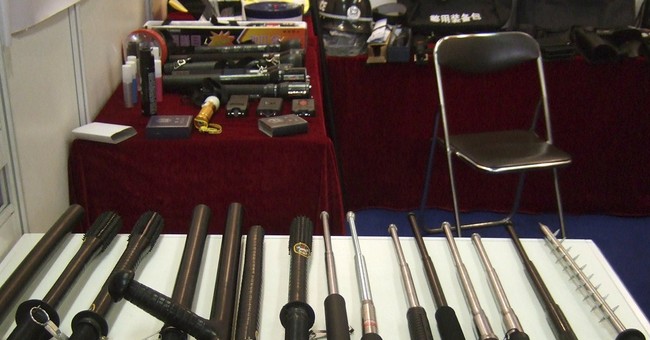 There is an argument put forth among some in Los Angeles whenever there is an eruption coming from Gaza of rockets fired into Israel. We love to hear the restraint that certain people suggest to the Israelis about the level of their military reaction to the terror raining down on their civilian population. We ask these people what would happen if there were random killer rockets landing in Brentwood or Westwood or Malibu. We are certain that limousine liberals would be demanding annihilation of the perpetrators.

In the same manner it is easy for those who never have to confront evil to demand that we here in the United States should play by a different rulebook than the murderous enemies that challenge civilization.

First of all, all Americans who are in favor of torture raise your hands. That is a small number, if any. Our culture has risen above that and justifiably that should be our policy and our goal.

There are certainly individuals who honestly and courageously are against the use of torture. Senator John McCain is a perfect example. People across the political spectrum have expressed that torture should not be part of our lexicon and I have read their thoughts on this subject.

But for us to completely abandon techniques to extract essential information from combatants would be unilaterally disarming.

What seems to be forgotten is that we are at war. We have been at war with Islamic terrorists for at least two decades if not longer. The way things are going, we will be at war with these malcontents for a long time. Until they are wiped out, this conflict will continue because groups like the Taliban, ISIS, Boko Haram and Hamas will not relent until totally defeated. We are reminded of that whenever they show us another beheaded American, but we seem to forget about it when it is over “there,” in Afghanistan or Israel.

The recent report released by Senator Dianne Feinstein is a very sad event in our history. Feinstein has been a stellar grown-up amongst a group of misguided Democratic Senators, with only a few exceptions such as Senator Robert Menendez. Some consider this report a badge of honor for her; while others like me consider this a black mark on an otherwise fine career.

There has been a lot thrown around about this matter and there are glaring assertions in the Feinstein report. There are two points on which to focus. The first is I am almost absolutely sure that there were some excesses in the interrogation even if our people followed the rules that they were told were in place. This was in the middle of a war, and, as much as we attempt to meter the behavior of our personnel, there will be things done that should not have been done. I would not want to be the person judging that behavior ten years after the fact. The question becomes: was clear malicious intent applied as opposed to an attempt to garner information to protect our country? That is what the bosses were there for at the time – to protect against the excesses.

The second point is you will never convince me that solely using conversation and positive encouragement will elicit information from our enemies. I agree that sometimes the techniques used will gain us false information, but that would happen in either case. There will be situations where prisoners will break and provide us with valuable information through the coercion -- whatever the methods used. There will always be times where we need to do what we need to do to win a war.

The sanctimonious attitudes toward what was done by the CIA over ten years ago (yes, waterboarding stopped in 2004) flummoxed many people. The same people decrying the actions of the CIA are not marching in the streets demanding President Obama stop using unmanned drones from annihilating terrorists and anyone hanging with them. Personally I think that anyone hanging out with well-established terrorists get what they deserve and are not actually collateral damage or innocent. If you don’t believe we should be using torture or drones then you ignore the dangers in this worldthat have existed for millenniums and I would not want you in a position of power.

I am against torture. I also would love to not have a military. I am also a realist. It can be an ugly world beyond our borders. The current danger principally comes from maniacal Islamic terrorists. There will be another danger after that challenging our country and our allies. They hate us not because of what we do, but because of who we are and what we stand for as they attempt to impose their will on us. We need brave souls willing to protect us and I am glad we have them.