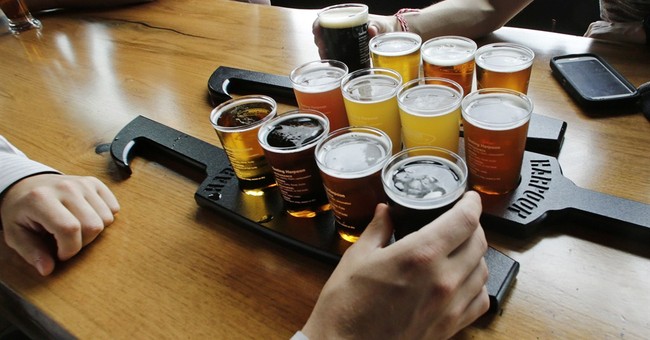 People don’t usually think of Beer and Banks together. Most people like their bartender more than their banker, even if those bankers at times get pretty wild. Certainly bankers have gotten pretty friendly with bartenders since Dodd-Frank was passed, now that they have federal regulators hovering over them on a daily basis. That would drive anyone to drink. But the comparison of what is happening with beer and what is happening with banks is an excellent study in free enterprise in America today.

It used to be that there were a few breweries that controlled the beer market. But it was not always that way. Back in the 1890’s there were over 2,000 breweries in America. By the 1950’s that had slipped to 89. By the 21st century, the government was protecting us from mega-mergers of breweries. In 2002, SAB acquired Miller. That was followed by Coors merging with Molson. If that was not bad enough, in 2008 SABMiller merged with Molson Coors to become MillerCoors. That was quickly followed the same year by InBev acquiring Anheuser-Busch. Common wisdom was that all these super mergers were going to cause consumers harm. But it did not quite turn out that way.

There are now more breweries in America than ever before. There are about 2,475 and rising. Those of you who go to a local pub today could see 30 beers on tap, and none of those are the big boys. Those beers change weekly. It used to be if you want to be a sophisticate you would drink a foreign brew like Heineken or Peroni. That is so passé. If you are drinking what is on TV you are behind the time. Gastro-pubs are popping up all over. With microbreweries opening up regularly (221 new ones just in the second half of 2012), those that drink beer are truly in the golden age of brews in America.

Despite the fear that was being spread by government officials with the mega-mergers, the free market cured that problem. The microbreweries are growing at a huge rate and eating the lunch of the big boys. The only thing that stands in the way of these entrepreneurs is normal health laws, zoning laws and building permits. That is what makes this country the miracle it has always been.

On the other hand there is the banking business. There have been mergers before and during the last 50 years there have been a slew of mergers. When that happened, entrepreneurs saw the opportunity and started new banks. That is what we expected to see happen after the banking crisis of 2008. After all, we had sung this song before.

Unfortunately, our governmental leaders thought they had to create a new set of rules for the banking industry. They saw that there was a problem with banks that were too big to fail. They wanted to create a system that would cut off the possibility of a 2008 replay when the federal government had to step in and loan funds to the banks to save the system.

Shockingly the intended effect of the Dodd-Frank bill crafted by two people with little actual knowledge of the banking industry worked in reverse. Because of the huge cost of regulations created by the bill and prior regulation, the number of banks has plummeted from 12,000 in 1995 to fewer than 6,000 in 2012. In 2012, the total numbers of banks decreased by 350 even though the economy had been in recovery for three years.

Mainly because of regulations smaller banks are being crippled, and bankers interested in startups are foregoing opportunities. A president of a regional bank told me that 10 years ago they had five people dedicated to dealing with regulations. They now have 100 full-time employees working to keep the government at bay. New regulations have shut down the second trust deed business in California. Wells Fargo has taken over a massive share of the home loan market. No one sees this getting any better because Dodd-Frank just started to actually go into effect, and the Consumer Financial Protection Bureau is just beginning to attack the free market in the name of protecting the average citizen.

Which brings to mind this thought: Perhaps this column should not have been written because the government do-gooders could start to destroy the brewery business as well, in the name of protecting us from ourselves. More importantly, wait until the next economic downturn to see how much money has to shuttle out to the big five banks to keep us from economic Armageddon. That is what happens when you have 2,000-page bills written by no-nothings.