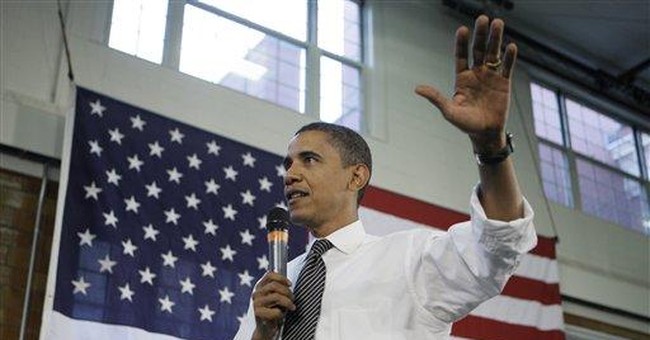 He says it wherever he goes these days. He said it in his convention speech. He said it in his interview on the O’Reilly Factor. He is saying it regularly on the stump. Senator Obama says that he is going to cut taxes for 95% of Americans. Sometimes he says 95% of working Americans and sometimes he says 95% of working families. Anyway you state it, it cannot be done.

Mr. Obama seems not to be aware that in the last analysis of income taxes paid to the U.S. Treasury (in 2006), taxpayers whose earnings were in the lowest 50% paid only 3% of our total tax burden. That means most of these taxpayers paid almost nothing. The next lowest earning 25% of taxpayers paid only 11% of the total tax burden. Collectively, this means the lowest 75% of earners paid only 14% of the current income taxes collected in this country. Since 75% of Americans are already paying little or no taxes, how do you cut the taxes for 95% of Americans?

Nobody who has interviewed Mr. Obama thus far on the subject knows how to ask the right questions. However, we can suppose what the Mr. Obama’s thoughts might be on this subject. Perhaps he just doesn’t know what he is talking about, and his statements are campaign rhetoric. Mr. Obama has gotten through roughly 20 months of campaigning without having to answer very many tough questions. He may be thinking he can also get by on this subject. The more he says that he is going to cut the taxes for 95% of Americans, the more it becomes a believable mantra.

There is a means of accomplishing this plan. It is to increase the earned income tax credit. That term may not mean much to you, but this credit has been part of the tax code since 1975 and has increased significantly over the years. This credit reduces the income taxes due for workers with a child or children. The interesting aspect of this credit is it is a refundable credit, meaning people not only get their income taxes erased, but they also receive a handout from the federal government. With two children and little taxable income one could receive up to $4,716 in 2007.

So it appears the plan that Mr. Obama has is to reduce or eliminate the relatively small amount paid by the 75%. He has stated he wants to take another 15 million people off the tax rolls. Then he will hand out additional money to the remaining people who are already not paying any taxes. The question is how can you reduce one’s taxes when they have not paid in any in the first place?

The argument for this is that these people are paying onerous payroll taxes; i.e., Social Security and Medicare. So the refunds are to offset those payments. The question that no one seems willing to ask Mr. Obama is this: Senator, are the Social Security and Medicare systems retirement plans or welfare programs? We keep being told that these programs are to take care of Americans when they retire and they were originally designed to take care of people who paid into the plans. Now people are being told they are going to get these benefits regardless of whether they paid into the programs in the first place.

Another question Mr. Obama needs to answer concerns the shrinking taxpayer’s rolls. We have built this country on shared responsibility. We have had a progressive tax system, but all Americans have shared the burden. Now we have a system where the top 5% of earners get 37% of the total earnings and 60% of the tax burden -- which is the highest rate in history. Mr. Obama wants to have those 5% of Americans pay even more of the overall load and exempt even more people from any taxes.

So I have some additional questions for the senator:

1. Mr. Obama, with over 50% of the voters paying almost nothing, what is to stop them from voting even more confiscatory tax rates upon the others who are paying?

2. When you are giving money out to an ever-larger share of the taxpayer population, what stops them from voting a greater payment to themselves?

3. Finally Senator, are you concerned that this structure will destroy our entire economic system and drive the high earners to other means or even other countries?

These are the questions that need to be asked Senator Obama. If he is not concerned I can tell you that I certainly am concerned - deeply concerned.