Race of the Day: Pelosi Puppet Vulnerable in Ill.-14 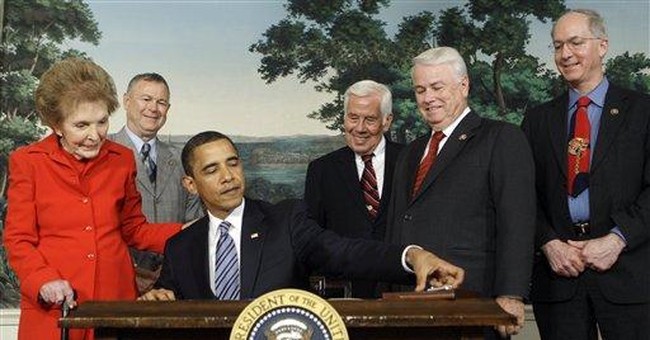 Following the GOP loss of this seat in the Democrat wave year of 2008, Illinois’s 14th Congressional District will be an ideological battle ground this November.  The upcoming election gives voters a clear choice for the future of America, pitting Pelosi Puppet Bill Foster against Republican State Senator and businessman Randy Hultgren.

The 14th district begins in the suburbs of Chicago and stretches West towards the Iowa border. This is the seat of former Speaker of the House Dennis Hastert and includes the townships of Aurora, Batavia, De Kalb, and Ronald Reagan’s boyhood home of Dixon.  Situated in President Barack Obama’s backyard, he won the district with 55% of the vote in 2008. However, having been held by Republicans from 1939-2008, this R+1 district was won by President Bush in both 2000 and 2004 and is a prime pickup opportunity this fall.

Although only serving in his first full term, Bill Foster has quickly jumped on the Pelosi bandwagon, voting for her agenda 92.1% of the time.  In just over two years he has provided plenty of evidence that he cares little about the best interests of his constituents.  Foster cast supporting votes for Pelosi’s budget, stimulus, and government takeover of healthcare, and is also a co-sponsor for the House version of Card Check.  One contributing factor to Foster’s 2008 victory in both the special and general election was his propensity to piggy-backing off of Obama’s “hope and change” message - but lacking those considerable coattails, he’ll have a much tougher re-election contest this fall.

Having lived in the district most of his life, Randy Hultgren has an accomplished record in both the public and private sectors, and his campaign is generating strong grassroots support throughout the district.  His state senate seat covers the eastern portion of the 14th district, which he has represented since 2007 having previously served in the State House of Representatives.  Randy has been consistently recognized by organizations such as the National Federation of Independent Businesses and Illinois Chamber of Commerce for his efforts to reduce taxes, healthcare costs and government waste in a fiscally responsible manner – skills we can all agree are much needed in Washington.

Over the past several weeks, independent political handicapper Stu Rothenberg has announced updates that highlight the competitiveness in Illinois.  Despite Fosters’ 58-42% victory over Jim Oberwise in 2008, Rothenberg has rated IL-14 as “pure toss-up” and showed polling information that has the Democrat even with Randy.  Republicans have the right candidate in place to reclaim this seat in November, when Foster will have to answer for his reckless voting record and complete disregard for the well-being of those in his district.

I hope you’ll take a minute to learn more about Randy and this exciting race on his website and check out his Facebook page for the latest news and developments.