What Is Rand Paul Thinking With This Endorsement?

Brian McNicoll
|
Posted: Jul 24, 2021 12:01 AM
Share   Tweet
The opinions expressed by columnists are their own and do not necessarily represent the views of Townhall.com. 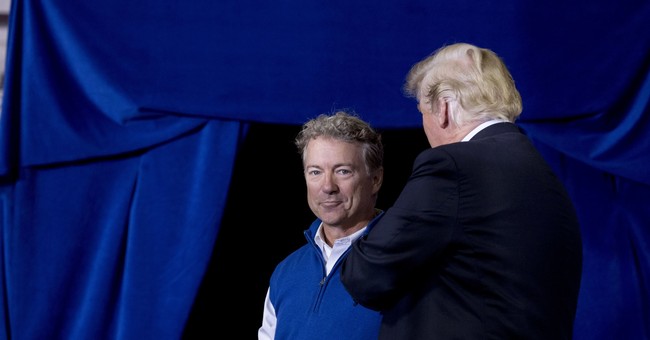 With the departure of Justin Amash, Sen. Rand Paul, R-Ky., is the closest thing to a libertarian left in Congress. So it is not surprising that a political action committee aligned with the senator would work to identify and promote libertarian candidates, nor that it would endorse them in primary races.

And it is not surprising that Paul would endorse the more libertarian candidate in a Republican primary, even if President Trump had endorsed a rival.

But it is somewhat surprising to see Paul endorse and help fund and fund a candidate s seemingly unready for prime time as Ron Hood.

In the one and only campaign finance report we will see before the Aug. 3 primary, Hood raised a measly $155,000 and, from that, is paying himself a $6,000 per month salary to campaign. But he’s being kept alive in the race by $640,000 from the Paul-controlled Project Freedom PAC.

President Trump is backing Mike Carey, who says his internal polling shows him well ahead of the other 10 Republican candidates. Carey raised $460,000 in cash excluding PAC help. State Sen. Bob Peterson trails closely with $455,000 raised, including a $5,800 personal loan from the candidate.

Jeff LaRe, another state senator, raised $227,000 and got $300,000 worth of support from Steve Stivers, a Republican whose resignation of the seat to become head of the Ohio Chamber of Commerce created the opening. Even Ruth Edmonds outraised Hood.

So why would Paul break with former President Donald Trump, still the titular head of the part, to endorse Hood, a candidate with a variety of shortcomings who may or may not have a job, can’t crack the top five in fundraising and wouldn’t be able to compete at all without his help?

For years when he served in the Ohio House of Representatives and even now on his campaign website, Hood listed his job as “marketing consultant” for the American Way Investors Corporation, which attempts to recruit investors for small real estate projects in the Midwest. He provides two addresses for his office, one of which appears to be for a senior living facility – a curious place for a branch office for such a business.

When he’s not doing real estate deals, he’s into multilevel marketing. He claims in his disclosures to have worked for MonaVie, which sold dietary supplements in the form of blended fruit juice concentrates, powders and purees until it was shut down over disputes about its health claims.

But Paul’s focus is on promoting libertarian candidates, and his support of Hood’s candidacy highlights a longstanding problem within libertarianism – a failure to produce leaders who are acceptable to voters.

In the 2016 presidential cycle, its nominees were Smoke and Drink – the pot-smoking Gary Johnson, former governor of New Mexico, and the William Weld, who once passed out at a commencement speech from alcohol and slurred his way through his inauguration speech when he became governor of Massachusetts.

Its 2020 presidential candidate, Jo Jorgensen, is a professor at Clemson. But her opponents for the nomination included a man who wanted the federal government to sell marijuana, then tax it at 9 percent to pay for the space program, and another who was convinced the deep state was spying on us through our televisions and the death of Justice Antonin Scalia was faked.

“We set a fairly low bar to be recognized as a candidate,” Carla Howell, the Libertarian Party’s political director in 2016, said at the party’s convention.

Paul has to know Hood is not the best candidate. He once backed a bill that would require doctors to reimplant ectopic pregnancies into the uterus, which some say is medically impossible but all would agree does not sound terribly libertarian.

He was twice knocked out of his state House seat, and in his last race, for a school board seat, he got just 35 percent of the vote.

So why walk the plank for Hood? Why put your name on the line for a candidate with no fundraising ability, questionable job prospects and some un-libertarian ideas? Is the libertarian bench really that shallow?

If so, maybe some of the funds should be redirected toward candidate recruitment.