Brian McNicoll
|
Posted: Aug 09, 2017 12:26 PM
Share   Tweet
The opinions expressed by columnists are their own and do not necessarily represent the views of Townhall.com. 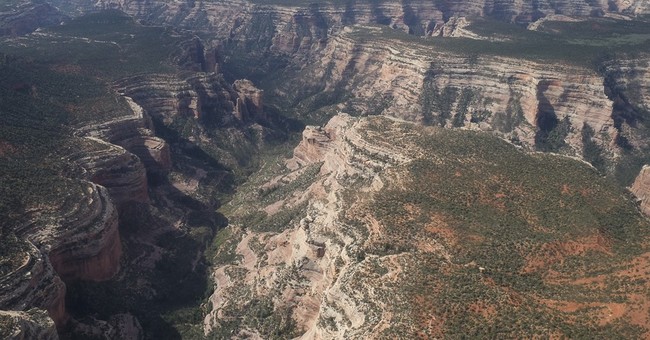 As is the case in a number of areas – North Korea, taxes, trade, national security, health care – the Trump administration is spending its first year in office cleaning up messes left by its predecessors. But the trick is do it right – ensure the changes actually help and that they could not be as easily undone should another president in Obama’s vein emerge.

Take, for instance, the Antiquities Act of 1906. The law, the first in the United States to provide general protection for any kind of cultural or natural resource, gives presidents the power to designate historical landmarks, historic and prehistoric structures as national monuments and order the relevant agencies to preserve them.

Before the law, areas such as Yellowstone and the Casa Grande Ruin in Arizona, were designated by the president, but each individual designation required congressional approval. The Antiquities Act made it so presidents could designate the areas themselves.

In an effort to thwart mining and energy exploration in its final months in office, the Obama administration designated a number of such monuments, much to the chagrin of office-holders and citizens in those states.

President Trump, at the urging of Sen. Orrin Hatch, R-Utah, and the entire Utah congressional delegation, signed an executive order in April that calls for Secretary of the Interior Ryan Zinke to review the Antiquities Act with an eye toward reversing some of the national monument designations. The move was applauded by conservatives and property rights activists, who point out the federal government owns nearly 40 percent of American land, and, combined with state and local governments, own more than 50 percent of the country.

“We feel that the public, the people that monuments affect, should be considered and that is why the president is asking for a review of the monuments designated in the last 20 years,” Zinke said when the executive order was announced. The review, he said, is “long overdue.”

Although a number of monuments are under consideration, the prize is the Bears Ears National Monument, designated in mid-2016. It’s a 1.3-million-acre parcel that includes rock climbing, cliff dwellings and land various Indian tribes, including the Pueblos, claim to be sacred. Zinke promised a report in 45 days, which has long passed.

Citizens opposed the federal takeover. Federal office holders in Utah opposed the federal takeover. The state of Utah even had a plan – endorsed by all relevant stakeholders – to preserve and care for these parks. But that wasn’t enough for Obama, who couldn’t stand the thought of anyone actually having a job made possible by uses of that park land.

The problem is, under the Antiquities Act, presidents can add monuments, but they do not seem to be able to subtract them.

Bruce Fein, a constitutional attorney in Washington, explained it this way in the Washington Times:

“If a president signs a bill passed by Congress, it becomes law. A successor president may not repeal the law by a proclamation renouncing his predecessor’s signature. The Antiquities Act works in the same way. A presidential proclamation declaring a national monument may not be unilaterally revoked by a successor president. That would require new revocation legislation passed by Congress and signed by the new president.”

No president even has attempted to revoke a national monument designation in the law’s 111-year history, Fein said, and a 1938 opinion from Homer Cummings, attorney general under President Franklin Roosevelt underscored the president has no clear authority to “abolish” national monuments.

No one has even challenged Cummings’ finding, and by now, Fein said, it would fall under the Supreme Court’s “acquiescence rule,” which says if Congress or the executive does not overturn a judicial or administrative interpretation of a statute, it probably acquiesces it.

Zinke conceded the notion of un-designating a monument has not been seriously entertained, although he said he “gets sued all the time” and does not mind taking on a good fight. But that is what this would be – a good, long, hard, expensive fight in which the interests of real people living in affected areas could be measured against those calling the shots from thousands of miles away. If you’re not living in Utah, what business is it of yours who takes care of Bears Ears?

But the fact is Fein probably is right, and legislation probably is required to achieve the end of the monuments. Sen. Hatch, Gov. Gary Herbert, a Republican, and the rest of the public officials in Utah are right the federal government had no business designating Bears Ears a monument. If it had been in disrepair, that would be one thing. If it did not have a phalanx of public servants pledged to its preservation, that would be another thing.

But to have those elements in place and ignore them shows the federal government has too much power in this arrangement. It’s time to rein in that power. But do it right, Sen. Hatch. Change the law. You’ll have more support than you know.