Brian McNicoll
|
Posted: Jan 10, 2017 10:28 AM
Share   Tweet
The opinions expressed by columnists are their own and do not necessarily represent the views of Townhall.com. 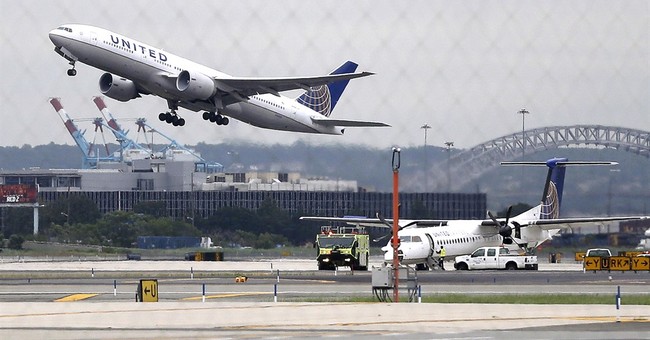 But in one of the needier sectors of infrastructure, the answer might be for the government to spend much less.

America’s airports are in bad shape. None rank in the top 25 in the world. Many of the busiest, such as O’Hara in Chicago and Liberty in Newark, N.J., are among the worst. President-elect Trump has called LaGuardia, his home airport in New York, “a third-world dump.”

When Rep. Bill Shuster, R-Pa., chairman of the House Transportation and Infrastructure Committee, takes up legislation to improve America’s roads, bridges and airports, he should take the advice of members such as Rep. Thomas Massie, R-Ky., and privatize everything.

Private air-traffic control as Canada and much of Europe has. Privatize airports. Allow private ownership of the facilities themselves as others have done all over the world. End the Airport Improvement Program, in which taxpayers send money to Washington to dole out to local airports, and let airports raise their own money for their own improvements.

Improve Open Skies, the program by which the U.S. makes deals with foreign carriers to compete in each other’s markets. Big domestic airlines have been helped along to dominance by government intervention long enough. Improve competition among airlines, airports and air-related services.

What do we have to lose? Our air infrastructure clearly is run by the people who brought us Amtrak. The American Society of Civil Engineers

“Given little economic incentive and saddled with institutional and political constraints, major airports and the air traffic control system have not exhibited any marked improvement in their performance for decades despite repeated assurances that they would do so,” wrote scholars Steven Morrison and Clifford Winston for the left-leaning Brookings Institution.

According to a study by Airports Council International, in 2010, about a quarter of the airports in the 28 European Union countries were mostly or fully privately owned and run. Today, 47 percent are, and those airports carry 75 percent of the traffic in Europe.

The main airports in Antwerp, Budapest, Edinburg, Glasgow, Lisbon, Liverpool, Ljubljana, London and Zagrebg all are fully private, and those in Birmingham, Brussels, Copenhagen, Florence, Naples, Rome, Venice, Vienna, Zurich and other cities are “mostly private.”

The Organization for Economic Cooperation and Development found “overwhelming support for the notion that privatization brings about a significant increase in the profitability, real output and efficiency of privatized companies.” A study in the Journal of Economic Literature said privatization “appears to improve performance measured in many different ways, in many different countries.”

Meanwhile, we’re stuck with a top-down, command-and-control system that reduces innovation, wastes money and drives up costs for passengers at America’s 3,300 airports.

Funded by federal taxes on commercial airline passengers and a number of aviation activities, the Airport Improvement Program provides $3.3 billion per year in federal grants for improvements at public airports. Those improvements generally are limited to runways and taxiways and are strictly regulated.

But even with the emphasis on expanding runways and taxiways, America’s planes continue to run late. The Federal Aviation Administration says we lost $22 billion to airport congestion and delays in 2012 and will lose $34 billion by 2020 unless problems are addressed.

Airports can raise some money on their own through passenger facilities charges, but they are capped at $4.50 per passenger. The limit should be nixed, the Airport Improvement Program ended and the airports of America set up to raise their own money for their own improvements.

For the first time in years, there’s real momentum and energy for reform. An infrastructure initiative is coming, and measures that save the government money should take precedence in what will be a costly endeavor.

It’s time to put the Airport Improvement Program and all needlessly bureaucratic top-down management of the air travel industry to rest and give entrepreneurism and innovation a chance to improve the lot of America’s travelers.