Brian McNicoll
|
Posted: Mar 13, 2016 12:01 AM
Share   Tweet
The opinions expressed by columnists are their own and do not necessarily represent the views of Townhall.com. 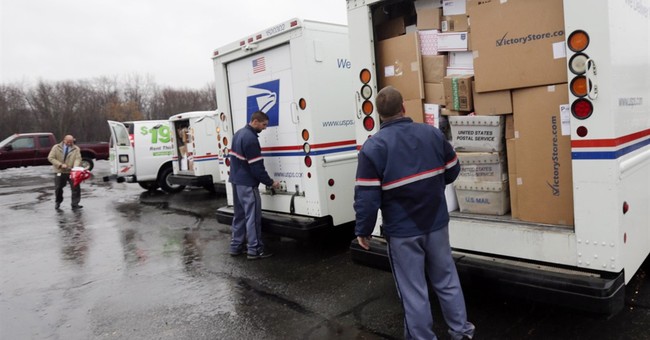 Yes, the U.S. Postal Service turned a profit in the first quarter of fiscal 2016. But it’s unlikely to be able to do so again in the near future.

But packages are more expensive to handle than first-class mail. So, although revenues were up 3.3 percent over the same quarter last year, total work hours increased 3 percent, compensation 2 percent and transportation costs 7.7 percent.

Its competitors contend the costs would look even worse if the Postal Service properly accounted for the resources it uses in its monopoly-protected mail delivery businesses for its businesses that compete with them.

Postal officials raced out to dampen the optimism, saying the first quarter profit is “not a bellwether” for the entire year.

They said the $307 million in actual profit – after the Postal Service’s required pre-funding of retirement and pension benefits – would have been a $700 million loss without a 4-cents-per-piece surcharge set to expire in April and the favorable interest rates.

“While net income is favorable compared to a net loss, it unfortunately does not reflect the end of our losses,” Chief Financial Officer and Executive Vice President Joseph Corbett said.

Postmaster General Megan Brennan used the occasion of the first quarterly profit since 2011 to make another plea for iPOST – the Improving Postal Operations, Service and Transparency Act of 2015. The first legitimate attempt postal reform since 2006 would restructure the system by which the Postal Service prefunds its pensions and benefits and, among other things, retain the 4-cent surcharge.

Some restructuring may be appropriate. The plan for the Postal Service to pay $5 billion per year for 10 years to prefund 75 years of benefits was hatched just before the financial meltdown and just as the Internet was about to break through as an alternative to mail – massive twin setbacks from which it has not recovered.

First-class mail dropped more than a third in the first six years after the meltdown and could drop another 30 percent by 2020. Today, household-to-household mail – cards, letters, etc., from one person to another – account for 1.3 percent of all mail. And Americans pay only a third of their bills through the mail now, down from nearly 70 percent in 2004.

But as more postal workers retire and the workforce continues to shrink, the Postal Service no longer can count on current employees to subsidize retirees. Some element of saving for future medical and pension expenses is essential if taxpayers are not to be left exposed to these potentially enormous levels of debt. Total liability – the amount owed to retirees but not paid – stood at $94 billion in 2013, and the Postal Service has burned through a $15 billion line of credit from the Treasury.

This is particularly true given the proclivity of the Postal Service to pursue outside lines of business beyond its expertise or ability to make a profit. It profited in the first quarter of 2016 because it was allowed to do what it does best – deliver mail and packages to 170 million homes and businesses. It hired 30,000 seasonal workers, ramped up to three delivery shifts a day in some markets and served about 25,000 routes on Sundays, up from its usual 4,000.

But Brennan said making permanent the surcharge is an important first step toward returning to a feasible fiscal course. It would mean about $2 billion for the Postal Service’s bottom line and could turn a few quarters from red to black.

Mailers oppose retaining the surcharge. They point out the surcharge was granted on a temporary basis to help the Postal Service cope with the effects of the recession. The recession is over, they say, and the surcharge should end as well. Until this is resolved, iPOST is unlikely to move forward.

A profitable quarter is good news. But if the Postal Service truly is to turn around its fiscal situation, it will need to continue to stick to what Americans need it to do – deliver those 155 billion pieces of mail to our homes and businesses on time – and resist the urge to run fish markets, traffic in booze or deliver groceries.