Statehood for D.C. is Unconstitutional and a Partisan Power Grab

Brian Darling
|
Posted: Jan 29, 2022 12:01 AM
Share   Tweet
The opinions expressed by columnists are their own and do not necessarily represent the views of Townhall.com. 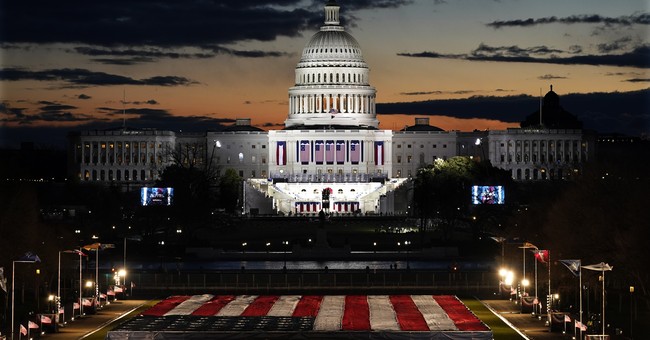 One pervasive talking point that Republicans have used in the past few months as a way to define the Democratic Party as way out of the mainstream of American thought is to point out Democratic support for defunding the police, Critical Race Theory in public schools, a trillion dollar Build Back Better Plan, packing the Supreme Court with left wingers, and expanding the House and Senate with new Democratic Party members from newly created states.

This effort to demonize Democrats is working as evidenced by cratering popularity of President Joe Biden, Vice President Kamala Harris and Democrats in Congress. The Real Clear Politics average of polls has President Biden underwater by -11.3% favorable versus unfavorable with Vice President Harris at -15.1%. The RCP average of polls has Republicans +3.1% on a 2022 generic congressional vote with Rasmussen having Republicans up by 9%. The numbers indicate that Republicans are on the cusp of a takeover of both the House and Senate.

The rhetoric is working.  The statehood taking point is something that Republicans should treat with more nuance. Republicans have never supported D.C. statehood, but they have repeatedly supported statehood for P.R. When Sen. John Barrasso (R-WY) chaired the committee drafting the platform for the GOP back in 2016, that then candidate Donald J. Trump ran on, the platform contained a provision endorsing statehood for Puerto Rico. Juxtapose this with the fact that the hard left, including Rep. Alexandria Ocasio-Cortez (D-NY) oppose statehood, and you can see that this issue is more complex than a talking point. AOC has even made it clear that she unequivocally supports D.C. statehood while wanting to put obstructions to stop Puerto Rican statehood. The two issues are very different.

The idea of making D.C. a state is something Democrats have been pushing for years because they are guaranteed two new Senators and several new members of the House of Representatives. As a preliminary matter, the idea of making D.C. a state is unconstitutional. The Heritage Foundation put out a report back in 1993 pointing out two constitutional provisions that prevent D.C. statehood. “Article I, Section 8 of the Constitution gives the Congress plenary authority over the District, therefore “making the District a full state, therefore, would be an abrogation of power that the Constitution explicitly assigns to Congress alone.” He also argued that “Article IV, Section 3 … provides that no new state may be created out of the territory of an existing state without that state's permission.” Because Maryland originally gave the territory contained in current day D.C. to the federal government for use as the seat of the government, Maryland would have to consent.

As a purely partisan issue, D.C. statehood is a nonstarter for Republicans. In the last presidential election, President Donald Trump received 5.3% of the DC vote versus 92.1% for Joe Biden. That election was not an outlier. Back in 2004 D.C. went for John Kerry at 89.2% versus President George W. Bush at 9.3%. Those are numbers you would expect to be produced in a communist country with unfree elections. Republicans are on firm ground blocking D.C. statehood on both constitutional and partisan grounds.

On the other hand, making the Commonwealth of Puerto Rico a state raises some policy concerns for many Republicans, but not constitutional nor partisan ones. When you look at the constitution, Article IV, Section 3 designates Congress as the entity to admit new states. This has been done thirty-seven times. On the partisan side, Ryan Ellis wrote in the Washington Examiner last year, “Puerto Rican statehood is something that goes back a long way. It’s been a part of Republican convention platforms (including the current one) and has enjoyed the support of every modern Republican president (counting candidate Trump in 2016).” The current ‘Resident Commissioner’ representing Puerto Rico in Congress is Jenniffer Gonzalez-Colon who caucuses with Republicans. In addition, Puerto Rico recently has had a Republican governor and control of both chambers of the Commonwealth’s legislature. A Puerto Rican state would likely be a purple state with a mix of Republicans and Democrats in Congress.

When you hear people like opinion leaders like Fox News host Sean Hannity and leading members of the Congress lump D.C. and Puerto Rican statehood together, they are comparing apples to oranges. All Republicans need not support statehood for Puerto Rico if they have policy objections, yet they should stop lumping the two very different cases for statehood together in one lazy talking point.