Brian Darling
|
Posted: Sep 10, 2020 12:01 AM
Share   Tweet
The opinions expressed by columnists are their own and do not necessarily represent the views of Townhall.com. 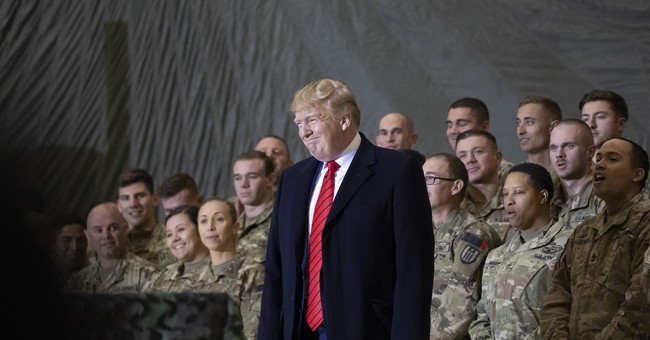 The Trump Administration is floating the idea that the president is planning to pull thousands of troops out of Iraq and drawing down in Afghanistan. This is great news.

Another good sign of things to come is that the name William Ruger, an Afghan war skeptic, is being floated as a possible next U.S. Ambassador to Afghanistan. Ending the Afghanistan war and installing an Ambassador that supports the President’s promise to end the endless wars would complete a promise to the libertairain-ish wing of the Republican Party who voted for President Donald J. Trump in 2016 and want to support him in 2020.

It is a great development that President Trump is considering a new Ambassador to Afghanistan who supports his agenda. Politico reported on July 17, 2020, “President Donald Trump is considering nominating Will Ruger, a Koch-affiliated foreign policy expert who wants to pull all American troops out of Afghanistan, to be the U.S. ambassador to that war-torn country, according to a person with direct knowledge of the matter.” This administration has too many staffers who do not support the president’s agenda and the Ruger nomination would change the trajectory of the Trump Administration by loading up with individuals who want to implement the Trump agenda.

Will Ruger would be a great choice to lead the pullout in Afghanistan on the diplomatic site, yet he will have enemies in Congress seeking to block his nomination. Many of the so-called ‘Hawks’ in Congress like Rep. Liz Cheney (R-WY) and a number of Republican senators who voted against a withdrawal on February 4, 2019 on a resolution authored by Senate Majority Leader Mitch McConnell (R-KY). President Trump’s idea to end the war in Afghanistan does not have majority support by Republicans in the Senate and they will fight it. The problem with the interventionist ideas of some Republicans is that they have had almost 19 years of constant war to show evidence of progress in war torn Iraq and Afghanistan, yet the evidence is lacking to show any sustained improvement.

When early reports indicated that the president was serious about withdrawing troops from Afghanistan, Will Ruger argued that the U.S. “long ago accomplished what we originally set out to do in the country, and after almost two decades, it is time to bring our brave troops home and for Afghans to take ownership of their country’s future.” Ruger made the argument that no deal with the Taliban was needed to end the war and “the president should not allow a withdrawal deal to be bogged down by conditions that aren’t necessary for America’s safety.”  One expects that the more Hawkish members of the Senate have already called over to the White House to stop Ruger from being nominated.

Ruger wrote at Real Clear Politics on October 18, 2018, “when Operation Enduring Freedom kicked off on Oct. 7, 2001, in the wake of the 9/11 attacks, few would have thought we’d still be there fighting the Taliban nearly two decades later. Heck, I doubt I thought we’d still be fighting today when deploying there myself ‘only’ 10 years ago this month.” He made the case that this was a “forever war” where there is “no plausible theory of victory.” In 2020, there is still no reason why we can’t focus resources on rebuilding and defending the homeland.  As my former boss, Sen. Rand Paul, would say, why are we building roads and bridges in Afghanistan and Iraq when we could be building them here.

Also, think about the real threats to American citizens. The possibility of nuclear war is matched by an American missile defense battery that President Trump is rebuilding. The threat of terrorism here at home is a focus of the Trump Administration and his efforts to limit entry from some dangerous countries known as radical havens. Keeping troops in Afghanistan is not protecting American citizens from any credible threats.

The brave men and women who volunteer to fight for our country would be better served not being deployed to far away regions where there are radicals intent on targeting them just for being Americans. Our war fighters are trained to destroy the enemy and they should be fighting to protect Americans at home; not fighting for some nebulous vision of democracy and peace in a far away and politically stilted nation.