Brian Darling
|
Posted: Jun 12, 2018 12:01 AM
Share   Tweet
The opinions expressed by columnists are their own and do not necessarily represent the views of Townhall.com. 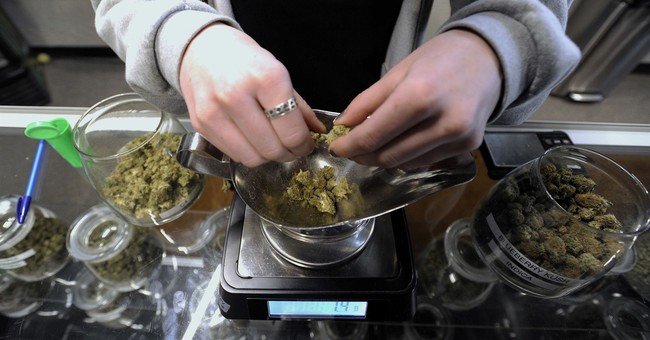 Last week, a bipartisan coalition of House and Senate members introduced legislation to end the federal war on marijuana. Unlikely allies - conservative Sens. Cory Gardner (R-CO) and liberal Elizabeth Warren (D-MA) introduced a bill that would allow the citizens of the states to control decisions on medical and adult use marijuana.  In our highly partisan America there are still a handful of issues that can bring together the right and the left.

The problem with marijuana laws today is twofold. First, there is a conflict of laws between the feds with strong laws prohibiting any use, possession or sale of marijuana versus states that have either allowed medical or adult use marijuana within the state’s border.   Second, there is a conflict of politics between the old school mentality supporting the “War on Drugs” embodied by Attorney General Jeff Sessions and opposed by many Republicans including Rep. Dana Rohrabacher (R-CA), former Speaker of the House John Boehner, Sen. Mike Lee (R-UT) and President Donald J. Trump. One would think that the attorney general would follow the policies promoted by the attorney general's boss, the president, yet Sessions seems to revel in angering the one man who can send him to the private sector with a single tweet.

The federal Controlled Substances Act (CSA) treats marijuana as a highly dangerous drug with heavy federal penalties for violating that law.  Right now, federal law hits a person with a 10-year mandatory minimum for possession of 1,000 KG of marijuana no matter if you are in a state that allows it or not.   The idea that somebody would be locked up for growing marijuana under a mandatory sentence seems ridiculous when states are passing law after law permitting this exact activity.

When you look at how the states treat marijuana, the trend is clear that the states are far more accepting of different levels and circumstances of marijuana use. Forty-six states, Puerto Rico, Guam and a number of tribes have laws that permit or decriminalized marijuana or marijuana-based products according to a U.S. Senate fact sheet.   Medical marijuana laws are the most popular with a Quinnipiac poll from 2017 indicating 94% of Americans support them.  When you look at polling on what Colorado has done by legalizing adult use marijuana, according to a 2017 Gallup poll, 64% of Americans support full legalization.

The conflict between federal and state law can’t stand. The federal government should respect the traditional police powers of the states that allow them to handle crimes within the borders.  Federalism, and the 10th Amendment to the Constitution, allows the powers not specifically delegated to the federal government to reside with the states and the people.  There is no specific federal authorization for the regulation of marijuana, therefore it might finally be the time to let the states take back the police powers of regulating marijuana.

Attorney General Jeff Sessions wants to go back to the days when a marijuana joint got you locked up with hardened violent criminals for a year or two.  The Wall Street Journal reported on June 10, 2018 that “Attorney General Jeff Sessions vowed to use federal law to get tough on marijuana, announcing in January he was ending Obama-era protections for the nascent pot industry in states where it is legal. Six months into his mission, he is largely going it alone.”  His prosecutors have not brought any federal charges and he has inspired supporters of legal marijuana when he revoked the so called “Cole Memo” earlier this year that had provided some protections for state operators of legal marijuana businesses.  The WSJ also reported that President Trump indicated he was likely to support federalism in the marijuana bill.

The bill is simple. The STATES Act, “Strengthening the Tenth Amendment Through Entrusting States Act,” amends the CSA and allows states and tribes that comply with a few basic protections and removes the application of that law to persons in those states or members of those tribes who are acting under the color of state marijuana laws.  The federal law would exempt compliant marijuana transactions from trafficking laws and would remove industrial hemp from the list of controlled substances. There are restrictions on the states, including measures to forbid those who are under 18 from participating in manufacturing and 21 from purchasing adult use.  This would revolutionize the treatment of marijuana and allow individuals to work in the marijuana industry without fear of being locked up.  With an untenable conflict between the federal law and state law, the STATES Act provides the states the power to opt out of the CSA.

When you can get conservative Cory Gardner who is in charge of getting Republicans elected to the Senate and probable Democratic presidential candidate, and progressive hero, Elizabeth Warren on the same page on any issue, then you have done something extraordinary. This idea is long overdue and we can hope the broad bipartisan support leads to some movement on this issue this year.