The Supreme Court, Race, and the St. Louis Post-Dispatch 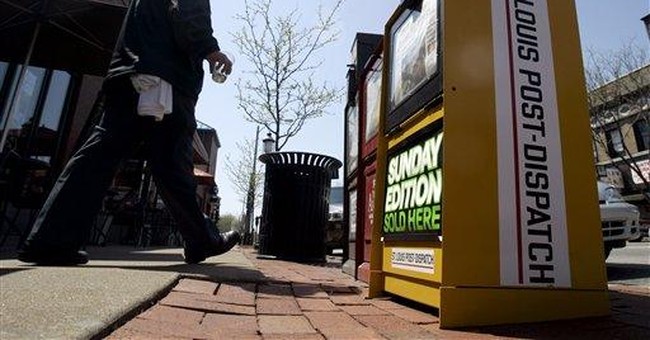 Last week the venerable St. Louis-Post-Dispatch, a once great American newspaper, proved that she is but a shell of her former self. The PD has a long and generally distinguished history including launching the career of Joseph Pulitzer in the 1880s, and in scooping all of the major papers on the disastrous sinking of the RMS Titanic in April of 1912. Today, the PD is the sole daily newspaper in a major metropolitan area, and, as such has no competition to push her to improve and to stay at the top of her game. This column does not however, deal with the beauty of competition and its importance to the free enterprise system. Rather, it deals with the hazards of a single newspaper exercising an editorial monopoly over a major metropolitan area. These hazards include a refusal to engage in reasoned debate, a constant tendency to assassinate the character of those who disagree with them, regularly accusing their opponents of low motives, insisting that their own country has a deplorable history, and, all the while, preening and showing off their own supposed moral superiority.

Simply stated, the PD mouths all of the platitudes common to the American Left, and has become nothing more than a shill for the national Democratic Party. Furthermore, in a manner reminiscent of our dear national leader, the newspaper will not engage in any discourse on current issues. They simply say that the issue has been decided and you are one of the good people or one of the bad people. Their coverage of the Obamacare fiasco is a case in point. The PD declined to do any reportorial work of their own on the issue, and simply accepted White House talking points. Their stock answer to any claims about the effect the ACA was having on real people was to dismiss all of these as “…lies, easily debunked.” Worse yet, the PD actually plagiarized when they reported Washington Post commentator Eugene Robinson’s words, verbatim, in a PD editorial without attribution. This author called them on their journalistic malpractice, and Tony Messenger, the newspaper editor stated that this was not plagiarism, because “…many smart people think this is true, ergo there is nothing wrong with repeating it.” A great newspaper, indeed!

The Post-Dispatch was in rare form last week, attacking the U.S. Supreme Court for voting 6-2 to uphold the state of Michigan’s ban on affirmative action in public universities. In their editorial entitled, “Sotomayor’s Stand” of last week the newspaper stooped, once again, to the low practice of turning all political, legal, and cultural questions into morality plays wherein the forces of goodness and light are those who share the PD view of things, and the forces of error and darkness are those who dare to think differently, which to say, those who disdain the leadership of the Post-Dispatch, and prefer to think for themselves.

As the title of the editorial indicates the PD lauded Justice Sonia Sotomayor, much as she has publicly lauded herself, for rising above “…a modest South Bronx upbringing to a seat on the nation’s highest court…” The newspaper credited the greatness of government mandated affirmative action as the key to Ms. Sotomayor’s success and implied that no minority can hope to succeed in America without overt government assistance. In the PD view of things the only way a minority citizen of the USA can rise from humble origins to a better status is through government mandated favoritism and preference. This would come as a surprise to anyone who actually lived the American Dream and moved up in the world through the tried-and-true method of persistence, diligence and hard work. To suggest, as the PD regularly does, that the only path to success for minority citizens in America is through government mandated affirmative action is paternalism, condescension, and even racism of the worst order. Does the Post-Dispatch really believe that no minority citizens can succeed on their own, without the help of government policies, guided by the PD?

The editorial goes on to remark, “Now the Roberts court, ignoring this nation’s ugly history…is leaving it to the states to decide whether minority populations will have access to public institutions.” Here, the PD allows its liberal slip to show. The Post-Dispatch editors believe, in their heart of hearts, that America is a bad country. They constantly hammer this home in their editorials and slanted news stories, which are full of choice comments like the previous quote. We are harangued that our great republic has “…an ugly history”. We are told that American history is a catalogue of calumnies, and that this is the fault of people who do not think like the editors at the PD, and refuse to accept the leadership of our betters in the prestige media.

This vignette shows a substantial difference between the New Left editors at the St. Louis Post-Dispatch, and the newspaper’s admittedly diminishing number of readers. The reading public does not accept the PD habit of regularly battering our country, and we certainly do not accept, uncritically, the contention that our national history is simply “ugly”. Certainly America has been less than perfect, and we must always strive to improve. However, America has been on the right side more often than not, and we do subscribe to certain ideals, even if we sometimes fall a bit short of these in practice. This is something known as “patriotism”, although that old-fashioned virtue cannot be found in the PD playbook.

The PD editorial on the Michigan case offers a window into the liberal mind at work today. The piece has a heroine, Justice Sonia Sotomayor, and two villains, namely Chief Justice John Roberts, and Justice Clarence Thomas. The work slings mud, assassinates the character of the supposed villains, and attributes low motives to anyone who agrees with them. The PD finishes the editorial with the requisite dollop of class and racial hatred, all the while ridiculing those who disagree and nearly bursting their own buttons with unconcealed self-regard and conceit.

While the St. Louis Post Dispatch is, perhaps, an extreme case this same liberal mindset can be seen in most of the metropolitan daily papers today. The liberal columnists at the New York Times, Washington Post, Los Angeles Times, Chicago Daily Tribune, Boston Globe, and the other major daily papers share the same views, and largely, the same tendency to demonize their opponents. Gone are the “Happy Warriors” of yesteryears journalism, the commentators who had strong opinions, but were willing to listen and give the opposition a fair hearing. The skeptical reader need only consult Dana Milbank, Maureen Dowd, Leonard Pitts, and the Post-Dispatch editor Tony Messenger for confirmation of this assertion. Still, these commentators will shake their heads at election time and wonder out loud: How has our civil discourse become so polarized?