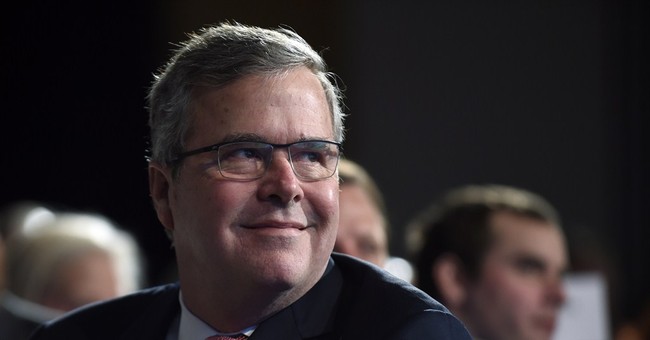 In politics as in life, past is prologue. Again, a Bush is the first candidate to announce that he may be running for president, this time in 2016. Jeb Bush’s announcement to seek the most consequential job on earth, made in the most underwhelming fashion -- a Facebook post -- has put the nation on notice: the 2016 presidential race has officially begun.

Coming on the heels of a historic Republican election, the Republican presidential primary is sure to be a bruising contest. Republicans across the country, from very different states, with very different styles and records, will each claim to be best qualified on the merits, and the best suited to oppose Hillary.

How does the field look at the beginning of 2015? Really, it’s Jeb verses the rest.

Jeb Bush has name recognition, Spanish language fluency, an impressive resume as a two-term governor of a vital swing state (Florida), and he will soon have the money advantage over his rivals, as he will fundraise unconstrained by the scheduling demands of governing, or the fundraising limits placed on officeholders by our campaign finance laws.

What of the other 2016 hopefuls? In Wisconsin, Governor Scott Walker won another tight election and burnished his legacy as a reformer and vanquisher of the public employee unions. But he has a somewhat limited profile nationally, and the country in 2012 rejected another conservative Wisconsinite, Paul Ryan.

In Ohio, Governor John Kasich cruised to re-election in the determinative swing state, but he consented to the Medicaid expansion of Obamacare, and lacks a national profile. In Louisiana, Governor Bobby Jindal has succeeded in turning around a failed state, but his state is not important in the Electoral College and his only experience on the national stage, a State of the Union rebuttal, was (he hopes) forgetful.

In New Jersey, Chris Christie has proven to be a mostly effective governor and his term as head of the Republican Governors Association saw the historic election of 31 Republican governors. However, New Jersey is not an important Republican state, Christie’s temperament does not seem well suited to a presidential campaign, and his refusal to criticize the president at times may cause many in the Republican base to question his party loyalty.

Last, outgoing Texas governor Rick Perry boasts a strong policy record and is a proven fundraiser, but his disappointing 2012 effort casts a shadow over any future run, and raises profound questions about his ability to package his record into a marketable commodity and sell it effectively.

What of the senators vying for a promotion? Rand Paul, Marco Rubio and Ted Cruz share similar disadvantages: each wields no governing power, has no executive experience, and will be in Mitch McConnell’s shadow for the next two years. And, president Obama has reminded the nation that senators don’t make good presidents.

Rand Paul will forever be tied to his father’s unsound ideas, and his own foreign policy inclinations seem unserious in a time when ISIS beheads Americans with impunity. Marco Rubio faltered with his early embrace of comprehensive immigration reform and in 2016, Rubio will have to choose between running for president and running for re-election.

Finally, Ted Cruz is not qualified to be president. His record of ineffective “me-first” procedural blunders as a senator, which enabled the government shutdown in 2013, and resulted in the confirmation of scores of Obama-nominated liberal judges in 2014 raises serious questions about his political judgment.

Which brings us back to Jeb Bush. Though Jeb’s last name conjures up memories of his brother’s tumultuous presidency, the Bushes are 3 for 4 in presidential elections, and Jeb’s gubernatorial record on charter school expansion, tax cuts, supporting gun rights and opposing abortion may help him ward off rightful criticisms over his support for Common Core, a contentious education initiative that invites further federal control over education policy.

With a national profile, a successful record of executive leadership, and the ability to fundraise and campaign full-time, Jeb is the prohibitive favorite. What he lacks at this point, and what may undo him ultimately, is the seeming lack of passion, both for his ideas, and against the Obama record.

The 2014 midterm elections were a referendum on President Obama and his ideology; both lost big. In order to win over 2016’s Republican primary voters, who were 2014’s midterm voters, Jeb will have to do two things: (1) passionately articulate a reform-minded, small government agenda, and (2) forcefully refute the Obama record and the ideas behind it. His past words indicate he could be up to the tasks.

In 2003, during his second inaugural address as governor, Jeb said, “There would be no greater tribute to our maturity as a society than if we make these buildings around us empty of workers, silent monuments to a time when government played a larger role than it deserved or could adequately fill.” He should go one step further and channel Herbert Hoover, who correctly noted, “Every time the government is forced to act, we lose something in self-reliance, character and initiative.”