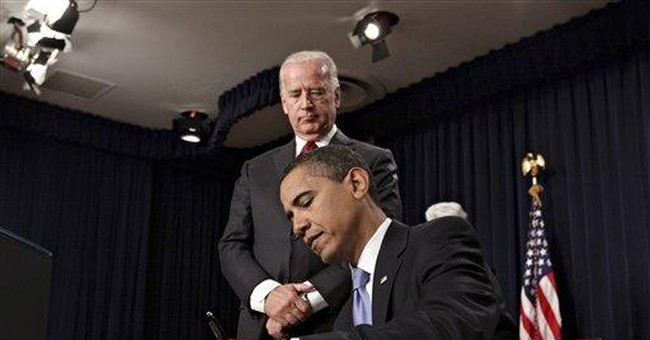 I have pledged to give President Barack Obama a fair chance, and I do not want to be that guy who criticizes everything the new President does, especially in light of the unfair treatment those on the Left showed towards former President Bush. At the same time, I cannot, in good conscience, let certain things go unanswered, especially when rhetoric so clearly contradicts reality. With that being said, am I missing something here?

After digesting our new President’s inauguration speech for a full 24 hours, I am still struck by several remarks. The first is President Obama’s call for a “new era of responsibility” and “hard-work.” I applaud and second Obama’s suggestions. However, I would query how $50 billion in foreclosure relief fosters the notion of personal responsibility. How does a stimulus package that will likely exceed $800 billion—coupled with hundreds-of-billions of dollars of additional Troubled Asset Relief Program (TARP) spending and automobile bailout funds—foster responsibility or sacrifice? How does record spending and record deficits that will leave our children with massive debt not constitute another form of “putting off unpleasant decisions” and “hard choices”?

Second, Obama tried to preempt any questions about the government’s size, saying “The question we ask today is not whether our government is too big or too small but whether it works.” In that case, the answer is no. Government has let Americans down in more ways than we can imagine, starting with its support of Fannie Mae and Freddie Mac, which helped to cause the current financial crisis. However, government is, in fact, too big, and we do ourselves no favors not to acknowledge it. There are scores of regulatory agencies that exist simply to enforce rules, and regulations cost the economy close to $1 trillion per year. The 2008 Social Security and Medicare Trustees Reports showed that the combined unfunded liability of these two programs is over $100 trillion in today’s dollars. Government is most certainly too big.

Last, in the realm of fighting terror and America’s foreign policy, Obama most memorably declared that “we reject as false the choice between our safety and our ideals.” That sentiment sounds nice in theory, but it is far too simplistic—a criticism the Left hurled constantly at George W. Bush for breaking down the world into good and evil. The reality is that George W. Bush balanced (and balanced well) our twin goals of safety and democratic ideals. It is a balance that great presidents have been forced to undertake prior to Bush.

Abraham Lincoln, who Obama holds as a historical model, declared martial law and suspended the constitutionally protected writ of habeas corpus for American citizens during the Civil War. He also defied the Supreme Court’s ruling in Ex parte Merryman, which ruled the suspension of the writ unconstitutional. Franklin D. Roosevelt, the Democratic President who many compare to Obama, also suspended the writ of habeas corpus for unlawful combatants captured in the U.S. during World War II, as well as ordered the internment of thousands of Japanese-Americans.

Obama’s inauguration was appropriately sober, yet hopeful—a tribute to the man and his power to inspire. However, hope and inspiration alone will not make America a better, stronger, more economically productive nation. Those goals will require policies that truly reflect the aspirations about which Obama speaks, including responsibility, sacrifice, hard-work, courage and freedom. I am uncertain, however, that Obama’s plans will live up to those ambitions. I only hope that Americans have the clarity to witness and judge the next several years on the merits. After all, if the Emperor is not wearing any clothes, someone needs to say so.