Brent Bozell and Tim Graham
|
Posted: Jan 19, 2018 12:01 AM
Share   Tweet
The opinions expressed by columnists are their own and do not necessarily represent the views of Townhall.com. 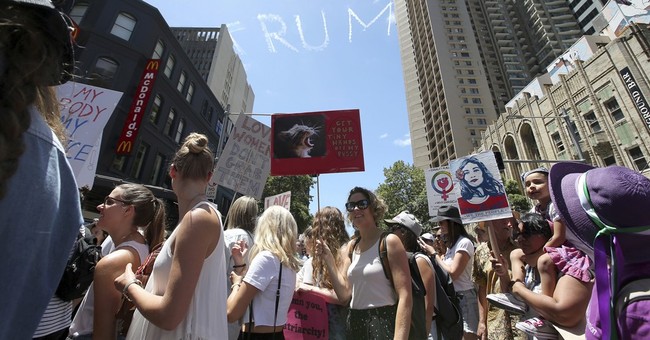 Since 1973, liberal feminists have celebrated the "right to choose abortion" without admitting the horror -- over 60 million lives have violently and prematurely ended since the Supreme Court ruled in Roe v. Wade. The liberals who champion abortion are far more comfortable panicking that abortion "rights" are always in danger, especially when Republicans control Washington.

So it's not surprising that a hot trend among novelists is feminist themes, like imagining the terror of abortions banned. Washington Post book critic Ron Charles loves a new book called "Red Clocks" by Leni Zumas. She imagines an America in which anyone who tries to get an abortion is jailed. In this book, the conservatives even build a forbidding Pink Wall along the northern border of the U.S. to keep desperate women and girls from going to Canada to exercise their lethal "right to choose."

Charles wrote: "'Red Clocks' might sound like a dystopian novel, but plenty of conservative politicians are plotting to make it a work of nonfiction. ... The story is set in a small Oregon town in a future that Mike Pence can almost see if he stands on his pew."

It would have been helpful for him to name a single conservative politician who supports that scenario, which is not just unrealistic but incoherently so.

The author says her most frightening details were drawn from "actual proposals" by men who are currently in charge of the government. Charles dramatically added that in the book, "Bridles designed for women's bodies are already hanging in legislators' barns, just waiting for Ruth Bader Ginsburg to die."

As if that didn't sound wacky enough, Charles also filmed a video in which he imposed his own face on the Statue of Liberty and recited an altered Emma Lazarus poem to match what he thinks is Vice President Mike Pence's vibe: "Give me your rich, your white,/ your huddled spermatazoa yearning to break free!"

Liberal legs are getting thrills from this exciting new line of feminist literature, and the Post has seemingly applauded every example. A year ago, Charles celebrated the latest novel by Joyce Carol Oates, "A Book of American Martyrs." The central drama involves a conservative Christian shooting an abortion doctor to death.

It's apparently inspired by the 1994 shooting of Florida abortion doctor John Britton, but the Post critic called it "a powerful reminder that fiction can be as timely as this morning's tweets but infinitely more illuminating." It's been more than eight years since the last abortion doctor was murdered (abortionist George Tiller), so it's not as "timely" as this morning.

In October, Charles championed a new novel called "The Power" by English author Naomi Alderman, which seeks to enrapture feminists by imagining that teenage girls become empowered with the ability to electrocute men with their hands. Charles especially liked that this liberating feminine "power" forced patriarchal Christians to reimagine the Gospels, and set aside the Father and the Son, and honor the "supremacy of the Mother." Charles gushed that this book was an instant anti-sexist classic that deconstructs the "internal ribs of power that we have tolerated, honored and romanticized for centuries." He admitted that it might be "a fool's errand" to assert that Alderman will be honored for all time, but "in this case," he's "eager to be that fool."

At the very least, it's an instant liberal classic -- honored as a Best Book of 2017 not just by the Post but by the Los Angeles Times, The New York Times, the San Francisco Chronicle, Entertainment Weekly, NPR and ... former President Barack Obama. Hollywood cannot be far behind.