Brent Bozell and Tim Graham
|
Posted: Jan 27, 2017 12:01 AM
Share   Tweet
The opinions expressed by columnists are their own and do not necessarily represent the views of Townhall.com. 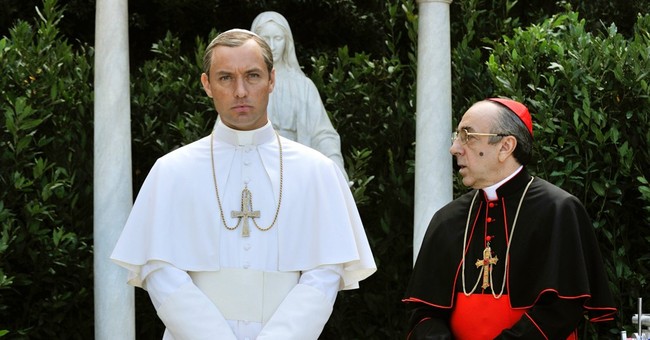 In a conversation about homosexuality a few years ago, a Catholic priest made a powerful observation. "Do you realize Heaven is full of gay saints?" he said. His point: The homosexual condition exists; the exercise is sinful. Those honoring God's law carry an especially heavy cross through life, and for that they are rewarded with paradise.

The atheist cannot separate the sinner from the sin because he doesn't acknowledge the existence of sin. What to do about those who condemn the sin but also demand that the sinner be loved? The atheist hates Christianity, and Christianity-haters have no problem purposely distorting the Church's teachings while slandering its leaders if it will advance their agenda.

Enter HBO and "The Young Pope." In the fourth episode of a ten-episode series, the implausible American pontiff Lenny Belardo, or Pope Pius XIII, proposes to Cardinal Angelo Voiello, a "reformist" prelate who wants to manipulate the eponymous young pope, that all the gay priests be drummed out of the priesthood.

The script reads like a mudslinging advertisement against the Vatican.

The cardinal protests: "It would be a war that would leave the ground littered with corpses, Holy Father. Do you want to know how many corpses would litter the ground?" The pontiff replies, "Two-thirds of the clergy." Since recent gay-activist surveys plot the LGBT segment of the adult population at 3.5 percent, that number is ludicrous. Slander is never having to say you're honest.

But the conversation continues to smear the Catholic hierarchy. The cardinal protests, "Then what becomes of mother church's capacity for forgiveness?" Pope Pius shoots back: "With our abuse of forgiveness, we've become a laughingstock, Your Eminence. As unreliable as some miserable little third-world country." That insult clearly wasn't good enough for the scriptwriter, since the cardinal replies in kind, saying, "With your methods, on the other hand, we are likely to become as reliable as, say, North Korea."

So, take your pick. In HBO's opinion, the world's largest church is either a "miserable little third-world country" or North Korea, which is pretty much the same thing, the latter with a heavy layer of Marxist totalitarianism.

This malignant "Holy Father" doesn't recognize any rules. There's really nothing Catholic about him. In the first episode, when he goes ostensibly to confess his sins to a priest, he demands that the priest tell him the sins of other confessors, which is a confidence, or seal, priests are not supposed to violate. Then, still during confession, he asserts to God: "I do not believe in you. I don't believe you're capable of saving me from myself." When the priest expresses grave concern over this tidbit, he clarifies, "I'm saying I don't believe in God." Then he insists, "I was joking."

Vulture raved that comic book-makers should see this young pope as a model supervillain, as a "sadistically illiberal Batman." Even liberal critics see this pope as a "borderline anti-Christ." He's a powerful threat to everything Christlike in the Church.

The timing for this Vatican drone attack seems a little bizarre, considering how Pope Francis has been persistently pleasing to the left on environmental and economic issues. All this is such an outlandish caricature that HBO might as well just dress Bill Maher in papal vestments and be done with it. It couldn't be any more venomous than this claptrap.