Brent Bozell and Tim Graham
|
Posted: Oct 07, 2016 12:01 AM
Share   Tweet
The opinions expressed by columnists are their own and do not necessarily represent the views of Townhall.com. 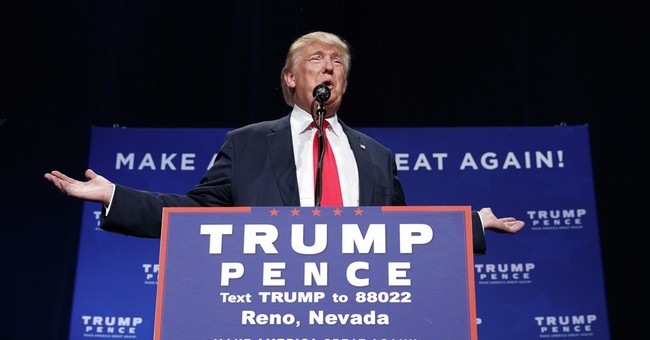 Staff Sgt. Chad Robichaux is a Marine who developed post-traumatic stress disorder in the aftermath of eight tours in Afghanistan. After years of suffering, he now runs a counseling program dedicated to helping veterans avoid suicide, divorce and other attendant problems. He knows from his own experience that a faith-based approach works. Our government -- allergic to faith-based programs -- isn't really interested, especially under President Barack Obama.

So when Donald Trump came to a meeting of the Retired American Warriors PAC on Oct. 3, Robichaux asked a question: "Spiritual fitness works on these types of problems. The government is not taking advantage of these programs and services. So my question for you is, when you become president, will you support and fund a more holistic approach to solve the problems and issues of veteran suicide, PTSD, TBI and other related military mental and behavioral health issues?"

Trump said yes: "When people come back from war and combat and they see things that maybe a lot of the folks in this room have seen many times over, and you're strong, and you can handle it. But a lot of people can't handle it. And they see horror stories. They see events that you couldn't see in a movie, nobody would believe it."

Was that a marble-mouthed answer? Of course -- it's Trump. Could an observer covering Trump conclude that he was criticizing our veterans who "can't handle it"? Of course -- if you want to savage Trump.

What Trump said next was skipped over. Regarding a statistic of veteran suicides, he said: "So we're going to have a very, very robust, level of performance having to do with mental health. We are losing so many great people that can be taken care of if they have proper care. You know, when you hear the 22 suicides a day it's a big part of your question. But when you hear the 22 suicides a day, that should never be."

His sympathy for the plight of veterans was clear, but it made no difference. The snide headlines were already written. The leftist website Buzzfeed sneered, "Trump Suggests That Soldiers With PTSD Aren't 'Strong.'" And The Daily Beast doozy was, "Draft-Dodger Donald Trump Implies PTSD Sufferers Are Weak." CNN's and NBC's websites also mangled the quote.

Were this the case, the veteran to whom the answer was directed would certainly be deeply offended. But afterward, Robichaux was so upset with the press that he issued a statement, saying: "I think it's sickening that anyone would twist Mr. Trump's comments to me in order to pursue a political agenda. I took his comments to be thoughtful and understanding of the struggles many veterans have, and I believe he is committed to helping them."

So what? Democrats pressed ahead. On the stump, Hillary Clinton claimed that Trump's remarks are "not just ignorant, they're harmful." Vice President Joe Biden went on CNN and asked: "How can he be so out of touch? He's not a bad guy. But how can he be so out of touch and ask to lead this country? ... This is an ignorant man. This guy says things he has no idea about. He's not a bad man. But his ignorance is so profound, so profound."

After the ongoing scandals dealing with the wretched state of health care by the Department of Veterans Affairs under Obama-Biden, you'd think it would take more than a little chutzpah for Democrats to claim that any Republican is "out of touch" with the needs of veterans, and for their allies in the press to give them the oxygen they need. But as the Geico slogan goes, it's what you do.