Brent Bozell and Tim Graham
|
Posted: Aug 05, 2016 12:01 AM
Share   Tweet
The opinions expressed by columnists are their own and do not necessarily represent the views of Townhall.com. 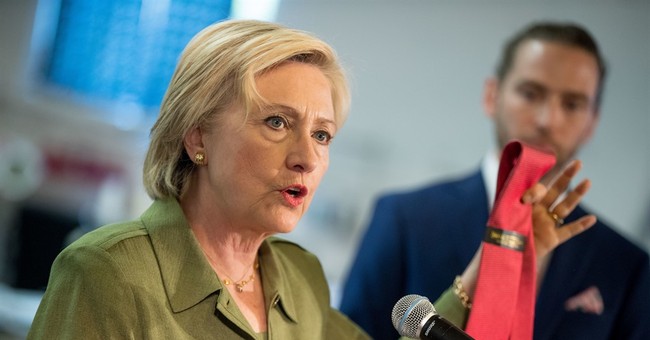 Trending
Sex-crazed radio shock jock Howard Stern has an impossible new fantasy that he can't keep to himself: He wants an in-depth interview with Hillary Clinton.

Stern, who left broadcast radio for satellite radio so he could be as raunchy as possible and make his millions dwelling on the lowest common denominator for the demographic, men ages 18 to 34, has a less-than-zero chance of scoring a Clinton interview. The risk-averse woman, who hasn't held a press conference yet in 2016, isn't going to upset all her feminist supporters to please Stern.

If any Clinton adviser wanted to suggest to her that it could be a great opportunity to address the gender gap, one can easily look at what accomplished women discuss on his show. Take a Newsmax headline from a year ago that read, "Megyn Kelly Talks with Howard Stern: Breasts, Penises, Sex." Those are the lifelong obsessions of Stern (and his audience).

It was an act of media trolling for The Washington Post's Geoff Edgers to help Stern make his sales pitch to Clinton. Edgers insisted Stern's show is "simply the best broadcast entertainment interview show around."

Stern gave the Post an hour-long interview, but somehow Edgers didn't ask why an aspirant of the highest office in the land should lower herself to an interview with a guy who played fictional superhero Fartman and sold videotapes called "Butt Bongo Fiesta."

For his part, Stern promised he would not ask Clinton about the email scandal (or scandals). But he would have to ask about her husband's adultery, presumably because it's more important. That said, Stern "(doesn't) think it's necessarily the central thing." He'd like that subject to evolve, but he wouldn't ask about it directly, because "That's just poor form, and that's not the way I approach a conversation in my home."

Stern defines "poor form." The Post didn't recall the low points in Stern's career. He made sex jokes about the Columbine High School massacre. He mocked the Latin pop star Selena right after she was shot dead. The hits go on and on. Yet, Stern is somehow the Indiana Jones of journalism. Edgers asked: "You've had Steve Martin on, Bill Murray, McCartney, almost everyone. Is Hillary the Holy Grail at this point?" Stern (at least) said, "I wouldn't say that," but promised he would be "fascinated by Hillary Clinton."

Edgers then remarked, "I'd want to hear what it was like being so accomplished and so skilled and then basically deciding, hey, Bill, I'll become a mother and let you do it." Stern replied that it was like an actor turning down a role in a movie that becomes a smash hit. Thus, Bill Clinton's presidency is somehow a blockbuster movie. Edgers responded, complaining that Clinton was an intellectual who ended up "getting grilled about some offhand comment about baking cookies." That "grilling" never happened.

Speaking of grilling, Edgers asked Stern to condemn his friend Donald Trump, saying: "You're obviously a big believer in free speech. He's been blocking the press and trying to control the press and trying to shut the press out. I can't imagine you support that." The Post couldn't acknowledge that while Trump pulled its press credentials, Clinton has awarded it a tiny 10-minute interview during her entire presidential campaign, even though she has refused a press conference since last year, and her campaign manager won't commit to one through the duration of the campaign.

But it's Trump who is blocking the press.

Stern didn't answer that complaint. He's not going to criticize his pal. He only wanted Clinton's media allies to ignore his very sordid, crotch-obsessed career and honor him for producing "simply the best broadcast entertainment interview show around." On that score he succeeded. But he won't land Hillary Clinton.

How Did This Ever Get Published? NYT Video Takes a Blowtorch to Blue States
Townhall
Trouble in Socialist-Ville? David Hogg tweets entire thread SHAMING progressives for their lack of self-awareness and ROFL
Twitchy
CNN Analyst Has 'No Idea' What's Behind 'Smash and Grab' Robberies — Then Gives up the Answer
Redstate
Whose Land Did Native Americans Steal Before Europeans Stole It From Them?
PJ Media