Brent Bozell and Tim Graham
|
Posted: Apr 20, 2016 12:01 AM
Share   Tweet
The opinions expressed by columnists are their own and do not necessarily represent the views of Townhall.com. 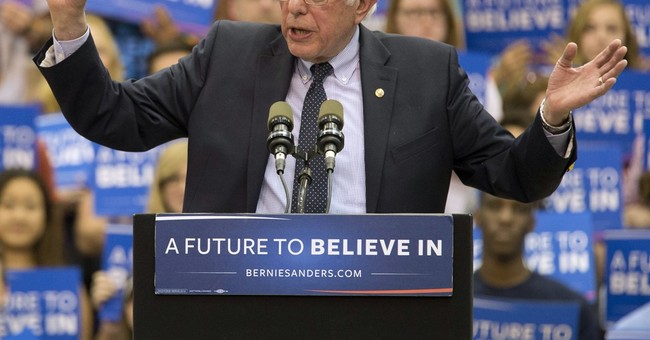 If conventional wisdom ruled in this election cycle thus far, America's most prominent journalists would have painted the traditional portrait of the candidates. They would show Hillary Clinton and the Democrats warmly reminding the country of her husband's allegedly centrist presidency. Whoever the Republicans nominated would either be declared by the media as too conservative to win, or be utterly ruined by trying to placate those crazy tea party people who inevitably make the moderates unelectable.

But Clinton's long and frustrating march to put away her socialist competitor Bernie Sanders has disrupted the narrative. She cannot package herself as centrist. The media elite will admit Sanders has dragged her to the left. But that doesn't mean her increasing leftism could damage the Democratic Party with independent voters.

"There's the race for delegates, which Bernie Sanders is losing and Hillary is winning and almost certainly will win," Scherer said. "But there's this other race between them about how far left he could push her. And every time she moved a little bit, he seemed to celebrate and get the crowd going and say, 'Look, see, I did that, she said $15 an hour minimum wage instead of 12' ... It's not that she wouldn't be happy if (this) came true but, you know, she's created a very modulated campaign so far."

Actually, that's contradictory on its face. She wanted  to create a very modulated campaign, but has capitulated instead, and not just on economic issues. The Clintons have been dragged away from Bill Clinton's crime bill and welfare reform in the wake of the onslaught of the Black Lives Matter movement.

On the same PBS show, New York Times political correspondent Jonathan Martin implied that bowing to the radical left is simply acknowledging reality: "It's a reflection of today's Democratic Party that that's what she has to get to. She doesn't have a choice in the matter. She has got to accommodate a party that is very different today than it was when Bill Clinton ran, you know, in '92."

Liberal reporters like Sanders' influence on Clinton. They equate socialism with the conscience of the country. His candidacy is welcome because it's pushing her toward the radical positioning they favor.

This is why Sanders has out-performed Clinton when pitted against the Republican candidates in head-to-head polls. Because he's still perceived by some as having little chance of winning the nomination, no one is really bothering to hammer him for being extreme, and not much focus has been put on the nagging hypocrisy that he's a millionaire with two homes and donated only 4 percent of his income to charity.

They've loved Sanders from the start. In February 2015, ABC's David Wright gushed that Sanders is "as unabashedly progressive as Ben & Jerry's. ... Sanders rails against the corrupting influence of money in politics. He stands for economic justice. ... He's not just for raising the minimum wage, he wants to double it."

If forced to describe someone who as staunchly on the right as Sanders is on the left, ABC probably wouldn't sound delighted. They would need a motion sickness bag to get through it. The media's location on the ideological spectrum is so close to Ben and Jerry's you can almost taste the Cherry Garcia. Never trust it to tell the public who's the extremist and who is not.