Scott Walker and the Other Dummies 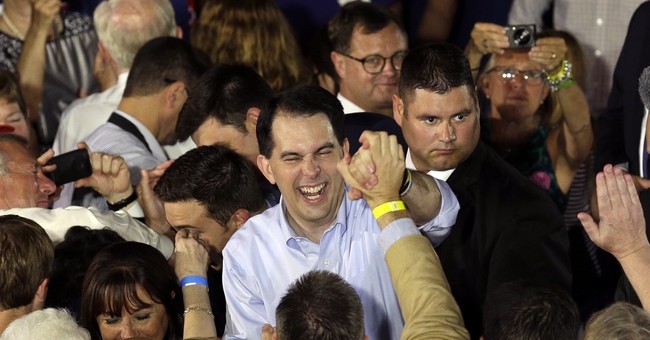 On the day Scott Walker would announce in Wisconsin that he was running for president, The New York Times offered a typical takedown on the front page. "Admiring voters" found him to be authentic and approachable, but there were two words these fans apparently did not use: "Smart" and "sophisticated."

That might be because liberal snobs at the Times think that those words are defined by how liberal you are. Those are qualities you get from reading the Times. Their own ads have touted them for giving the customer "depth" and "breadth" and "insights." Conservatives are dumb, but they have hope if they put enough of The New York Times into their brain every day.

Times reporter Patrick Healy focused on how Walker needed "several months of policy tutorials" to be ready to run for president, which reminded the Times of the crash course in foreign policy the McCain campaign forced on Sarah Palin. They suggested Walker may not be "big enough to be president."

This is a very old line of attack from the liberal media. Look at the way they treated Reagan and George W. Bush and Palin and now Trump. To be conservative is to lack intelligence, to need tutoring.

So in 2007, when Sen. Barack Obama was running for president, did he need "tutorials" on policy? When you search the Times to see how they used the words "Obama" and "tutorial" together, it produces one story: Jodi Kantor oozing through the pages of Obama's memoir "Dreams From My Father" on how the game of basketball helped Obama find "a tutorial on race, a way for a kid with a white mother, a Kenyan father and a peripatetic childhood to establish the African-American identity that he longed for."

So Obama was such a "sophisticated" deep thinker that he had to play basketball to discover he was a black man?

Eight years ago, liberal journalists were so infatuated with the narrative of Obama's memoir and candidacy -- biracial and struggling with identity, citizen of the world with an immersion in Islamic culture, Harvard Law Review editor with a Saul Alinsky education in community organizing the Chicago slums -- that they never questioned the memoir, like it was biblical. But it was full of lies. These "sophisticates" were easily bamboozled.

In 2012, Washington Post editor David Maraniss -- no conservative he -- investigated the memoir's claims and discovered it collapsed like a house of cards. It was a fiction book. Even then, the Post never put a word of that in the paper. The newspaper only excerpted Maraniss recounting ... Obama's childhood love of basketball.

If the Republicans are truly smart, what they will do is run against the Times. Newt Gingrich energized voters and won the South Carolina primary by pushing back the major media, especially the liberal-journalist "moderators" that the Republican Party allowed in the primaries last time around.

When the Old Media try to delegitimize conservatives, the answer is to delegitimize the Old Media. Nobody should believe that today's "news" media are in the slightest way objective. Seventy percent of Americans now tell pollsters they're not referees interested in fairness. It should be 100 percent. The press is not just biased; it is intentionally biased. The evidence of a tilt toward liberalism is not just never-ending; it is also accelerating in intensity.

The 2016 character assassination campaign is underway.