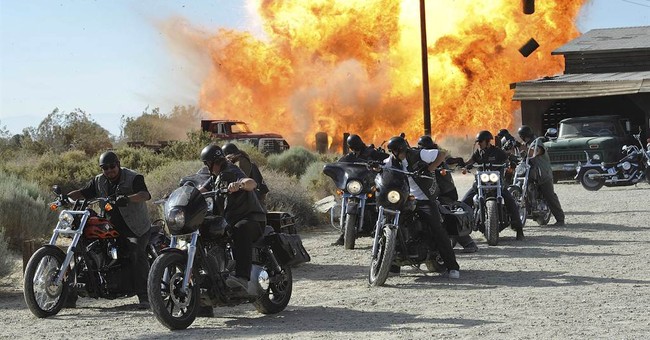 The year is winding down with some good TV news: The amoral biker-gang drama "Sons of Anarchy" has ended its seven-year run on the cable channel FX, after a final season drenched in pointless sex and violence. Jax, the leader of the gang, shot a bunch of his enemies dead and then drove his motorcycle straight into the oncoming grill of a semi truck.

The show wound down into a relentless deathfest. Jax shot his mother dead, because she stabbed his wife in the neck with a barbecue fork. Most of the cast was slaughtered. And for what? It all seemed like a long slog of sensationalism for its own sake.

The Nov. 11 episode opened with an unbelievably graphic sex scene lasting a full two and a half minutes, depicting seven different couples. Adam Buckman at Media Post reported "this montage featured five heterosexual couples, and two homosexual -- one of which featured the transgender character ... and the other one featuring a jailhouse rape being simulated by guest-star Marilyn Manson."

Producer Paris Barclay explained that on the set, they called it the "f---tage." In an interview, Yahoo's Kimberly Potts told Barclay the transgender sex scene was "the most honest relationship moment in the whole series." Barclay described the awe and wonder of it all.

"When we did the first read-through, everyone responded in such a hushed and reverent manner to just the reading of it, just the lines. ... We knew that we had something great," Barclay declared. When they filmed the scene, "the entire crew applauded for at least two minutes. I mean, literally, with tears in our eyes. Everyone. I'm sitting there watching them applaud, in the middle of 'Sons of Anarchy,' a love scene which involves probably the most degenerate club member, the necrophiliac ... and this transgendered woman who really, for the first time, explains where she came from emotionally and what it's about."

Welcome to Hollywood, where the weirder it gets, the more people cry on the set about the "honesty."

Once the sex and the tears were over, the plot veered back into senseless violence. The show's primary antihero, Jax the gang leader, ripped out a man's eyeball with his bare hands. The eyeball was shown dangling from the socket, blood erupting from the wound, as other gang members kicked and beat the victim. Someone hacked off the victim's fingers with a knife, as the victim screamed in pain. A close-up displayed the severed fingers in a pool of blood. Jax then shot the man point-blank in the head.

It's a given that some in this industry will believe the finale proved a moral point, that the murderous gang leaders all arrived at punishment for their sins, making "Anarchy" creator Kurt Sutter a moralist. It's quite the opposite. The whole point of the show was vicariously enjoying the sadism, the sexual calisthenics, even the school shooting that opened season six -- and since that wasn't enough, Sutter included two rapes and a man drowning in a bathtub of urine.

Sadly, brain-damaged TV critics compare Sutter to Shakespeare, which should have the Bard spinning like a top in his grave. Our "tastemakers" repeatedly adore savage antiheroes and demonstrate a boundless appetite for the grotesque.