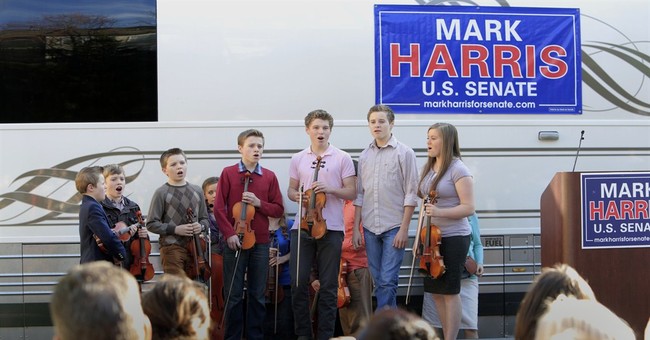 While so much of reality television dwells on catty "Real Housewives" and Snooki-style party-hearty debauchery, it's interesting to note that a small fraction of this ever-expanding genre is celebrating evangelical Christianity and values like chastity.

This drives the libertines crazy. Washington Post TV critic Hank Stuever recently raged on the Internet against the Duggar family of TLC's "19 Kids & Counting" and how they are no more worthy of attention than the Kardashians. Their children are denied "freedom of choice."

"My thoughts on the Duggars are few and far between because I think the show treats its viewers like they're learning-disabled," he wrote. Then he doubled down. "The viewers, not the Duggars. Although ... "

Leftists, especially openly gay writers like Stuever, itch for the children to rebel against that old-time religion. "I guess we just sit and wait and hope that there's a contrarian in the bunch who gets the itch to write a tell-all at some point down the road. I'd be surprised if anyone seriously watches the Duggar show out of a place of envy."

It is the right of a TV critic to knock the Duggar show as too sweet and happy and prim for his snarky tastes. But how do those critics react when you knock a show <i> they </i> like? "If you don't like it, turn the channel!" Let's face it, the Duggar family isn't broken by divorce or addiction or other social maladies. That is why the critics are turned off.

On the other hand, the celebrity magazines have found these popular Christian reality shows to be worthy of cover stories. The latest Us Weekly forwards "Duck Dynasty" teenager Sadie Robertson's decision to forego premarital sex. A recent edition of People magazine reported on newly married Jill Duggar and the family's "Extreme Courtship Rules." Those principles are a direct challenge to today's hookup culture, and that's what makes magazine readers so curious about them.

It naturally follows that loutish "sex columnist" Dan Savage would get in his insults at these "professional virgins." The conservative blog site Twitchy took exception to his wisecracking on Twitter that the Duggar daughters should observe his mating rules, including his notion of "F--- First." Savage thinks people should be sexually compatible before marriage, so chastity is a terrible idea. In fact, he despises virginity and its advocates. His rules also include cheating, which is "inevitable" in his mind.

After Twitchy spurred the conservative Twitterati to attack him, Savage then responded with a 2,500-word attack on the Duggar worldview. Like Stuever, it begins with the notion that Christians are an organized "hate group." Their oldest son Josh now works for the Family Research Council, which validates their charge, they would tell you.

Savage argues that if the Duggars were Muslims and Josh worked for the Council on American-Islamic Relations, conservatives would never embrace them. "But the right wing doesn't have a problem with the Duggars: They're the right color, they worship the right God, and they want to impose the right brand of theocracy."

Savage, like Stuever, wishes these robot-children would grow up to reject their freakish parents: "I have hopes for all the unmarried little Duggars still being pimped on television and dragged to campaign rallies: I hope they all get out from under the thumbs of their crazy, controlling, virginity-obsessed parents."

Leftists better hope their "best wishes" for rebellion are never turned on them. Would it seem kind for conservatives to wish that Dan Savage's adopted son should write a "tell-all book" about growing up having to hear all about his "father's" extreme sex rules and obsessions? It would seem unkind, intolerant and smug --S all adjectives that apply to the Duggar bashers.