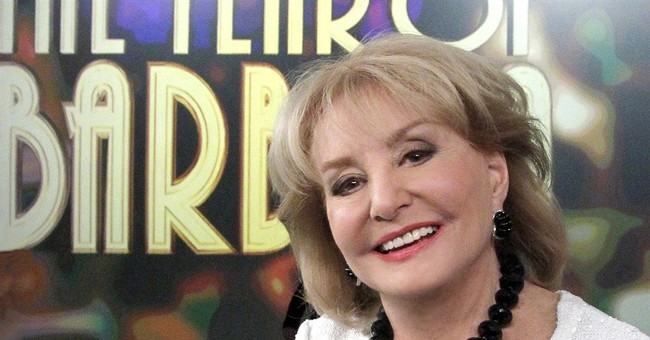 You can always tell when a network legend is retiring. His/her network blocks out most of a Friday night so they can remember all of the legend's glory days. At 84, ABC's Barbara Walters is taking a bow, and she's certainly as synonymous with television as Johnny Carson or Walter Cronkite.

Walters was a pioneer for female journalists on TV. She's also an archetype for our liberal feminist media. In recent years, she's competitively elbowed out other contenders in providing leading Democrats with the most comfortable of softball interviews.

A holiday tradition at the Obama White House is a visit from Walters, who stays as sweet as pumpkin pie.

From 2012: "Mr. President, Mrs. Obama. There is a photograph of you (hugging) that went viral, became the most shared photograph in the history of Twitter. How do you keep the fire going?"

From 2011: "I know that you answer people's letters all the time. And what we thought that we might do. We asked middle school and high school students to throw a few questions. I'd like to read their questions. 'If you were a superhero and you could have one superpower, what would it be?'"

Walters promised these "news" revelations in 2010: "When we come back, we'll hear about family life in the White House, just who slept through the midterm elections, the importance of SpongeBob SquarePants and the night the Tooth Fairy didn't show up. Stay with us."

Soon after the 2008 election, in her first Barack Obama special, Walters explicitly compared the Obamas to the Camelot swoon over Jack and Jackie Kennedy, and their "youthful embodiment of style, substance and hope." She went all over ABC praising them.

On "Nightline," she said "When you see him with his wife Michelle, he is so relaxed, he is funny. I have rarely seen a couple as devoted, as together, whether they're talking about their children or the kind of dog they're going to get ... They tease each other, but the respect that they have for each other is enormous."

The disastrous rollout of Obamacare eventually caused Walters to lament on CNN: "We thought that he was going to be -- I shouldn't say this at Christmastime, but -- the next Messiah."

Another legendary softball-fest was the two-hour Sunday night primetime special promoting Hillary Clinton's first memoir "Living History" in 2003. Walters wondered how she could work with Republicans after that impeachment thing: "I mean, no hard feelings, no remnants? Are you a saint?" She sighed, "I can barely remember a week went by when one of you wasn't being criticized and investigated." St. Hillary also drew this softball about the Monica Lewinsky mess: "I don't think people realize how strong your faith is. It goes all through the book. It must have helped you then."

Walters is so smitten by the Clintons she used their marriage as encouragement to Anthony Weiner: "And we had a president named Bill Clinton who went through a great deal of trouble, weathered the storm and is now not only respected, but he's beloved by many people, with a very good marriage."

This treatment is extended to liberals alone. Sarah Palin? Walters told her in 2010 people find her "a little scary," suggesting "You hear, 'She's very charming, but she's uninformed.' What are they afraid of?" Walters hounded the Bushes in 2001 that incoming Attorney General John Ashcroft was a lighting rod: "He openly opposes abortion. But he's going to have to be the one to protect the abortion clinics. He's not considered a friend to civil rights. He's been against court-ordered desegregation."

Walters is an icon to her peers, perhaps because she's advocated for leftist ideologues more aggressively than anyone else.