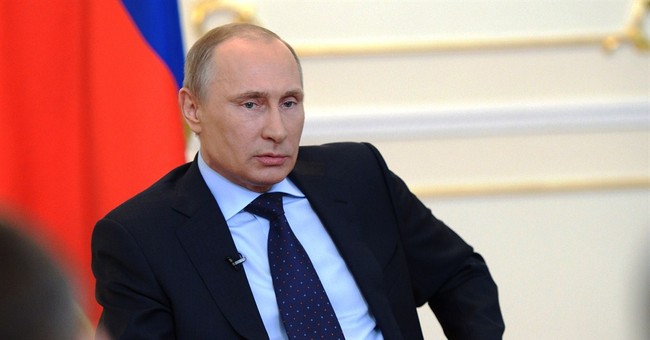 After Russia invaded Ukraine, demonstrating how Vladimir Putin has zero fear of President Barack Obama, Fox News anchor Bret Baier reran a snippet from the third presidential debate in 2012, showing who felt Russia was a geopolitical threat, and who thought that sounded silly.

Obama mocked Mitt Romney for being concerned about Russia. "When you were asked, 'What's the biggest geopolitical threat facing America?' you said Russia. Not al-Qaida. You said Russia, and the 1980s are now calling to ask for their foreign policy back because, you know, the Cold War has been over for 20 years."

A clever quip from the man whose foreign policy is a joke.

In March of 2012, Obama had been caught on an open mic telling then-Russian leader Dmitry Medvedev that he needed "space" to sound adversarial, but not to worry. "After my election, I have more flexibility," he'd stated, demonstrating yet again he knows nothing about diplomacy beyond bowing to dictators.

At the time, however, this exchange was barely noticed on the networks. Russia wasn't a hot spot. Only "CBS This Morning" ran clips of both sides of that argument. NBC ran a clip of Romney the night after the debate, and ABC never located either statement. NPR ran a long, loving sound bite of Obama's quip, adding his attack that Romney was also stuck in the 1950s on social issues, and in the 1920s on the economy.

Unsurprisingly, MSNBC's Chris Matthews picked right up where Obama left off on the stuck-in-the-past ridicule. "I don't know what decade this guy is living. It sounds like '72, '52 even. It's not even Stalin over there. It's not Khrushchev. It's not Brezhnev. It's Medvedev," he proclaimed. "It's another country in the world. It's no longer the Soviet Union. Is he trying to play Ronald Reagan here or what?"

His liberal guest, Cynthia Tucker, stepped up the attack: "This is Mitt Romney's severely conservative problem. He struggles so hard to be persuasive, to make a case against Obama, that he always ends up jumping sharks, saying something that is completely off key and not credible." She even said, "It made Romney look dumb. He's not a dumb man. But he said something that was clearly dumb."

Noah Rothman at Mediaite added that when Romney made his original anti-Russia comments in September 2012, MSNBC's Rachel Maddow trashed him as a lightweight on her blog. "The problem is the former governor just doesn't have any real policy chops in this area. He's out of his depth, and struggles when the subject takes center stage. It's not just that Romney is uninformed; it's that he hasn't figured out how to fake it."

Leftists like Maddow pine for the opportunity to proclaim conservatives are on the "wrong side of history." But the left was completely on the wrong side of evaluating the Cold War. They're still looking dumb for promoting Obama as he boasted that he had punched a "reset button" of warm cooperation with Russia in 2009.

There are still bad actors in the world who openly spit in the face of those seeking democracy and peace. But Team Obama and their media repeaters want to insist someone (SET ITAL) else (END ITAL) is naive and stuck in the past. Obama looks every bit as naive as the thoroughly befuddled Jimmy Carter in 1979 after the Soviet invasion of Afghanistan.

So, will those journalists who denounced Romney now come forward and acknowledge they were wrong? Will they admit they possibly can't find the Ukraine on a map?