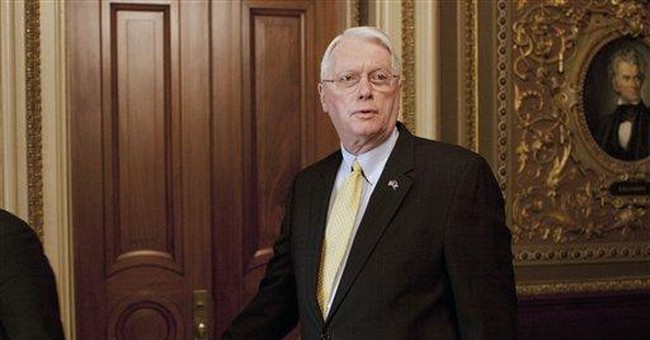 So much for all that fiscal sanity blather from Team Obama in '08. How dishonest. Even worse, there's a good reason to stay pessimistic about deficits as far as the eye can see. It's called the "news" media.

Exhibit A is Sen. Jim Bunning, a man who is not seeking re-election, which is obvious from his brash, outside-the-Beltway behavior. Bunning pushed the stop button on the perpetual federal spending machine by holding up a $10 billion package to extend (yet again) unemployment benefits and keep cash flowing to the highway trust fund. Mirabile dictu, he insisted that the Congress should find the money to pay for this -- for example, in unspent "stimulus" money -- instead of just adding another multibillion-dollar layer to the deficit lasagna.

Break out the smelling salts. The network nightly news crews tried to manufacture instant outrage, earning their reputation as the enablers of incessant and unrestrained deficit-building.

ABC's Diane Sawyer sent her reporter to expose this mean old man: "One man's stand. A single Senator stops the whole Congress, denying thousands of people unemployment benefits. We confront him to ask why." No spin there. Sawyer framed it as Bunning simply blocking "life support for the unemployed," as if he were standing on someone's oxygen hose.

ABC reporter Jon Karl and his producer physically blocked Bunning's elevator while playing victim's advocate against this alleged victimizer: "We wanted to ask the Senator why he is blocking a vote that would extend unemployment benefits to more than 340,000 Americans, including Brenda Wood, a teacher in Austin, Texas who has been out of work for two years."

Wood lamented her plight: "I've done a lot without and drained my savings, so pretty much my daughter's been helping out, so -- I don't know what I'll do." Karl added numbers on screen: "Bunning is also blocking money for highway construction. So across the country today, 41 construction projects ground to a halt, thousands of workers furloughed without pay."

On CBS, Katie Couric blamed Bunning for "one of the stranger episodes on Capitol Hill" before reporter Nancy Cordes warned: "Because the bill didn't pass by today, 2,000 federal transportation workers had to be furloughed without pay, 400,000 Americans risk losing their unemployment benefits over the next seven to ten days."

NBC anchor Brian Williams decried how Bunning "had angry words with and an obscene gesture for a reporter on Capitol Hill. A sign, perhaps, that public pressure on him is building over his controversial decision to block a short-term spending bill in the U.S. Senate." Reporter Kelly O'Donnell added the same numbers about the transportation furloughs and delayed unemployment checks.

Bunning was right to say if the Congress can't find any place in the federal budget to trim away a measly $10 billion, they won't stop spending anywhere. But the media on this story aren't really on the side of the taxpayers (and debt payers). They're on the side of Team Obama and the debt builders.

Here's what Bunning should have said to Karl and his pushy producer: "If you want to pressure someone who's savagely causing unemployment, why don't you go break into your own boss's offices?" ABC News plans to offer buyouts (and then layoffs) of 400 Americans. Does anyone point a microphone in ABC News President David Westin's face and ask him why he's cutting off "life support"?

CBS is laying off about 100 people as they still pay Katie Couric $14 million annually. Why don't some reporters break into Couric's next public appearance and ask her why she's so heartless, not trying to "save or create" a few jobs inside CBS? Would Brian Williams publicly shame her if she brushed that off with a "no comment" or an obscene gesture?

Bunning isn't proposing job cuts -- or even spending cuts. He's using a hold and demanding that legislators of both parties put up or shut up when they declare they're for "pay as you go" budgeting. When it comes to massive deficits, the media are useless as part of a solution. They are a very loud and propagandistic part of the problem.