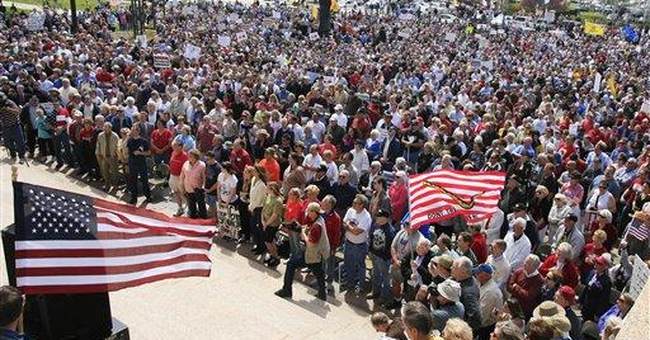 It was only a year ago that liberal elites in Washington were shoveling dirt on conservatism. James Carville was writing boastful books about 40 years of Democrat dominance, boasting in his typical way that he could call "time of death" on the Republican Party. Liberals believed their hype that Barack Obama would be that black FDR they pictured on the cover of Time magazine.

Now newspaper headlines read otherwise: "Where did the hope for Obama go?" The hot-air balloon has crashed to Earth, and you can tell conservatism is back with a swagger. You can tell because the media's daily output has gone from breathless valentines for Obama to angry denunciations of Tea Party protesters.

MSNBC's Chris Matthews was apoplectic about this conservative uprising. "What's going on out there in the Republican Party is kind of a frightening, almost Cambodia re-education camp going" where "if you're not far-right, you're not right enough." It didn't seem to matter to Matthews that millions of people were executed in those communist Cambodian "re-education camps." His desire to demonize far outstripped any desire to treat conservatism with respect.

Outside of Matthews' rubber room, the irony here is that conservatism alone has not stopped the Obama juggernaut. Democrats had the power in sheer numbers to ram through a socialist agenda. They quickly pushed through a massive "stimulus" bill costing more than $800 billion. The TARP program doubled that bill. Obama basically took over GM and Chrysler. And the media still screamed when anyone called this "socialist."

But the momentum really shifted at year's end. The Climategate revelations of politicized science ruined Obama's appearance at the Copenhagen global-warming summit. Then when all attention returned to health care, Obama placed all his political marbles there and lost again. Even Democrats started realizing Team Obama was not ready for primetime.

As often happens in Washington, the Democratic majority turned out to be not entirely doctrinaire. There were enough moderate Democrats on one side and die-hard leftist nationalizers on the other to frustrate any health care "solution" from emerging to final passage. One could taunt liberals with a series of film clips of how they promised to have a bill on the president's desk by August, by Thanksgiving, by Christmas, and so on.

This reality is causing media liberals to try and explain away victories like Scott Brown's earth-shaking win of the "Ted Kennedy seat" in Massachusetts. Newsweek editor Jon Meacham was spreading Obama strategist David Axelrod's spin that the president's attempts to herd the Democrat cats to achieve major liberal victories like health "reform" had "the effect of making us look tolerant of, if not complicit in, the system we came to change."

But Meacham was quick to assert that conservative protesters are probably not all that idealistic and consistent, either. "An angry tea-partying farmer is probably in favor of agricultural subsidies, and it is safe to say that many of the older conventioneers in Nashville do not think of Medicare as 'socialized medicine' or of Social Security as 'big government.'"

Even if that liberal needling were true -- that conservatives are perpetually insincere -- what's under discussion in Washington is not the established government apparatus, but an entirely new one. Even if you're satisfied with the old entitlements, it doesn't mean you can't object to additional ones.

Now that liberals are losing, they want to go to the midterm elections claiming that 10-percent unemployment and massive deficits as far as the eye can see are a bipartisan product -- not the result of liberal dominance in Washington. Meacham is twisting history, demanding that the tea-party protesters realize that the "ethos of the Founding is also about give-and-take, compromise, and ultimate unity of purpose."

Is that what the British found at the Boston Tea Party? Compromise?

Meacham also praised Obama's call for civility at the National Prayer Breakfast, as if civility is what the liberal media offer to conservatives every day. Just watch MSNBC if you believe that. I don't think Meacham can claim "civility" inspired his decision to put Sarah Palin in running shorts on his magazine's cover with the words "She's Bad News For The GOP, And For Everybody Else, Too."

But what is liberal civility? At the prayer breakfast, Obama praised preachers who were working for amnesty for illegal immigrants and evangelists who were fighting the menace of global warming. "Stretching out of our dogmas, our prescribed roles along the political spectrum, that can help us regain a sense of civility."

Conservatism is back, with a swagger. It is no time for a "stretching out of our dogmas." It is time to fight harder to make James Carville's boasts look sillier and sillier.