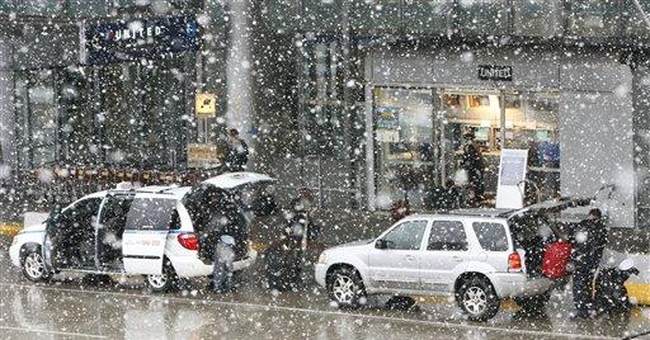 Inside the studios of talk radio and cable news, the hot talk about a "war on Christmas" has cooled somewhat in 2009. But the controversies over Christmas, which seem as eternal as religion itself, continue on a number of different levels.

There's the schoolhouse war over politeness to religious minorities -- and even more unnecessarily, the altogether non-religious. This is the kind where many parents sit through inane "winter" chorus concerts at both public and private schools where there are more songs about sleds and skis than about herald angels and newborn kings. In some cases, students even salute the holidays of religious minorities (including the recently invented Kwanzaa) while excluding any mention of Christmas.

At my son's "holiday" middle-school party, students performed skits from "Star Wars" and "West Side Story" and there was even a tribute to Michael Jackson. Not one popular Christmas carol was sung all night. (Their version of a "Silent Night," come to think of it.)

Then there's the shopping-mall war over commercial priorities. There's the same layer of political correctness as the schools. The best example of business P.C. this year was an ad for The Gap, where a group of fashionably dressed young adults and children danced and yelled, "Go Christmas! Go Hanukkah! Go Kwanzaa! Go Solstice!" They somehow skipped over the five-day December festival of Pancha Ganapati for the Hindus. How insensitive.

Minneapolis-based Best Buy caused a furor with a Black Friday circular that wished Muslims a "Happy Eid Al-Adha," which takes place at the end of November. There is one major market constituency that can now rest easily! Christmas? It wasn't mentioned in that circular, never mind that Black Friday launches the Chr------ season.

But there's another layer of Christmas exploitation -- tasteless ads mocking the Nativity story (Red Bull ads in 2006) or mocking Santa Claus. Boost Mobile drew brickbats for a bizarre animated ad where Mrs. Claus is in her bed cheating on Santa with Frosty the Snowman. Mrs. Claus says to the camera: "What, you think this is wrong? Santa's busy, and I have needs. I'll tell you what's wrong: cell phone plans with contracts that cost a fortune. That's why I got Boost Mobile. Their monthly unlimited plan has no contracts, and it's only $50 a month." Santa then returns home, and Mrs. Claus starts to melt Frosty with her blow dryer.

The words "war on Christmas" best match when the real Christmas-haters go on television during the Christmas season with the intent to ridicule Christianity to the core. Somehow, Bill O'Reilly can scowl at the ACLU and fuss at Boost Mobile, but Fox News can never say a cross word about Fox Entertainment, even if their Seth MacFarlane Sunday night cartoon bloc is a pagan's paradise.

On Dec. 13, the third Sunday of Advent, Fox's "American Dad" mocked the craziness of Christianity through its character named Roger, the gay space alien. (Yes, you read that right.) Stan Smith, ridiculed as the moronic conservative "American dad" of the show, yells at his wife for wearing a dress exposing her calves, which he says makes her look like a prostitute. He then praises Roger the Alien for wearing a "Little House on the Prairie" getup, complete with bonnet.

Roger is clearly speaking for this cartoon's atheist creator, MacFarlane, as he drips sarcasm: "Oh, I love your religion for the crazy. Virgin birth, water into wine. It's like Harry Potter -- but it causes genocide and bad folk music." When they arrive at their Episcopalian church, Roger continues the cutting remarks: "I hope I haven't missed the part where the three Chinese guys give perfume to the star baby. It's like the diaries of a madman."

But the plot gets weirder. The church is crowded, so ... Stan and his wife, Francine, have sex in a janitor's closet. When they return, most of the church people are ascending naked to Heaven in a Rapture scene. Stan blames his wife for causing him to miss it, and they split up. The wife then begins dating Jesus, who has returned to Earth and for some bizarre reason needs a girlfriend during the war of Armageddon. The rest of this asinine plot doesn't matter much, except that Jesus is once again cast on Fox as a very hapless, helpless, hopeless man.

As usual, Seth MacFarlane is writing vulgar, sexual and violent paint-by-number cartoons aimed squarely at boys aged about 12. This kind of war on Christmas should inspire more outrage and protests than the P.C. police making ads for The Gap.