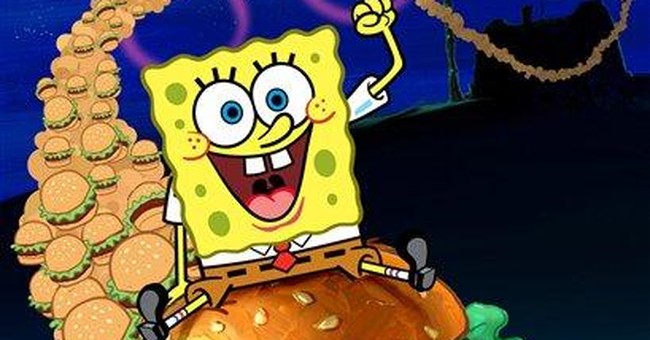 During his 20-year reign at Disney, Michael Eisner's commitment to family values was viewed with suspicion by many. The worries apparently were well-founded. His animation studio, Tornante, has a new clay-animated cartoon on Nick at Nite called "Glenn Martin, DDS." Eisner and Nick at Nite executive Cyma Zarghami claim it's a show for the entire family.

Even TV critics -- the crowd always wanting to applaud anything pushing the cultural envelope -- think it's outrageous to make that claim. "You know you're in for a bumpy ride when the first joke has to do with killing prostitutes," wrote Mike Hale of the New York Times. He wanted out of the dental chair when a tasteless joke about a "blood bath" of a circumcision by a "rabbi with Parkinson's" arrived.

Yes, this is the same Nick at Nite whose original 1985 lineup included "The Donna Reed Show" and "Dennis the Menace" reruns.

"Glenn Martin, DDS" has been heavily promoted across the Nickelodeon family of cable channels -- as well as on the raunchy Comedy Central network, a much more appropriate home for it. The plot centers around Dr. Martin's idea of putting his family -- wife, teenage son, almost-teenage daughter and dog -- in an RV to bring greater togetherness, but it's really just a plot device for allegedly hilarious on-the-road humor.

One much-advertised episode is "The Grossest Show on Earth," where Conor, the hapless 13-year-old son of the dentist, finds a new career -- as a circus act where his head disappears into the rear end of the elephant, which the elephant enjoys immensely. Audience members are shown vomiting into their popcorn.

This might make for family viewing at the Eisner estate. What about your home? This new circus act followed several failures. We're shown the blood and gore of Conor throwing a knife into the eye of the knife-thrower, and Conor throwing a bucket of gasoline on a smoking clown who burns to death. Scenes like this don't exactly ring with Eisner's promise of a show that "re-envisions the classic family sitcom" and "delivers humor in a mature, sophisticated manner."

In a different episode, Conor consults a spirit guide in search of "major boobage." The guide promises clarity, to which Conor replies, "I don't need clarity. I need Serenity -- and I need to see her naked!" When his wish is granted, the guide tells Conor to "get up on that."

Another episode focuses on Dr. Martin helping a Mafioso with a bad tooth. Introduced to Mafia members in a club, he asks if the women beside them are their wives. A mobster berates him: "Don't talk about our wives in front of the whores!" A woman named Crystal tells him she's "no relation to Billy Crystal, although I have faked an orgasm in a diner."

One shocked parent protested on Metacritic.com that "Nickelodeon is supposed to be a children's network, and they have this on during the dinner hour? We live in the Pacific time zone, and I was exposed to this while making dinner for my daughters, who are 5 and 7, and they had just finished watching 'The Penguins of Madagascar.'"

That's not an accident. What is truly revolting is that Nick at Nite is really hoping young children will stay for the orgasm jokes. The show's website actually boasts to that effect. "The premiere week posted double-digit gains for Nick at Nite over last year's like time period with kid, tween and teen demos ... The premiere episodes held 89 percent of its lead-in ratings ("The Penguins of Madagascar") with kids 2-11."

You really wonder how in the world these entertainment executives can look at themselves in the mirror.

Eisner's awful judgment began with his inspiration for the show: a fellow Disney executive's dog had a rear end that was "beyond disgusting." He explained, "When the dog was in the room, you just couldn't even look at the dog because you would be obsessed with this part of the anatomy. And when the dog turned around and walked away from you -- it was like, please. So I just wanted this dog in a television show."

The family dog on "Glenn Martin, DDS" has a large red anus. They're so proud of it that they highlight it on the show's website. The New York Times reports that Nickelodeon commemorated Eisner's "inspiration" by handing out plastic toy dogs that excrete brown jelly beans.

It's amazing that Eisner never tried this "mature, sophisticated" schtick with Mickey Mouse and Donald Duck. This man truly disgusts.