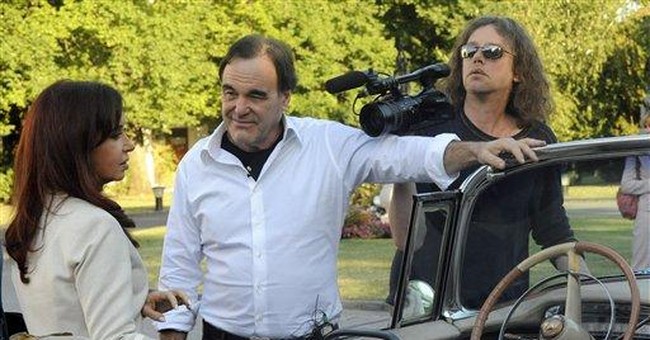 Many years ago, when Bill Maher's comedy show was hosted by Comedy Central and he was funny, his formula for success was truly unique. Every week two sets of political and/or cultural opposites were pitted against each other, and he refereed with humor. It was all designed for a good laugh and succeeded because once upon a time Bill Maher was truly funny.

Some producer really thought in extremes when they pitted Oliver Stone and Brent Bozell for one episode. I have to say that you were gracious, charming, engaging, and we enjoyed ourselves -- except for that moment when I chastised you for claiming you're a historian. You bristled and denied ever claming that moniker. I cited the source, an interview in some West Coast newspaper (I can't recall which one now). "I'm a filmmaker, that's all," you told me.

Problem is, Oliver, you're a historian whether you believe it or not. You make films about history and historical figures. You record history, and that makes you a historian.

Being a historian is not the problem. It's that you're a lousy historian.

Your last project was the movie "W." I confess I didn't watch it: I knew it would be a predictable left-wing spin about President George W. Bush being dumb and evil, and it could be worse because it could have been Vice President Dick Cheney. Yawn. It bombed.

You were back on Maher's show the other day talking about historical figures. Maher wanted to know why you haven't done a film about Ronald Reagan, since "that is the type of character you could do very well with." God only knows what he meant by that, but when you gave your answer, you were pretty blunt.

"Nixon always said Reagan was a dumb son of a bitch," you said, and the audience laughed, and you smiled and decided to take that statement further by agreeing with it. So you said, "You know, I think that he was," and the audience cheered and hooted and applauded.

See what I mean when I say you're a lousy historian? Don't take my word for it, Oliver.

I turned to Frank Donatelli, the White House Political Director under President Reagan from 1987 through 1989. I asked him what he thought of your observation. Here's what he has to say:

"Bill Maher and Oliver Stone have both made careers of ad hominem attacks on their political opponents. As Reagan would say, 'It's not that they're ignorant. It's just that they know so much that isn't so.' The literature as written by conservative and liberal observers is overwhelming in concluding that Ronald Reagan was fully engaged in implementing policies during his presidency that resulted in the longest economic expansion in our history and the end of the Cold War and the defeat of communism. His presidential reputation is growing and history will remember Reagan as one of the great presidents in our nation's history."

Ouch. I went to Richard Allen, Reagan's national security advisor and asked him what he thought. Apparently he didn't think much.

"Every respectable academic and popular analysis in the large and growing literature of the Reagan presidency and Reagan's presence on the national scene proves beyond any doubt the utter foolishness of the Oliver Stone remark. Stone has made an unsuccessful career of falsification, especially when it comes to Ronald Reagan. The actual dumbsumbitch is easy to identify."

That's gotta hurt. I asked Morton Blackwell. He was special assistant to the president between '81 and '84. You didn't score points with him, either.

"Stone must be jealous," he thinks. "All Reagan did was restore American prosperity, deep-six the Soviet Empire, restore the morale of the American people, and win two national elections by landslides. By comparison, Stone gained his notoriety by smearing people." Blackwell adds this observation as well: "Stone must be jealous. Reagan was principled, charming, and as honest as any politician can be. Stone revels in his own his image as a slimy slug on a toadstool."

Oh, my. Gary Bauer was Domestic Policy Advisor under the Gipper for two years. "That 'dumb son a bitch' ran circles around people like Oliver Stone and the other creepy Hollywood elites," he says. "He outwitted the Kremlin, restored the confidence of the American people, rebuilt our military, sent malaise packing and unleashed years of economic growth when he lowered taxes. Most Americans loved him then and miss him now. Oliver Stone is clueless."

Al Regnery is an historian -- a real one. "Dumb like a fox. Reagan always prided himself on the fact that people underestimated him. ... Stone, the dumb son of a bitch, is just the latest one to fall to the trap."

Finally, I couldn't resist. I asked Ann Coulter what she thought. She was quick. "Two uneducated, historically ignorant boobs sitting around talking about which president they think was the dumbest -- now that's some good TV."