Drawing a Line on Sexual Harassment

Brent Bozell and Tim Graham
|
Posted: Dec 20, 2017 12:01 AM
Share   Tweet
The opinions expressed by columnists are their own and do not necessarily represent the views of Townhall.com. 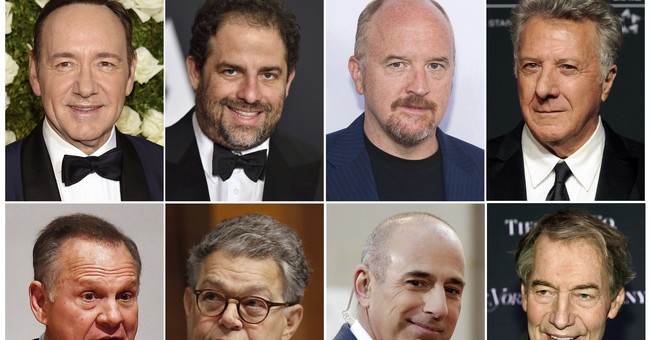 After a wave of stunning announcements and admissions about the serious alleged sexual misbehavior of Harvey Weinstein and others, observers might wonder whether any of the accusations pouring forward are exaggerated, or even false. Most denials have been strangely and unpersuasively worded, as in "I don't remember it that way." On the other hand, some accusations are raising eyebrows.

Does every charge amount to sexual harassment? Take the case of MSNBC's Chris Matthews. The Daily Caller reported that Matthews paid a $40,000 settlement to an employee back in the 1990s for "making inappropriate comments and jokes about her while in the company of others." The Clintons and the Weinsteins dropping their pants and making demands -- that's harassment. But if this is the extent of Matthews' guilt, he's a pig, not a harasser.

The picture is also muddied by accusers like Addie Zinone, who appeared on NBC's "Megyn Kelly TODAY" (aka "Megyn Kelly's Daily Sexual-Misconduct Accusation Show") to announce that she had consensual sex with Matt Lauer but now, looking back, finds it to be an "abuse of power," since he was a middle-aged star and she was a lowly 24-year-old production assistant. A memo to Zinone: You were a 24-year-old woman. Act your age. If he's a scoundrel, so are you.

Then there's makeup artist Kailey Kaminsky, who accused HGTV star Carter Oosterhouse of badgering her into performing oral sex. She told The Hollywood Reporter: "I was so worn down from his advances, so I did: that day, on that occasion. It was the first time. Then thereafter it was most every time we would shoot -- 10 to 15 times he put me in this position."

For his part, Oosterhouse acknowledged their intimate relationship ... but insisted there was consent and more. He said in his statement to The Hollywood Reporter: "I would have never done anything that I was not sure was mutually agreeable. The reality is that I knew it was consensual because she initiated it the first time and many of the 15 or so times we had oral sex thereafter." Kaminsky asserts her job was threatened. She says he once asked her whether she enjoyed her work. When she said yes and that she'd like to advance in her position, he stated he could be helpful if ... you get the point. But if that happened, that was not a threat. It was an offer. And she accepted. She stated, "I definitely went out of my way to pretend it was something that I was participating in willfully." We don't buy it.

Speaking of makeup artists, Jill Harth filed a sexual harassment suit against Donald Trump in 1997 and renewed her allegations in the fall of 2016. John Solomon at The Hill reports that she repeatedly sent Trump gushing emails during his presidential campaign offering to do his makeup and even testify about how wonderfully he treated women. "I also want to put it out there that I would be willing to say at a rally or somewhere how DJT helped me with my self-confidence and all positive things about how he is with women to counter any potential negativity that may come out at some point in the campaign," she wrote.

(We're not watching CNN rushing to the president's defense.)

Then there's the old notion of cashing in on allegations. Solomon added that Harth's lawyer, Lisa Bloom, "eventually started a GoFundMe.com fundraising effort to help Harth and located a donor that paid off Harth's mortgage on her Queens apartment in New York City."

Cases like these underline the need for a line of demarcation. There are levels. There's piggish behavior, immoral sexual activity, harassment. And, finally, there is assault. Women shouldn't be groped and harassed at the office. Businesses from Hollywood to Wall Street shouldn't tolerate powerful officials making sex a condition of career advancement. But it's also unfair for someone to consent to sex and then decide months or years later that it somehow wasn't consensual, destroying a man's career in the process.

Most cases aren't as clear-cut as an Al Franken prank photo. Evidence of harassment is often hard to produce, especially years or decades later. That's why cautious investigations and fine distinctions should be made before reputations and careers vanish within a news cycle.