A Rerun of the 'Da Vinci' Kook

Brent Bozell and Tim Graham
|
Posted: Oct 06, 2017 12:01 AM
Share   Tweet
The opinions expressed by columnists are their own and do not necessarily represent the views of Townhall.com. 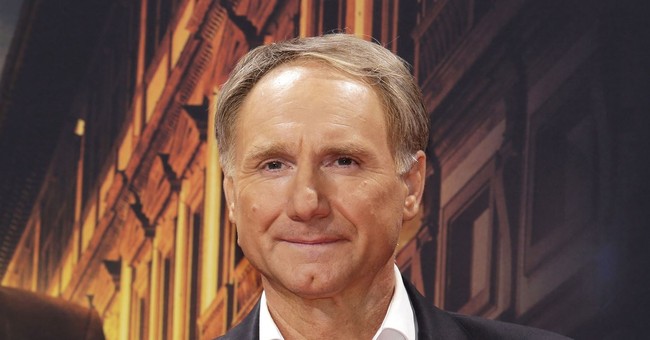 Dan Brown, the author of "The DaVinci Code," is back with another blockbuster anti-religion novel, and CBS "Sunday Morning" rolled out the red carpet on Oct. 1 to honor him and his massive commercial success. The segment began with what he called his "fortress of gratitude" -- his house loaded floor to ceiling, over several stories, with bookshelves ... stuffed with copies of Dan Brown's own books.

So we know who Dan Brown worships.

CBS correspondent Tony Dokoupil vaguely noted Brown has been attacked by "religious groups" for his "depictions of Christianity." Brown complained that the Vatican told Catholics to "say Dan Brown is telling lies." (Catholics need the Vatican to tell them this?) Dokoupil allowed Dan Brown to describe his critics, but couldn't seem to find anybody on his own.

Dokoupil asked, "Do you consider yourself anti-Catholic or anti-religion?" Brown replied "Absolutely not." But then he said there are dangerous religious factions that "take the metaphors and the myth of scripture and they hold them up a literal fact."

Brown's somehow not "anti-religion," but CBS announced his new book "puts God on the edge of extinction." Brown proclaimed "Traditionally, all the gods fall. And my question is, are we naive to believe that the gods of today will not suffer the same fate?"

Dokoupil followed up. "Would that be a better planet?" Brown responded, "I personally believe that our planet would be absolutely fine without religion, and I also feel that we're evolving in that direction."

But he's absolutely not anti-religion.

Welcome to how secular liberals spend their Sundays ... while thinking it's the churchgoers who are sharing a smug affirmation of their beliefs.

For all the folderol about "fake news," the media never found it necessary to challenge the veracity of Brown's scurrilous charges he posits as facts in his novels -- that Jesus married Mary Magdalene and had a child; that the Catholic Church took the human Jesus and cynically invented him as a god at the Council of Nicaea in 325; or those nonexistent "monks" in the Catholic group Opus Dei. They spent hours on ABC, CBS and NBC elaborating on Brown's "intriguing" theories, when what they were enthusiastically broadcasting was an atheist version of birtherism.

Brown's new novel, "Origin," once again features his hero, Harvard professor Robert Langdon, who tries to learn what discovery computer genius Edmond Kirsch was prepared to reveal that (as The Washington Post explains) "boldly contradicted almost every established religious doctrine, and it did so in a distressingly simple and persuasive manner."

Some critics are tiring of Brown's potboiler shtick. Post book reviewer Ron Charles complained, "For 100 pages, Brown talks like the pilot on a grounded airplane, assuring us that we'll take off any minute now." But finally, when the genius "begins to reveal his secret, some Roman Catholic zealot shoots him in the head," about which Charles joked: "Why couldn't it have been me?"

Brown is relying on an old formula. He sells books by merging fiction with alleged nonfiction. It's easy to imagine the national media wouldn't be as enthusiastic if his villains were a global Jewish conspiracy, or a global Islamic conspiracy. Brown would be seen as a hateful kook.

Back when they celebrated "The Da Vinci Code," the networks were hypersensitive to Muslim reactions to the mostly mild Danish newspaper cartoons mocking the prophet Muhammad. ABC aired a glance at one cartoon on two programs. CBS and NBC declared they would censor the images.

All religions are not treated as equally ripe for "intriguing" conspiracy theories. Christianity and Judaism are for the falling "gods of today," and where Hollywood's elites are concerned, "our planet would be absolutely fine" without them.