Jason Carter and An Ill-advised Run for Governor 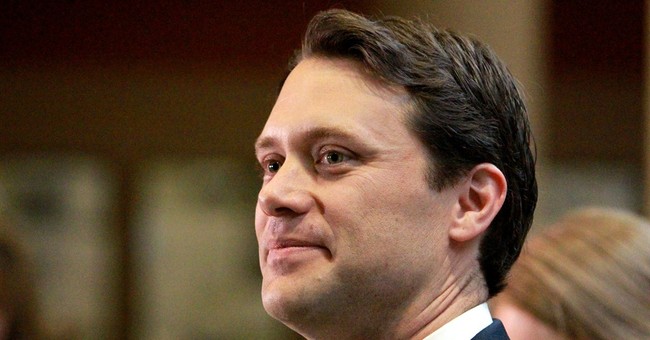 Georgia Democrats have staked their hopes for political revival on a That 70’s Show charade.

The last time members of each family occupied a statewide office was 1975.

From both a political standpoint, Carter’s opting into the race could perhaps amount to the most ill-advised in recent memory.

Despite facing two primary competitors, Republican Governor Nathan Deal has maintained relatively stable approval numbers and has found himself on no national radars as an endangered incumbent in next year’s cycle.

That’s thanks in part to checking off virtually every item of his legislative agenda, often done whilst bringing the other side into the fold. For example, reforms to the state’s cherished HOPE Scholarship, a likely focal point of Carter’s candidacy, were enacted with advising and consent from state House Democrats.

Yet that’s just the tip of the iceberg when it comes to the intra-party complications that could result.

Deal’s partnership with Atlanta Mayor Kasim Reed, himself regarded a future statewide option for Democrats, has been cited nationally as a model of getting things done. That’s translated into friendship and praise from the mayor, who advised his party this summer to pass on the governor’s race and focus finite resources on Nunn’s Senate bid.

“My opinion is Governor Deal has done a good job as governor” is a direct quote.

Beyond the awkwardness of past praise, the Democratic Party of Georgia itself appears hardly ready for the national spotlight the Carter-Nunn ticket is geared to generate. Its ranks have been beset with financial hardship and scandal, culminating in the resignation of a party chairman earlier this year and a special election to select a replacement.

To boot, Carter’s preferred choice in that contest was defeated.

Then there’s the double-edged sword that comes with being the grandson of Jimmy Carter. On the one hand, it provides built-in name recognition and instant access to a donor network crucial to running a viable campaign.

Yet it also carries the caveat of a landslide defeat at the hands of Ronald Reagan and the undisputable fact that a hefty swath of Georgia voters simply don’t mesh with the elder Carter’s politics.

Indicative of that: Democratic-leaning polling shop Public Policy Polling has yet to test the former president’s Peach State numbers despite including Sam Nunn in its first survey following Michelle Nunn’s Senate announcement.

Those factors serve to further undermine a midterm campaign in a state that’s not sent a Democrat to the Governor’s Mansion since 1998, when Roy Barnes netted 53 percent of the vote.

The three gubernatorial contests since have seen the party break 45 percent just once, and that was over a decade ago when Sonny Perdue dashed Barnes’s re-election hopes.

The latter’s 2010 comeback effort was rejected by a 10 point margin, meaning it’d take a remarkable turnaround to make that up in just four years’ time, regardless of how much money the Left pours into the effort.

While Carter likely poses a more formidable threat than the ever-polarizing Barnes, the odds of an upset remain unlikely. Georgia’s demographic shifts likely mean purple shades are coming, but it’d take some serious lightening in a bottle for the Carter-Nunn slate to bring it about next November.

All of which leaves Jason Carter a man arriving early for a would-be party, not Georgia’s next governor.