Does the Media Narrative of the Atlanta Shooting Being Race-Based Trace Back to the 2020 Election?

Brad Slager
|
Posted: Mar 22, 2021 10:55 AM
Share   Tweet
The opinions expressed by columnists are their own and do not necessarily represent the views of Townhall.com. 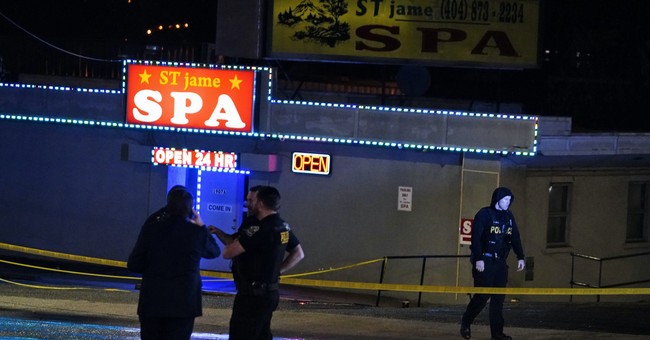 In the wake of the recent spate of shootings at some Georgia massage parlors the press has taken a curious position in explaining the cause. We are not hearing the usual harsh lectures about gun control -- even as legislation is being considered at the moment on The Hill. We are not being served the expected demonization of the NRA. Instead we are being told -- having it insisted, in fact -- that this was entirely due to anti-Asian bias.

This claim is being made despite the fact that among the eight victims were two whites. The incident took place at three separate massage parlors, indicating that the locations were a major factor in the targeting. The shooter has attested that his motivations were rooted in personal issues he had with sex addiction and the inability to be satisfied at these spas. But race is being touted as the motive, and one race in particular is repeatedly spoken as the target.

We next have the odd occurrence of the press turning its focus on one of the investigators. The lead sheriff on the case, Jay Baker, was found to have once posted an image of a gag t-shirt on social media, making what is interpreted as a racist comment about the Covid-19 virus. Later, over at Vox, Aaron Rupar made a disparaging interpretation of comments Sheriff Baker gave at a press conference, altering his words to reflect a sympathetic position towards the shooter. The media ran with this falsehood, and Baker has since stepped away from the case.

This reflects a notable insistence in the press, as the sheriff was in no way connected to the shooter, nor his actions, but they pushed this angle of bigotry towards Asians, since it fit within the narrative. Many reports were pointing out how Asians had seen a sharp increase in hate crime incidents over the past year, and they had a cause for this at the ready -- it was President Trump insisting on referring to Covid-19 as "The Wuhan Virus," or the "Chinese Virus." Seriously. The media is pushing this claim that a designation of a viral outbreak has led to a mass shooting, because everything is stupid these days.

There is an odd desperation in this newfound blame as they abandon the usual suspects following a shooting. The assurance we keep getting, absent solid evidence, feels like there is a broader context the journalists are operating within as they try selling this theory. Consider how frequently we have heard the Asian hate-crime statistics this week, all while the past year -- when we are told it exploded -- there has been a lack of the same coverage in balance. If this was such a blatant problem for a year why are we only hearing of it now?

The basis of this may lie in last November’s general election. Despite a Joe Biden victory the Democrats experienced losses elsewhere across the country, including more than a dozen House seats, as well as seeing GOP gains in state capitals. A large part of this push came from a surprising rise of support for Republicans among the minority voting groups. Trump, and the Republicans in other races, experienced surging support among Hispanic voters as well as significant gains among blacks.

Another demographic seeing an uptick of support -- Asian Americans. Democrat polling savant David Shor was interviewed recently concerning both parties, as they are each performing autopsies on the 2020 election. As he noted some of these trends and what they may portend, Shor was pointing out some of the shifts in support seen from 2016 to 2020. While he noted the Democrats losing a good share of the Hispanic support, and blacks dropping for Democrats by a couple of percentage points, he saw some trends about the Asian voters as well.

"The jury is still out on Asian Americans. We’re waiting on data from California before we say anything. But there’s evidence that there was something like a 5 percent decline in Asian American support for Democrats, likely with a lot of variance among subgroups. There were really big declines in Vietnamese areas, for example. Anyway, one implication of these shifts is that education polarization went up and racial polarization went down."

This could be the tell to indicate the new focus on this group being targeted, and Trump’s name being invoked regarding the shooting. The press appears to be falling back on their tested tactic of using racial division to drive voter trends. We are being told that the mere mention of "Chinese" in regards to the pandemic has led to ALL Asians becoming targeted for reprisals. The fact they are using one country to be the reason all people deriving from an entire continent are being racially profiled exposes some of the desperate thinking at play here.

Shor brings up the flaw in this methodology. The insurgency of college educated whites within the Democrat Party is altering the minority bases. "As white liberals increasingly define the party’s image and messaging, that’s going to turn off nonwhite conservative Democrats and push them against us." Note the results following recent media efforts. After a year of Black Lives Matter focus Trump saw gains among POC voters. After years of demonizing his immigration policies Republicans have made huge gains among Latino voters as a result.

Now the press is falling into their same trap, as journalists seem to be turning to this same strategy now towards Asian Americans. The results may be more surprises ahead for the Democrats, despite these new attempts at division.