Brad Slager
|
Posted: Feb 12, 2021 12:01 AM
Share   Tweet
The opinions expressed by columnists are their own and do not necessarily represent the views of Townhall.com. 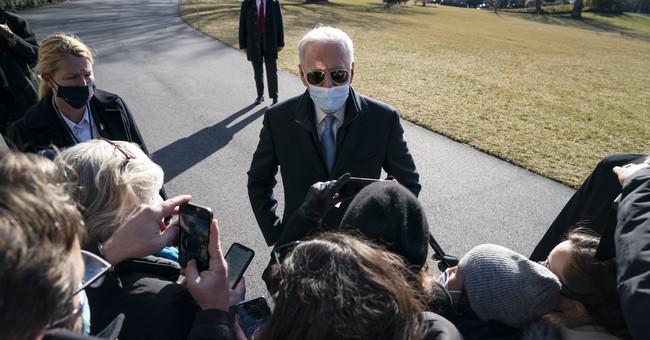 It has been with some amusement that over the past four years we watched segments of the media to express outrage at the favoritism Fox News would show for the president. The unspoken, but recognized subtext was, ‘’They cannot do that - only WE can do that!’’ For anyone in the press to pretend that a connection between journalists and an administration was unprecedented it showed a desperate attempt at deflection away from what has been a long established relationship.

We are now getting details that the civil union between journalists and the Democrats has already been reestablished, and the brazen manner in which this is playing out displays all of the comfort being experienced between the two entities. This is a tale involving a number of publishing outlets, players directly connected to the administration, and all of the expected romance as administration officials massage the story to avoid the appearance of impropriety. It has all the sizzle of a discount Harlequin Romance with a lame attempt at a political intrigue subplot.

At Axios one of their reporters, Alexi McCammond, was the beat reporter during Joe Biden’s campaign. In the course of her duties she fell into a relationship with T.J. Ducklo, Biden’s campaign press secretary, who then became transition spokesman and is now the current Deputy Press Secretary. Once revealed, Axios quietly reassigned the reporter to a position with fewer conflicts of interest. McCammond now would cover progressives in Congress, and the vice president. So the outlet did not remove the conflict of interest, they merely lessened it.

Despite the blatant ethical problems McCammond still managed to report on things concerning the Biden camp. In December she was still filing stories about cabinet appointments in the administration, and involvements with Kamala Harris’ family in January. After the inaugural, McCammond was on an Axios podcast and speaking with praise about the new president and his unifying message. At this stage Axios never made disclosures about their reporter having a serious personal relationship with a top-ranked administration official.

Politico began asking direct questions about the questionable connection a few weeks ago, describing the relationship as an ‘’open secret’’ the outlet asked for comments from Axios about the pair. Axios responded with a tepid statement to excuse away any issues:

“Alexi disclosed her relationship with TJ to her editors in November and asked to be taken off of the Biden beat. We reassigned her to cover progressives in Congress, the progressive movement, and Vice President Kamala Harris. Alexi is a valued member of the Axios team, and we stand behind her and her coverage.”

At the same time Politico reached out to the White House for comment on the duo. This led to a not-very-curious dose of timing. After it was declared to the White House communications team that Politico was running their piece on Tuesday there suddenly appeared on Monday evening a glowing feature on the Ducklo-McCammond relationship in People Magazine. This served to both position the connection as normal and not an ethical problem as well as diffuse any controversy the Politico piece might deliver. The White House got in front of the story and normalized things, delivering a ‘’nothing to see here, it is old news’’ style of deflection.

The feature is a chiffon-rich pile of political froth, one that highlights the ’’boy-meets-girl’’ cuteness and only alludes to the professional conflict; People describes the impropriety with a dismissive, ’’there were some wrinkles.’’ Then the magazine dutifully erects all of the safeguard barriers to prevent others from looking too critically at the couple.

"McCammond, a rising star on her beat, has talked about the added dynamic of being a Black woman in an industry not historically welcoming to either. And, as a group, female reporters have long faced the misogynistic accusation they become inappropriately involved with male sources."

The article also goes at length about Ducklo fighting off a cancer diagnosis, so only cold-hearted souls would see a negative in all of this. Very good job, People. The White House approves. You established that now critiques of this couple could be framed as either racist, or sexist -- or even both! Great work on their behalf!

As People described the issue, ‘’They know news of their relationship will stir disapproval over the optics and the timing.’’ And as those in the D.C. media universe know as well, the best way to combat these negative connotations is to deliver contrary optics. And then the next stage kicks in -- you ignore the problem entirely.