Brad Slager
|
Posted: Feb 05, 2021 1:57 PM
Share   Tweet
The opinions expressed by columnists are their own and do not necessarily represent the views of Townhall.com. 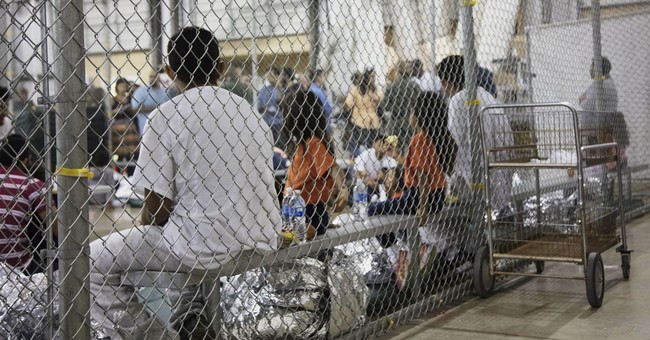 In an amazing announcement this week the Biden administration has declared they will be reopening a facility in Texas this week in order to temporarily house hundreds of migrant youths who have recently entered the country. If your head just tilted like a dog hearing a harmonica, you are not alone. All of a sudden, it appears, the concept of housing young children from other countries in a government setting is acceptable.

Yes, this sounds like a contradiction from a narrative we have been served for the past four years, but just you wait. I recommend wearing eye protection, as the flying shrapnel from euphemisms will be likely.

The location, in Carrizo Springs Texas, will be run by the Office of Refugee Resettlement is tabbed for "overflow’’ purposes, and will be able to house 700 migrant children. This is being dubbed a temporary influx care facility. That’s a handy shift in nomenclature. Also steps are being taken to avoid harsh PR assessments: The kids will stay in "hard-sided structures. Additional semi-permanent (soft-sided) capacity may be added if necessary, though ORR will always prioritize placing children in hard-sided structures over semi-permanent structures.”

Just that quickly, the practice of housing these arrivals is no longer placing them in "jails," and due to the pains taken in the quartering, "kids in cages" no longer applies. Gone too are the tales of crowbars used to separate families. As CNN describes it, this is a "facility for unaccompanied migrant children apprehended at the US-Mexico border."

The amount of double-standards the media have distributed just in the last month is to such an extent they must buy contradictions in bulk. The real amusement arrives when these purveyors of paradoxes attempt to lecture others on morals and ethics. Funny thing about ethical behavior -- it cannot maintain a fluid standard and remain a valid concern. Yet the press continues to insist they are the arbiters of social propriety.

Probably no issue exposed the dual rulebook policy of this nation’s referees in the press better than the way they addressed the matter of immigrant minors who come into the country. When early in President Trump’s term it was exposed that holding facilities had children in chain-link holding paddocks the narrative of "Trump is placing kids in cages" began, topped off with the additional drama of "children being ripped from their parents’ arms." It was a grievous situation and said to be morally repugnant.

And as we all know, it was also a lie. Photos used to display this horror were Obama-era pics, and that is just the start of the subterfuge. Trump had not passed new immigration laws but was enforcing existing policies, most signed under Democratic leadership. This was only the start of the misdirection in the press and newly applied moral standards, based on the party in power.

In almost every case, where the media were dumping truckloads of scorn on Trump’s actions and the conditions in locations they were referring to facilities and practices which predated Trump’s election. Most of the housing was not only older, but came into usage during the prior presidency. When it was revealed that some facilities were housing very young children the outrage intensified. These were described as "baby jails," or "toddlers are being detained." Trump was even scorched for calling these Diaper Dens of Iniquity, "Tender Care Facilities," in an attempt to hide the reality inside, went the claim.

Except, once again, the reality was these were pre-existing facilities. Not only were these buildings commissioned in 2010 -- to reiterate, under the Obama administration -- but the request filed by the Department of Health and Human Services used the term, "children of a tender age." What needs to be noted: when these buildings and policies were enacted during those years the press had no concern, no bother with the actions. Only under Trump did they become a moral problem.

I covered some of the events swirling around the second-largest such facility in the country, located in Homestead, Florida. This too was a former government building that had become converted for housing purposes -- in 2016. Democrat politicians attempted to barge into the facility to see evidence of the supposedly grueling conditions the children were living under. Once inside the politicians and the press found children cared for, living in dormitory style housing, and being fed and taught daily. The harshest condition found -- many kids had to use sweaters, as they were not used to indoor air conditioning.

One other detail emerged from the visit. With over 1,100 children inside, the amount of them who came to this country as unaccompanied minors was over 95 percent. This defies the narrative of the Trump administration freely separating all families who came across. It also matches the claims being made today of Biden’s bid to house these same children.

During the presidential debate the issue of the cages came up, and who built them. It forced the press to come to terms with the fact that what they had been witnessing were holdover policies of the Obama-Biden years. Yet they had to recouch everything to maintain the outrage. The Washington Post went so far to draw the distinction it was resorting to using the word "But" in its headline, in laughable fashion.

It is a remarkable evolution to behold over the span of a handful of years. Obama’s policies were tough to rationalize for the press, so they chose to simply avoid the issue entirely. When those same practices were enforced under Trump, they became inhumane and immoral, and now today they are back to being uncomfortable but necessary steps taken by a benevolent Biden. The contortions in the media to explain away these actions are simply remarkable to behold, as they continue to expose their fealty and avoidance of facts.