Brad Slager
|
Posted: Sep 11, 2020 1:04 PM
Share   Tweet
The opinions expressed by columnists are their own and do not necessarily represent the views of Townhall.com. 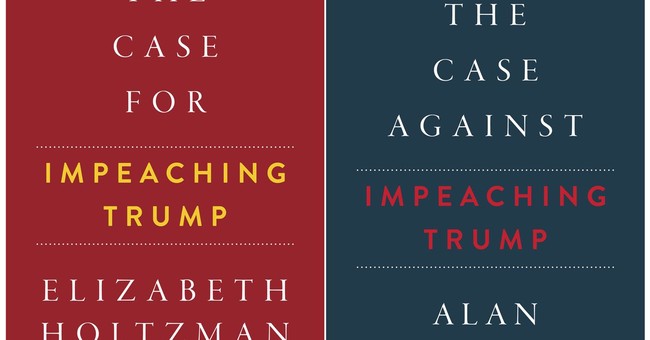 At the moment Bob Woodward is the journalist of note. His upcoming book "Rage," centered on the president and based on a number of interviews he quixotically conducted with the writer, has already sparked headlines ahead of its release next week. One controversy deriving from the "revelation" of Trump’s quotes regarding the pandemic outbreak (quotes he made in public back in March, mind you) is that Woodward sat on these until this book release, possibly at the expense of public health.

Clearly the sainted Washington Post icon wanted to have the biggest impact timed so close to the election, and a large number of authors have the same idea. If you were in the market for a political read ahead of casting your ballot you will find the task daunting.

While many in entertainment and media have an avowed dislike of President Trump, one industry that may be in conflict is publishing. Leading up to the upcoming election there is a literal flood of books coming out focused on the president -- after initial research I had to stop looking when I gathered close to three dozen titles being released since the summer up to the vote in November.

What's the telling is that I was limiting my list to either prominent political names or members of the media; there are numerous others and this has been the case during Trump’s brief political career. There is a clear hate/love relationship involving the publishing houses, leading to a true paradox in the literary market. With the exception of a handful of titles these releases are almost uniformly negative in the approach to the president, a sign that book sellers are both willing to attack the man and at the same time desperately want him to remain.

Since his rise in the political ranks Donald Trump has nearly single-handedly resuscitated the book-selling industry. Despite having two full terms in office there have been more than twice as many volumes written about President Trump than Barack Obama. To date over 1,000 titles have been printed regarding the man, and the surge is only increasing in these weeks of the campaign cycle.

The reasons for this are both obvious and numerous. The polarity in our country is a factor, but so is the media's disdain for the president. So entrenched is their opposition that they are willing to promote nearly any release that scorches Trump. Rachael Maddow had two of her highest-rated shows recently when she featured these releases. She managed the rare feat of hitting 5 million viewers when she had on Michael Cohen to promote his tell-all "Disloyal." That was bested earlier this summer when Trump’s niece plugged "Too Much and Never Enough: How My Family Created the World's Most Dangerous Man."

Her familial expose has been a publisher’s dream. That release saw nearly 1 million sales on its first day -- which includes pre-sales, e-books, and audio editions. It has since gone on to have 20 printings, a remarkable figure. John Bolton had lesser but still impressive sales for his "The Room Where It Happened," approaching the 2 million mark in total sales. Bolton represents another factor behind this volume of volumes coming out; there is a uniquely flush amount of players available. Normally at the end of a presidential term the main figures are freed to detail their time in the administration, but the Trump era has seen a high level of turnover, so these former operatives have found a chance to cash in post-termination.

Cohen and Bolton are just the latest, as many have come to realize that any tangential connection to the administration is grounds for a book deal. Former contestant from "The Apprentice" Omarosa Manigault had her dismissal tome, as did the former White House aide Madeliene Westerhout, who was fired after she went deep in her cups and drunkenly leaked sensitive intel. Disgraced FBI figure Peter Strzok has his new version of the Russian collusion tale, and even diminutive firebrand Anthony Scaramucci had his tell-all of his career in the White House -- all eleven days of it.

The press has been no less eager to get their opinions out ahead of the crucial vote...because their current daily platform is not enough to express their impressions. Brian Stelter has been on the charts for a couple of weeks, his CNN cohort Jeffrey Toobin has "True Crimes" out, and Michael Schmidt of The New York Times has chimed in with "Trump Vs. The USA." The Washington Post is not left out as the paper released "The Trump Assault On The Truth," and two of its reporters, Kevin Sullivan and Mary Jordan, want to remind of the impeachment proceedings just before you vote with "Trump On Trial."

One of the more amusing, and possibly tempting reads, could be "Liar’s Circus," by Carl Hoffman. He embedded himself on the trail with the Trump rallies across America, what is described on the cover as a "strange and terrifying journey."

Now while there is a smattering of pro-Trump releases -- Byron York has a calm and sober "Obsession" released this week, and others arrived from Lee Smith, Lou Dobbs, Sarah Huckabee Sanders, and Sean Hannity -- they are certainly flooded over by the mass of hit-piece releases.

Perhaps there is no better way to illustrate just how many Trump-based books are being delivered by a front-loader than the title arriving early next month. There have been so many books released in the Trump era that we can get "What Were We Thinking?" by Washington Post book critic Carlos Lozada. He studies 150 books about the Trump era that have been released, which can sound like an amazing total until it is realized that this comprises only about 12 percent of the published titles centered around this president.

So yes, while it appears the authors and book sellers are targeting President Trump specifically with dozens of new titles with a November defeat in mind, there is a firm reality acting as an undertow. Based on the business he generates, publishers have to hope for no other result than a Trump victory. Four more years of this kind of output will possibly save the dying industry.