While Journalism Is Unthreatened by the COVID Crisis, it Might Be the One Most in Need of a Remedy

Brad Slager
|
Posted: May 07, 2020 3:00 PM
Share   Tweet
The opinions expressed by columnists are their own and do not necessarily represent the views of Townhall.com. 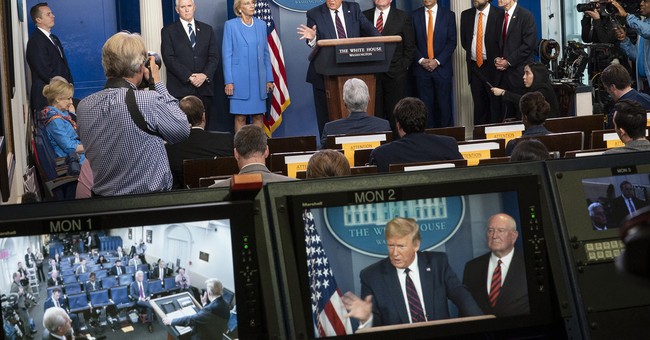 Whatever happened to ventilators?

Recall, for weeks it was the only thing our national media complex was concerned about. We were told about the need for the devices, the projected amounts we would require, how horrible it was that we did not have a sufficient supply, and how other nations had ventilator readiness exceeding our own. Ventilator access dominated the news coverage, was the leading topic at the daily White House task force briefings, and concerned social media.

Then these crucial valuable vital hyper-important medical devices completely disappeared from the news cycle. This week some reports were less enthusiastically detailed -- the U.S. was in the process of shipping hundreds of ventilators to Mexico, as that nation was approaching its virus peak. We, as a nation, in such dire need of these supposedly rare remedial tools, in truth have a large enough supply to donate to others.

In short order we careened from being direly lacking, to sitting on overstocks of ventilators. This by all appearances was a media-fueled hysteria. Across the country states are finding themselves in a surplus scenario regarding ventilator supplies. Wisconsin, for one example, is sitting on four times the amount of the machines than is currently needed. New York, which dominated the needy headlines as requiring 40,000 of the machines, weeks ago had quietly lent a number of its excess ventilators.

The answer to this by some is, Well sure, the supply finally caught up to the need -- except where are the follow up reports to this reality? Considering the way the shortage had been reported why is there no enthusiasm behind the ventilator problem being satisfied? It is due to the cycle of the media during this pandemic to only report negatives -- whether or not they actually existed. Once a problem is either addressed or shown to be severely overblown it is not deemed as useful information to the public; there are other crisis scenarios to blast across headlines.

It is no secret the press corps has been eager to paint President Trump in as negative a light as possible regarding the pandemic response. The contradictions we have seen from journalists have become legion. He was called inept for not halting travel from China, then when he instituted the ban he was called ‘’racist.’’ The media complained they were not being given updates properly, then when his daily briefings proved popular the same press called to halt covering them. Trump was criticized for supposedly not relying on medical professionals, then the press spent its time trying to discredit Dr. Deborah Birx and Dr. Anthony Fauci whenever they had a chance.

But more than the partisan childishness it has been the amount of times the media has been flat out incorrect. It was claimed the administration took no action early on in the outbreak’s days but to do so had to ignore the travel ban and his formation of the coronavirus task force in January (a time when the same press corps was downplaying the severity of the virus.) They accused Trump of refusing test kits from the World Health Organization, when those were never offered. But the largest error of all has to be the incidents of failed projected mortality.

In Florida Gov. Ron DeSantis has been one of those GOP leaders absorbing his share of scorn from the press and Democrat leaders for not being more totalitarian. It has been reported that Florida will surpass Italy in the death counts, and will become a worse COVID-19 hotspot than New York. You see already the fractured logic in the press when they do not hold contempt for Andrew Cuomo, even as they hold up his disastrous result as the viral watermark for Florida to surpass. But DeSantis was having none of it.

In a presser from his state capitol he laid out the numbers to show how far removed from reality the estimates made in the media had been. After showing how much lower Florida’s death counts were than New York, and other states, DeSantis noted how it was reported that by the end of April Florida would be inundated with over 460,000 Covid hospitalizations. This would have led to a system collapse, given the state only has a 70,000-bed hospital occupancy. As he showed, the admissions rate was just over 2,000 and it is a figure that remained relatively flat throughout the month.

This type of gross overreporting was seen on a national level. We were told previously -- sometimes promised -- that we were going to experience at least 1 million deaths attributed to the coronavirus outbreak. Then we saw new models stating 1.7 million possible deaths, and even more revisions taking the number beyond 2 million. The media loved pushing these numbers and pumping them up. What they do not love is weighing these hysterical predictions against the actual results.

Those figures have now been revised anew, coming significantly lower now, of course. By any standard we would have to say that we are performing remarkably well in the light of those projections, and yet the press would never come close to praising Trump for avoiding those dire figures. Now they talk of our social distancing being the reason we tamped those numbers down, but Trump will never be credited for encouraging the quarantine actions. They also ignore the initial reports.

When that one million figure was first bandied that was on the conservative side of the estimates. The low end estimates had 700,000 dying by the end of the year as experts at the time were saying containment was too late. We have not hit the 100,000 mark yet and we are seeing the downside of the curve taking place already. The press, despite these encouraging numbers, are still not satisfied.

We have seen the narrative calling to shut down the country shift, from the need to curtail the outbreak, to then needing to flatten the curve. But now that it is happening they continue to call for us to stay shuttered, to continue to extend our economic misery. They applaud the arrest of a hair salon owner because she risks lives, but big box stores like Home Depot remain open down the road. Protests to open the country back up are positioned as staged by dangerous MAGA-hatters who want death spread to others.

We need to inoculate ourselves from these feverish media hysterics who by all appearances have been vaccinated from digesting the facts.