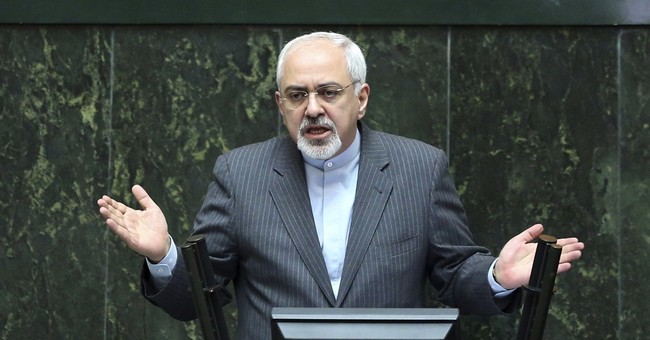 Obama said, "For the first time in nearly a decade, we have halted the progress on Iran's nuclear program."

But, Mohammed Zarif – Iran's foreign minister who cut the deal in Geneva – said the agreement enshrines Iran's nuclear capabilities by emphasizing "at two different points that there will be no solution without [the existence of] a nuclear enrichment program inside Iran."

Indeed, as reported by the World Tribune:

In a move that violated United Nations Security Council resolutions, Western powers such as Britain, France, Germany and the United States would lift many of the sanctions imposed on Teheran over the last three years.

"The U.S. administration, acting consistent with the respective roles of the president and the Congress, will refrain from imposing new nuclear-related sanctions," the agreement said.

"Comprehensively lift UN Security Council, multilateral and national nuclear-related sanctions, including steps on access in areas of trade, technology, finance, and energy, on a schedule to be agreed upon."

The reference to the UN resolutions above is significant, as on five separate occasions between 2008 and 2012 the Security Council adopted resolutionsdemanding Iran stop all enrichment. This agreement tossed all of that aside, pivots 180 degrees and legitimizes the planet's largest state sponsor of terrorism as a worthy new member in the Nuke Club.

Al Manar News, the Lebanese based network, hailed the Iranian "victory" as proof that the Iranian people successfully withstood the international "pressure" from the sanctions and UN demands. Further, Al Manar reports, "Zarif said that Tehran's right to peacefully enrich uranium is enshrined in the nuclear agreement with world powers."

So, is Iran's nuclear program "halted" – or, "enshrined." Hard to figure how it could be both.

"The deal," – the same one that Obama says halted Iran's nuclear program – specifically "allows Iran to continue its activities at the Arak, Fordow, and Natanz facilities," according to the Al Manar report and multiple other sources.

The White House touts that in the six month temporary agreement, the Iranians are committed to halt operations at the Arak facility that has been of grave concern for years. The secret Arak facility was uncovered first in 2002 as home to the "heavy water" nuclear fission process critical to develop "the capability to make separated plutonium and highly enriched uranium, the two main nuclear explosive materials."

But, as former U.S. Ambassador John Bolton explains in the following video interview, construction at Arak has been delayed. "They couldn't operate it anyway!" Bolton almost screamed during the interview. "It's not finished construction. Iran has solemnly committed to what it was physically incapable of doing anyway," Bolton said with sarcasm in full force. The agreement "is a complete red herring," he said.

Acknowledging the same psychologically "critical victory" for Iran as Mohammed Zarif trumpeted in the Al Manar report, Bolton concluded that "Iran is now on the verge of achieving its 25 year-long goal of getting deliverable nuclear weapons."

As the agreement was announced, Supreme Leader Ayatollah Ali Khamenei and Iranian President Hassan Rouhani straight-faced promised yet again that Iran "will never develop" a nuclear weapon – although they also pointed out that the agreement sealed the regimes' "nuclear rights."

This would be the same Ali Khamenei who just hours before the recent round of Geneva talks resumed saw fit to refer to Israel as a nation of"unclean rabid dogs" unfit to "be called human" and enrage a crowd of "tens of thousands of Basij militiamen" to chant the too familiar "death to America, death to Israel" refrain. The following from The Times of Israel:

In an address to an assembly of tens of thousands of Basij militiamen, Khamenei declared that Israel was doomed to fail and characterized the “Zionist regime” as the “sinister, unclean rabid dog of the region.” He also said Israelis “cannot be called human beings.” Footage of the event showed the crowd shouting “Death to America” and “Death to Israel.” More here

Instead of bolting from Geneva in disgust, John Kerry chose to minimizeKhamenei's vicious outburst: "Obviously, we don't believe that anything is served with, you know, names that challenge everybody's sense of propriety and justice and rectitude." Instead, Kerry blindly plowed forward and inked the agreement – preferring instead the self-delusion that Khamenei probably didn't really mean what he said and that the regime could be trusted.

A lingering question has long been why the Iranians – blessed with thesecond largest proven natural gas reserves and fourth largest oil reserves in the world - are so obsessed with nuclear energy, if not for the bomb? Perhaps it is that the Ayatollah's are committed to green energy sources and fighting global warming? Kerry and Obama would like to believe that, too.

Of course, our Secretary of State is comforted that the Geneva agreement includes the line, "Iran reaffirms that under no circumstances will Iran ever seek or develop any nuclear weapons." There's the "we-can-trust-them" factor that is supposed to make the world rest more peacefully – forget the "death to America and Israel" rhetoric.

Others can't help but recall a celebratory – albeit tragically naïve - Neville Chamberlin who took great stock in Adolph Hitler's promise in 1938: "I shall not be interested in the Czech State anymore, and I can guarantee it." The world knows how that worked out, particularly the Jewish people, who rightfully take the existential threat from Iran most seriously. Bret Stephens, David Horowitz, Ben Shapiro, Daniel Pipes and a host of other commentators and experts have already drawn the unavoidable comparisonto Chamberlin's folly.

Charles Krauthammer explained (video here) that enrichment – which the agreement specifically grants Iran – "is the dam against proliferation. Once a country anywhere can start to enrich there is no containing its nuclear capacity... That is why there was so much jubilation over this in Tehran." Calling the agreement "a sham from beginning to end," Krauthammer said "this is the worst deal since Munich."

Comparisons to Hitler are wrought with risk, and for sure the Ayatollah's are not Hitler. Hitler never had a nuke.