ObamaCare: They lied about all those jobs, too. 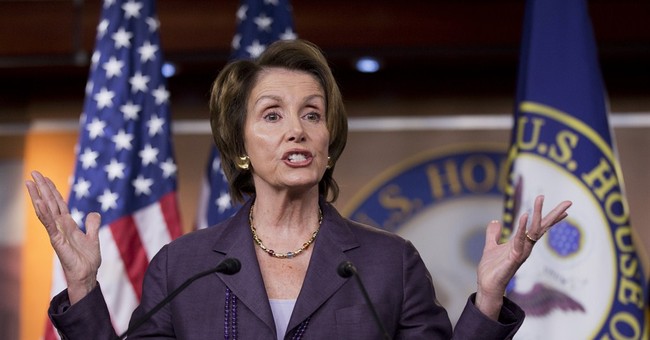 "So, this bill is not only about the health security of America; it's about jobs. In its life it will create 4 million jobs; 400,000 almost immediately."

The evidence is overwhelming that if Nancy Pelosi says it, it probably isn't true or necessarily connected to reality. After all, as CNN's Jack Cafferty summarized after an on air rant against the former Speaker of the House, "What a horrible woman she is!"

But, she and many other Democrats sold ObamaCare on a promise that it was a big time jobs bill. Not coincidentally, they were making those claims at time when more than 15 million people were unemployed. Claiming ObamaCare was a jobs bill was the "spoonful of sugar to make the medicine go down" – pun intended – when millions of Americans were out of work.

Critics understood that all the new and increased taxes, regulations, mandates and penalties would kill – not create – jobs. But, Team Obama dismissed naysayers as "fear mongers" or worse.

Along with so many other promises about how ObamaCare would create heaven on earth, the jobs claim was pure fantasy. According to the Labor Department's most recent report, the Obama economy is still 2.3 million jobs below the pre-recession level of employment, and that's with a workforce eligible population that has grown 11 million in the same period.

ObamaCare redefines "full time work" as just 30 hours per week; a provision that even Obama's Big Labor supporters said will "shatter" the American workforce. Businesses will be required to provide mandated insurance coverage or pay the penalty for defined full time employee. That's a huge financial incentive to hire part-timers or to reduce the average workweek hours for current employees.

And, guess who is the hardest hit….low and modest wage earners. The people Obama claims to be "looking out for." Jed Graham at Investor's Business Daily has been following the workweek trends for quite some time. Check out the following graph to see the stunning disparity to the average workweek for low-wage vs. higher earning Americans since Obama came into office.

To answer the question of whether ObamaCare is having a negative impact on work hours, one has to focus on what is happening in industries where wages are low and the ranks of the uninsured tend to be high.

Such industries, with tight profit margins and limited pricing power, have little wherewithal to take on substantial new costs and are most likely to cut work schedules to just below the 30-hours-per-week threshold at which ObamaCare employer penalties hit.

IBD has been doing such an analysis and continues to find that something is seriously depressing the hours worked by modest-wage earners.

A closer look at the industry hours worked reveals two distinct job markets. Private industries where pay for nonsupervisors averages up to about $14.50 an hour employ 29 million workers (roughly the bottom quartile). In these industries, the workweek is back near the 27.4-hour record low seen at the depth of the recession in 2009.

Meanwhile, the average workweek for the 85 million jobs that comprise the rest of the private sector is 36.9 hours — an hour. Read more.

The Federal Reserve's newly published Beige Book, the official Summary of Commentary on Current Economic Conditions by each of the twelve Federal Reserve Districts, includes ten direct references to ObamaCare and its regulations. Each time the Fed's commentary notes how the legislation "has hurt employers, increased costs, and/or depressed hiring," according to a summary report by the Heritage Foundation.

Millions of new jobs along with promises of lower premiums, you can keep your doctor and your insurance, and a website as easy as buying a TV on Amazon, are among the fantasies that are now the "train wreck" that is ObamaCare. And, the worst is undoubtedly yet to come.