US Can Help Ensure Haiti’s Citizens Have a Real Future

Bob Barr
|
Posted: Jul 17, 2019 8:41 AM
Share   Tweet
The opinions expressed by columnists are their own and do not necessarily represent the views of Townhall.com. 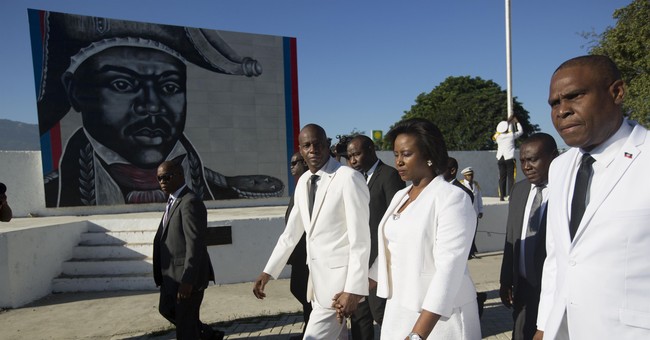 Last week, the President of Taiwan visited the United States and four other countries, including the small Caribbean nation of Haiti.  A visit by President Tsai Ing-wen to Haiti might be viewed with surprise by some observers.  However, to those familiar with economic and strategic factors important to both Taiwan and the United States, the fact that Taiwan’s chief executive included a stop in Port-au-Prince during her visit to Washington, DC is significant.

Haiti is one of only 18 countries that still recognize Taiwan diplomatically.  Shoring up that support at a time mainland China is moving significantly to increase its economic and military presence in our hemisphere, is important not only for Taiwan but for the U.S. as well.

Also important for America’s interests in the region is the fact that Haiti early this year joined with the United States in recognizing Juan Guaido as Venezuela’s legitimate leader.

When Jovenel Moise took his oath of office as Haiti’s 42nd President in February 2017, he inherited a government that had forged extremely close ties with the leftist regime in Venezuela.  During his long tenure in office – from 1999 to 2013 – former Venezuelan President Hugo Chavez used his personal charisma and his country’s vast supply of oil to win friends throughout the region.

Moise’s predecessors benefitted greatly from Chavez’ largesse; receiving huge quantities of Venezuelan oil under an extremely beneficial deferred payment plan.  The “Petrocaribe” program was launched in 2004; but instead of boosting Haiti’s economy, it morphed into a cash cow for the cadre of corrupt politicians that have controlled the country’s levers of power for the past quarter century.

The Petrocaribe program was structured by Chavez as a vehicle through which to gain political influence throughout the Caribbean.  It never became, and was never intended to be, an economically viable program.  Petrocaribe generated hundreds of millions of dollars that were supposed to be used to fund desperately needed infrastructure projects in Haiti.  Instead, most of the cash generated was diverted into personal bank accounts controlled by those in power prior to 2017, including Marcel Martelly, who became president in 2011.

Before becoming Haiti’s president, Martelly was a well-known singer.  As president, he was a favorite of Hillary Clinton when she served as Secretary of State.  Martelly also is a friend of Bill Clinton, who somehow had managed to have himself named a United Nations “special envoy” to Haiti following the massive 2010 earthquake. Even as Martelly basked in the glow of the Clintons’ friendship, he continued his close friendship with Chavez; and was rewarded with the honor of serving as a pallbearer at the Venezuelan leader’s 2013 funeral.

The long-standing and systemic inability of Haiti’s government to fund vital domestic programs worsened as a result of the devastating 2010 earthquake that rocked the country.  Despite the injection of $10.5 billion in aid from numerous private, government and international organizations (some channeled through the Clinton Foundation), hardly any of the money found its way to improving the living conditions for Haiti’s beleaguered citizens.

Haiti’s position as a transshipment point for illicit drugs coming from South America to the United States, has made matters worse -- expanding opportunities for corruption.  This scenario is well-known to the U.S. Drug Enforcement Administration; but the Obama administration did little to address the problem, even though many of the corrupt officials in Haiti maintain residences and bank accounts on the U.S. mainland.

The good news in what otherwise presents as a bleak picture for Haiti’s future, lies in the fact that the current president, Jovenel Moise, is not part of the corrupt underbelly of Haitian politics.  He is a man highly motivated to do the right thing for his country; and in so doing, continue friendships and alliances that benefit his country, the region, and the United States. But there is a catch.

As a result of changes made to Haiti’s Constitution more than 20 years ago, the President is extremely limited in his ability to fight the money and corruption that has fueled Haiti’s poverty for decades.  His hold on power that is so vital to the country’s well-being is tenuous; and he needs all the help he can get from Haiti’s true friends, including the United States.

Jovenel Moise may very well be Haiti’s last and best hope for a legitimate government that actually serves the people.  The Trump administration must not let slip by the chance to help ensure that this historic opportunity for the Haitian people is realized.