Bob Barr
|
Posted: Jan 27, 2016 12:01 AM
Share   Tweet
The opinions expressed by columnists are their own and do not necessarily represent the views of Townhall.com. 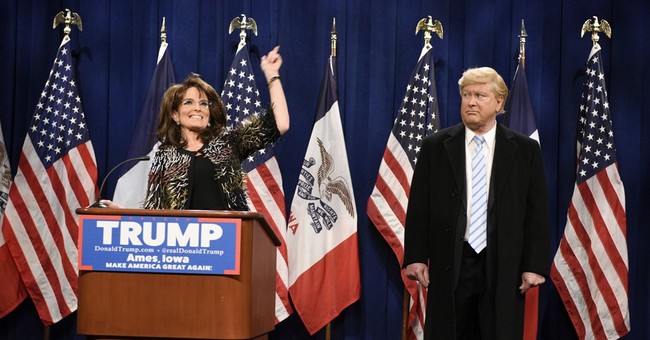 Attempting to describe Donald Trump in conventional political terms is like trying to explain a smart phone app to a Neanderthal. Despite the candidate’s claim to be “conservative,” looking at Trump’s “political” past, one would find ample support for policies at the heart of an avowed leftist; including progressive taxation, gun control, and single-payer healthcare. Even if one were to afford Trump the benefit of the doubt that his views have genuinely “evolved” rightward since his days of palling-around with the likes of Al Sharpton and Hillary Clinton, the man remains more a chameleon than a conservative.

For example, where he would attempt to solve America’s immigration issues -- a key concern of conservatives -- Trump would vastly expand the size and power of the federal government. In combatting domestic terrorism threats, Trump would gut religious freedoms conservatives have fought hard to preserve, while further curbing civil liberties and privacy rights. Other “policy” statements Trump recently has espoused make even less sense; for example, championing ethanol regulations as a means of fostering “energy independence,” and eminent domain as a way to create jobs. Always a fast moving target, Trump often changes his positions from one ideological polarity, to the other in a matter of hours as he mentally works through how to “make America great again.”

On the surface, Trump’s kitschy campaign tagline might seem like just another hollow campaign ploy to take advantage of the growing political unrest on both sides of the ideological aisle.  However, when looking at Trump’s stances both in the past and in present day, a common theme emerges that sheds a light on what a Trump presidency would look like, and what it would mean for the future of conservatism. That theme? Trump’s fondness for authoritarianism.

While Trump’s opponents in the GOP race moor themselves to traditional conservative values such as cutting spending, taxes, and government, Trump eschews such specificities as unimportant nuances. He prefers instead to focus on broad, abstract problems such as “illegal immigration,” “terrorism,” and “outsourcing.” It is always easier, of course, to avoid tough questions or criticism by speaking in platitudes. In this way, Trump can appear to remain relatively consistent, notwithstanding that he is not. Even when forced to elaborate on details, he is seemingly unaware of the policy specifics his campaign has crafted for him. Trump apparently views rigid adherence to these dogmas, no matter how sacred to conservatism, as unnecessary if not silly constraints on his power to achieve his goals for America.

In Trump World, if President Trump has to raise taxes on the rich in order to pay for his border wall or to deport millions of illegals, that’s just the cost of making America great. If he has to undermine the First Amendment to keep tabs on Muslims, that’s the price we must pay to keep America safe. If his protectionist policies dramatically raise the cost of goods for middle class families, that’s the cost of making America less dependent on countries like Mexico and China. And, if Congress is not on board with any of his plans, then he will be forced to take matters into his own hands, just as Obama has done.

This is precisely how Trump and his supporters rationalize his plans for using executive power. Whereas Obama is viewed as a liberal elite who usurped power to do wrong, Trump fancies himself a benevolent dictator who must do whatever it takes to circumvent an ineffectual “Establishment” Congress for the greater good. In Trump’s case, his supporters actually excuse potentially extra-constitutional methods – the same they accused Obama of using – since it is not Trump but the Establishment that has pushed America to the breaking point. In other words, it’s not Trump’s fault he has to go it alone; it’s Congress’ or the media, or the other candidates.

At least he’s “telling it like it is,” his supporters repeat; seemingly unaware (or uncaring) of what “it” really is. Yet, it really does matter what the meaning of “it” is.

Contrary to what Trump’s supporters may believe, there is no “thin line” that separates a benevolent dictator from a tyrannical one; they are both dictators. Whether one promises to govern with a gentle hand or an iron fist, it requires a unilateral, unchecked Executive Authority  that is not possible without first undermining the Constitution. And, without the Constitution’s legal safeguards against the autonomous actions of men like Trump and Obama, we are left with only a promise of altruistic intentions to keep us safe from total tyranny. The streets of Washington are paved with such broken promises.

South African Doctor Who Raised Alarm About Omicron Variant: 'Symptoms Were So Different And So Mild'
Townhall
Aaron Rupar gets called out for 'blatantly lying' about what Rep. Nancy Mace said about natural immunity
Twitchy
Chuck Todd Lets Cat out of the Bag on Media’s Obsession With New COVID Variant
Redstate
Your Thanksgiving Weekend Round-up! Shoplifting, Black Supremacy and Antifa Weeps!
PJ Media