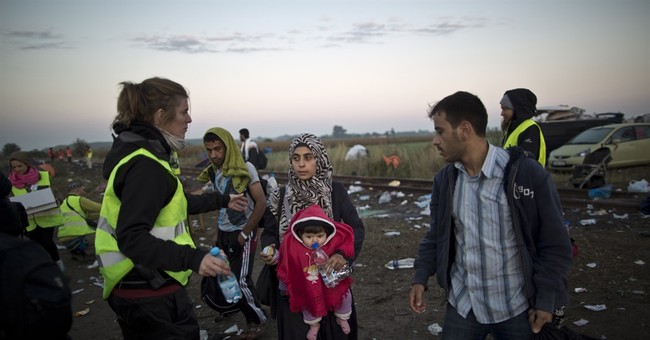 Trashed streets. Tent camps. Chaos at railway stations. A toddler’s body washed up on the seashore. These are the scenes replayed over and over by the news media, depicting the worst refugee crisis to hammer Europe in more than half a Century. Among other refugees, some four million Syrians -- nearly a quarter of its population – reportedly have fled the country as a four-year civil war rages; overwhelming surrounding countries, and sending hundreds of thousands streaming toward the heart of Europe. However, it is not so much personal security that is the goal of many, if not most of these immigrants, as it is jobs and the economic freebies offered by that continent’s pervasive social welfare system.

While several European Nanny States, including France and England, succumbed to the tugs at the heartstrings resulting from photos of plaintive children, and precipitously announced they would accept thousands of immigrants, Ground Zero quickly became Germany -- perceived by many as having a virtually unlimited need for workers.

However, even Germany, which initially welcomed thousands of refugees with open arms and group hugs, has now realized the folly of its unrealistic “open border” policy. Chancellor Angela Merkel has moved belatedly to stem the rising immigrant tide – the schönes chaos or “glorious mess” created by her government’s dithering.

Here in America, rather than simply leave Germany, France, Austria and England to deal with the can of worms they opened, President Barack Obama and many members of Congress are wringing their hands and fretting about how to deal with this latest immigration crisis.

Obama last week announced plans to allow 10,000 Syrian refugees to enter the U.S. Even more troubling than this initial immigrant tranche, is the fact that many in the Democrat Party – and even some Republicans in the Congress – are pressuring the President to admit many more Syrian immigrants; perhaps ten times that number.

The basis for this “open door” immigration policy? Bloviating by the Administration that, “the refugee crisis is not just a European problem, it’s a world problem,” which then somehow – magically – creates an “obligation” on the part of the United States to do something.

An influx of immigrants from an area dominated by ISIS is a very real danger to national security; and despite promises from the Administration that it will take all due diligence to screen these immigrants, its track record in handling such intelligence and security matters leaves much to be worried about. Already there are reports suggesting that economic migrants from other countries, seeking to take advantage of better economic conditions and social welfare in Europe, are using fake Syrian passports to avoid being sent back to their own countries.

There is a more fundamental question than simply what security risks are posed by these immigrants, or if they even qualify for “refugee” status at all. What we should be asking is why we have any obligation, responsibility, or reason to take in these immigrants from Syria and elsewhere in the first place; particularly when our own immigration problem at the border with Mexico continues to fester without resolution.

Perhaps Obama harbors guilty feelings about his Administration’s inept handling of the turmoil in Syria and the rise of ISIS; factors which have fueled much of the current instability in the region. Or, perhaps it is simply a bid by a lame duck to salvage a degree of foreign policy relevance in the waning months of his presidency. Whatever the reason, this latest “open door” immigration folly should be slammed shut by the Congress, not encouraged.

One need only flip the calendar back one year to see how ill-prepared we are to deal with immigration problems at our own borders, much less one facing Europe. It was just last year when the Obama Administration authorized planeloads of “undocumented” immigrant families from Mexico and Central America, to be placed into communities across the country, for no sound reason but simply as a humanitarian gesture. The cost of that “policy” – in both dollars and security risks – is still being calculated.

And now, Obama and other Bleeding Hearts in our nation’s Capital want to do the same thing with thousands of immigrants from Syria and other countries torn by sectarian violence and suffering from lack of economic opportunity.

What about the obligation to the American taxpayer, who, as always, will bear the cost for housing, feeding and maintaining these “refugees”? What about the obligation to protect the fundamental values on which our country was built and under which it has prospered, but which have been widely rejected in the regions from which these people come? And at the very least, what about the common-sense notion that we must focus on fixing one immigration crisis at our southern border, before meddling in another one for which there is neither a clear obligation to or benefit for the United States?