"Be Prepared”—Boy Scouts of America file for Chapter 11

Bill Wenger
|
Posted: Mar 03, 2020 12:01 AM
Share   Tweet
The opinions expressed by columnists are their own and do not necessarily represent the views of Townhall.com. 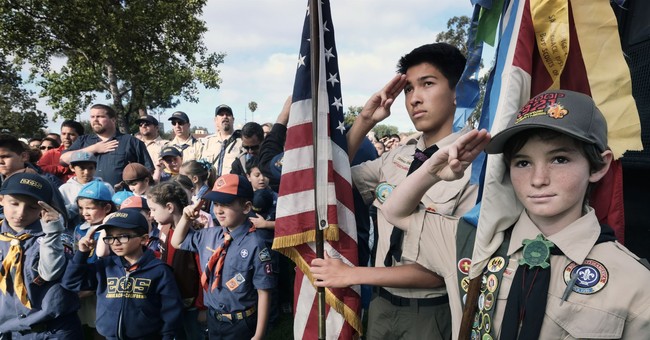 Editor's Note: This post was co-authored by Ron Korman.

The Boy Scouts of America, now Scouts BSA, filed for Chapter 11 on the 17th of February 2020. The reason for the filing is the number of pedophilia lawsuits against this 110-year old institution serving over 2.3 million youths. Unless you are as involved in Scouting, as we have been for most of our lives, most all will know likely know the misinformation the mainstream media will bombard you with.

Here are some of the facts of this issue. On February 18, 2020, BSA headquarters released the following statements:

We are heartbroken and outraged that there have been time when individuals took advantage of our programs to abuse innocent children and we sincerely apologize to anyone who was harmed during their time in Scouting.

Our plan is to use this Chapter 11 process to create a Trust that will provide equitable compensation to victims.

The safety of the children in our program is the BSA’s absolute top priority.

That’s precisely why we’ve developed some of the strongest, expert informed youth protection policies found in any youth-serving organization.

The vast majority of abuse claims are more than 30 years old. Scouting now is safer than ever before because of long-standing, constantly updated, and ever more stringent rules and programs in operation to protect Scouts.Those changes include mandatory background checks and youth protection training for all BSA leaders, staff and volunteers.

It is truly sad that some in the mainstream media, motivated by rampant sensationalism and ideology, have attacked, Scouting for advocating positive values to millions of our youth for over 100 years.

In a press conference on April 24, 2019, Michael Surbaugh, Chief Scout Executive of the BSA, Dr. Janet Warren, Professor of Psychiatry and Neurobehavioral sciences at the Univ. of Virginia, and other senior officials presented a balanced report on all that has and is being done by the BSA to address and stop any instances of such abuse. Surbaugh, while admitting, “…mistakes were made,” went on to elucidate the historical and on-going progress BSA has made regarding this issue:

1.Reporting immediately any such activity in the BSA to law enforcement.

2.Public reporting of any such abuses with full disclosure.

3.Creation of a file of individuals excluded from participation in the BSA with full public access to this information.These scrupulously maintained files are called “Ineligible Volunteer Files (IV Files).Such records have been maintained by the BSA since 1920.

4.An active training and awareness program for ALL adult volunteers and leaders of the BSA with strict protocols for care of the youth of all ages of Scouting, how to recognize any related issue of incorrect behavior by adults or youth, and how to properly report any such abuses. This training must be re-taken each year by all adults associated with Scouting.The program requirements and content are constantly under review, revision and strict implementation.

5.Any individual violating any law, regulation, or protocol of the BSA in their activities results s in prompt investigation, documentation and removal from Scouting. As Michael Surbaugh state, “We (BSA) have a very low threshold for removing someone from our Scouting programs.”

6.100% of all cases have been reported by BSA to law enforcement over the past 50 years.

In a larger sense, the number of adult individuals who have been documented and removed from participation from Scouting is very small compared to the over one-million adult volunteers serving Scouting.We have been Scouters in our Councils, Region, nationally and with the World Organization of the Scouting Movement for over 130 years.Never once, have either of us known of any proven instance of abuse in our Scouting experience.

Scouting has done enormous good for more than 110 million youth nationally Scouting teaches obedience to a creed of exemplary behavior, skills for live, selflessness, reliability, teamwork, patriotism and love of community, state, country and God.These values have helped millions develop themselves into stalwart citizens.Our nation has benefited by those Scouts who have become Presidents, Governors, Secretaries of State, Congressmen, mayors, notables in entertainment, business owners, military leaders and astronauts.

While serving his fourth combat tour, author Bill Wenger met astronauts Neil Armstrong, Frank Lovell and Gene Cernan and presented them with Afghan Youth Scouting patches while explaining how he had organized a group of volunteers called Scouters for Afghan Scouting. It grew from three to over 360 former international Scouts who helped rebuild the 70-year old Scouting in Afghanistan for both boys and girls. As soon as Armstrong and Lovell learned of this, the conversation abruptly shifted from their space and military exploits to a fervent discussion of all that Scouting taught and afforded them. Both astronauts were life-time Scouters (Armstrong and Lovell were and are Distinguished Eagle Scouts). Both said that much credit for the successes of their lives was directly attributable to the values and skills the learned in Scouting.

Scouting is a valuable institution for our country. BSA will weather this present story with your help and understanding.

Ron Korman served as a Naval Officer on the aircraft carrier USS Midway during the Vietnam War.  He was General Manager of Human Resources for Control Data Corporation.He is one of the very few Eagle Scouts who earned every merit badge. Bill Wenger is a retired commercial real estate executive and U.S. Army Infantry Colonel. He voluntarily served four combat tours in Iraq and Afghanistan after initial military retirement. He earned five Master’s Degrees and has taught National Strategic Planning, the Operational Level of Warfare, business and U.S. History. He is an Eagle Scout.

Here's the Person Who Got Left Off the Passenger Manifest on Pelosi's Taiwan Trip
Townhall
CBS reports breaking news about the Dems' 'Inflation Reduction Act' (Shocker: 'They waited to report this until after it passed')
Twitchy
Random Act of Journalism: Karine Jean-Pierre Gets Called 'Orwellian' During Interview
Redstate
Yes, They're Going to Arrest Donald Trump. Deal With It.
PJ Media