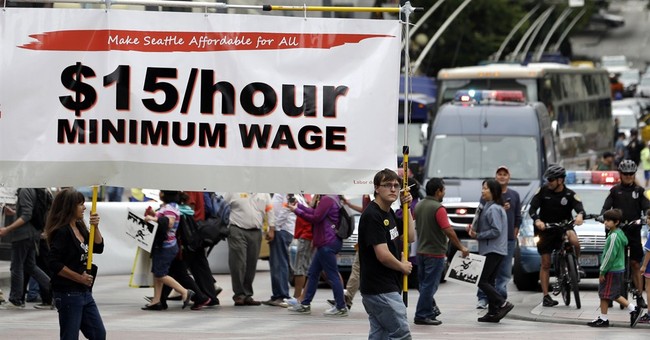 So it would appear that a business owner’s decision as to what they will pay their employees is about to be taken out of the business owner’s hands. Of course, the minimum wage has been with us for decades, but now the citizenry of Seattle, Washington will decide in the upcoming November elections if their minimum wage is to be raised from $9.19 an hour (currently the highest minimum wage for any state in the nation) to $15 an hour. The brilliant decision to put this idea on the ballot obviously comes from those who have never run a business.

Let’s assume this insightful initiative actually passes, because after all, who can support a family on a $9 minimum wage? (That’s the so-called main argument for the change.) Indeed, if the increased minimum wage is approved, one of two possible outcomes will occur.

First, let’s consider a restaurant that employs 100 people at $9.19 per hour, which equates to $919; as compared to employing 100 people at $15 per hour, which is $1,500. This results in $581 less per hour in profit. If it is a privately owned company, the owner just makes less money per hour, and multiplied by 40 hours per week, the owner makes a whole lot less. What’s the simple response? The answer would be to raise prices in order to maintain the profit. Yet, if the business’s suppliers are all operating under the same minimum wage increase, then the business owner’s costs will increase dramatically because of the multiplier effect, which means even higher prices for the consumer. At that point, more than likely, the same enthusiasts who supported the increased minimum wage will stop frequenting the restaurant. Why? It’s because the prices will have jumped too high.

Thus, business owners may resort to the second alternative, namely pick slips. Let’s take into account that 100 workers at $9.19 per hour is $919, and dismissing 39 workers would keep the payroll at approximately $919 with the newly established $15 minimum wage. Regrettably, if you’re in the food service industry, a reduction of nearly 40% of your staff would result in your service being a little slow, to say the least. Moreover, if this is a publicly traded company with the first and foremost concern being the bottom line and how it relates to the company’s stock price, more than likely both an increase in price and a decrease in employees (service) would be the result. The sad fact is that some of the people who supported the $15 minimum wage will not fully comprehend why their most recent dining experience was much more expensive, with service significantly slower than normal. Ultimately, these same people will decide not to go back to that restaurant, resulting in both the private and public businesses deciding to close their doors forever. The remaining 61 employees will quickly find themselves out of a job, but at least the legislators will feel good because they achieved their goal of an increased minimum wage.