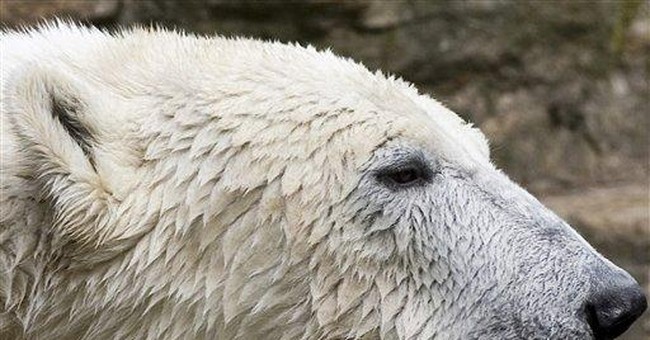 Environmentalists and the media have successfully bamboozled half the populace and every school child in America into believing large numbers of polar bears are starving and drowning in the Arctic because of global warming.

But it's obviously not even close to being true. How do we know this?

Because if even just one emaciated drowned polar bear's body had been fished from Arctic waters in the last five years, we'd have seen its sorry carcass a thousand times on TV and on the covers of Time and Vanity Fair.

By now the poor dead bear would have been given a trademarked first name, marketed as the official victim of Exxon Mobil-caused climate change and starred in three Pixar movies.

Alas, not a single drowned polar bear corpse has come along. Until one does, professional polar bear-saving groups like the Natural Resources Defense Council will have to scare up money and new members with traditional direct-mail campaigns like "Polar Bear SOS!"

With six pages of exclamation points, underlined sentences, boldfaced type fonts and apocalyptic predictions about imminent planetary and polar bear doom, it looked like a direct-mail parody when I first pulled it from my mailbox the first week of August.

It was the real thing, however.

NRDC celebrity senior attorney Robert F. Kennedy Jr. spent two pages warning that unless we act swiftly and join NRDC or send it money, "Governor Palin" and "some of America's biggest polluters could help push America's polar bears to the very brink of extinction" by 2050.

NRDC -- which has an $87 million annual budget, 1.2 million members and a staff of 400 busy lawyers, scientists and lobbyists - can get a little loony when it's shaking down its target audience of unquestioning "caring Americans."

For example, Kennedy's cry for help was backed up by four pages of polar bear pathos from Frances Beinecke, the group's distraught $300,000-plus-per-year president.

Evidently chosen as NRDC's emoticon-in-chief because she can channel the distress signals of polar bears all the way from the melting Arctic ice packs, she presumed -- incorrectly in my case - that it probably pained the reader as deeply as it pained her to imagine:

"... The last gasp of a polar bear before it drowns in the vast waters of the Arctic, unable to reach the increasingly distant ice floes it needs to find food."

"... The muffled cries of newborn polar bear cubs as they are buried alive when their snowy den collapses from unseasonable rains."

"... The exhaustion of a mother polar bear and her young as they succumb to starvation after enduring longer and longer periods without food."

Beinecke's Arctic soap opera blathered and blubbered on and on, ultimately leaving the impression that it was a proven fact many polar bears were starving, drowning and even eating each other in heretofore unseen numbers because global warming is melting more and more of the sea ice they live on and hunt from.

Beinecke didn't use her great imagination to interview any polar bears for NRDC's unintentionally hilarious package of tear-jerky propaganda.

But since it's apparently OK to make up anything you want about polar bears, let's imagine how a wise old bear might react to his proud species being defamed by NRDC as helpless victims and having their allegedly endangered lives exploited for money-raising purposes.

"Dear NRDC," the average Grandpa polar bear might write. "Thanks a lot for your love and concern. But please don't worry so much about us. In fact, please leave us alone.

"We and the Arctic sea ice are doing just fine. We've lived on the frozen top of the world for 250,000 years. We've survived two ice ages and a meteor that killed off the wooly mammoths.

"We've seen a lot of climate change and a lot of pack ice come and go over the eons. Believe us, it's natural. It's cyclical. It's unpredictable. But we'll adapt, as we always have.

"We are not endangered. We are not going to go extinct in 30 years -- or 10,000 years. There are at least 25,000 of us living quite well up here and, trust me, we're going to survive the coming ice age with a lot less trouble than you will."