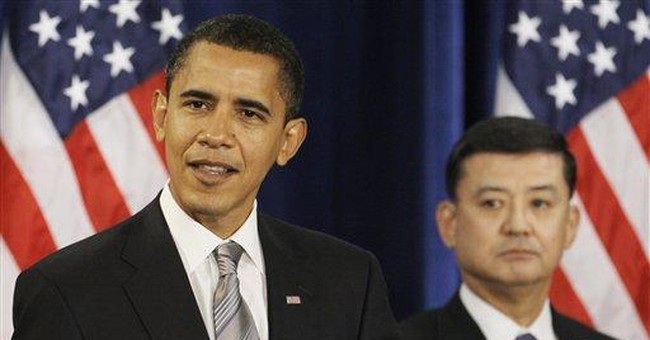 Bill Sammon has been the deputy managing editor of the Fox News bureau in Washington only since August, but he's no rookie inside the Beltway. A former White House correspondent for The Washington Times and The Washington Examiner and frequent Fox News on-air guest, he's written four New York Times best-sellers, including "At Any Cost: How Al Gore Tried to Steal the Election" and "Strategery: How George W. Bush is Defeating Terrorists, Outwitting Democrats, and Confounding the Mainstream Media." With President Obama and his team about to take over D.C., I called "Big Stretch" -- the nickname used by some for the 6-foot 7-inch Sammon, including President George W. Bush -- at his office on Thursday, Dec. 4:

Q: Is Washington looking or feeling any different during the preparations for the coming of Obama?

A: I think there's a tremendous sense of anticipation in Washington, regardless of one's political party, that not only are we getting a new president after eight years but we're getting, obviously, the first African-American president, and obviously a change-of-party president. You know, I have a daughter who lives in Washington. She lives on U Street, and on election night people spontaneously gathered and marched on Lafayette Park, cheering and chanting and partying. So, yeah, it definitely feels different, especially as we prepare for the inauguration festivities.

Q: What's your general assessment of the way Obama is handling his transition preparations and picking his team?

A: I think he's been fairly deft at it, as he was at his campaign -- pretty sure-footed; not a lot of gaffes, although there was that unfortunate throwing of Nancy Reagan under the bus for seances she never held. But other than that, he's been pretty sure-footed, and I think it's been a continuation of how well he ran his campaign. You can disagree with this guy or agree with him on policy and on politics, but on the mechanics of running his campaign and so far running his transition, I don't think you can find a whole lot of fault there.

Q: Any surprises on his economic team, which is seen pretty much as centrist and certainly not leftist?

A: Well, I think you could say that for both the economic team and the national security team. I think some liberals -- the real staunch liberals -- are a bit disappointed that the picks have been by and large centrist. Yet there is tremendous forbearance on the left for Obama. They're willing to give him pretty wide berth in these matters. On the other end of the spectrum, I think conservatives and moderates perhaps breathed a sigh of relief at some of these picks that he's rolled out because they weren't Michael Moore-type, wild-eyed liberals. They were grown-ups. They were adults who, even if you disagreed with them, certainly seem competent.

Q: Editor Katrina vanden Heuvel of The Nation magazine is trying to calm down her progressive readers and telling them not to worry -- that Obama's not going to betray us.

A: Yeah, there's an enormous amount of goodwill and the lefties are really giving Obama the benefit of the doubt and keeping their powder dry. I suspect if he actually governs from the center, that that honeymoon will end and they will go after him from the left. There are all sorts of theories out there. I've heard some liberals say, "Well, he's just doing this to give himself cover and then he's going to govern as a leftist. But he'll say, 'I kept (Robert) Gates on as the Defense secretary,' so people won't get too worried about him."

That's the thing: We're all in the realm of the theoretical now -- he's rolling out picks that he would like to see confirmed as his nominees. He's holding press conferences where he's asked about potential problems that he will have to address once he takes office. But until he sits down on Jan. 20 and starts wrestling with the gnarly, thorny, difficult problems of governing, he's going to be able to float above it all. Once he gets down to making decisions, and the only questions that cross his desk will be the really tough, tough decisions, and where you are going to alienate some people and make others happy, then we will see what kind of guy this is. Then some of the stardust will start to rub off and he'll be actually a mere mortal.

Q: Is there anyone he's liable to be sorry he picked?

A: He's been pretty safe on these picks, but I do think that the Eric Holder pick (for attorney general) has its problems. The Marc Rich pardon is a pretty big deal. It's not just some wonky, obscure, esoteric issue that people don't understand. It's a visceral issue, and Eric Holder had a pretty significant role in pardoning this billionaire fugitive financier. There was a piece the other day in one of the papers that really delved into Eric Holder's true role in this, and it wasn't just dumped into his lap on the last day of the Clinton administration. This was something he had been aware of for more than a year and he had had dealings with it. So I think that could be problematic. There are other dealings that I think Holder had that could get him dinged-up in the confirmation hearings, but I don't think it'll be enough to stop him from getting confirmation -- especially with the Democrats having picked up seats in the Senate.

Q: Was choosing Hillary Clinton for secretary of State a smart move, a risky move?

A: I think it's pretty smart. It's about the right distance that you want to place Hillary -- not too far away in the Senate, where she could be a competing center of power in the Democratic Party, and not too close to him, where she is his vice president or something. But you put her at secretary of State -- which is a key position but she's going to be globe-trotting most of the time and she's his employee and basically has to do his bidding. I think that's the right distance to put Hillary.

Q: Will Bill Clinton be a bonus or a booby prize?

A: (laughs) Those of us who have covered Bill Clinton, whether you love him or hate him, you always appreciate him as a guy who makes good copy. He did an interview the other day where he was asked about what his role would be. In typical Bill Clinton fashion, he was like, "Well, I'm certainly going to make my views known to Hillary and she'll use me as the sounding board . ." In other words, he's going to have his back-channel influence on the Obama administration. And then he adds, "Well, unless President Obama wants me to do something even more, I'd be happy to do that." He wants to get involved here, so I think there will be a wealth of fodder for us in the news business, just like Joe Biden as vice president is bound to produce perhaps the kind of gaffes we saw during the campaign.

Q: What are the chances that Republicans and genuine conservatives, if there are any left, will be able to prevent Obama from doing what he and Democrats want to do on health care and unions, etc.?

A: It is somewhat significant that the Democrats failed to reach the 60-vote, filibuster-proof margin of majority in the Senate, although with Olympia Snow and some of the other moderate-to-liberal Republicans, they probably won't have trouble getting 60 votes anyway on a number of issues.

My feeling is that if there was ever a time for Democrats to actually succeed in enacting significant parts of their agenda, this is it. I don't know that the Republicans, in the final analysis, are going to be able to stop that much of it. I don't think Obama is going to be completely unchecked in his power. This is a system of checks and balances and even when you have a Democratic House, Senate and White House, there are still limits to what you can do. I think Obama is already bumping up against those limits. I think he is already jettisoning some of his .

Q: Reality is forcing him to.

A: Exactly. Like the oil windfall profits tax. That's already gone out the window and I think you'll see other things as he gets into the reality of governing.

Q: Is it fair to say that all of the conservative fears of Obama being the next Lenin may never materialize or that they were based more on his rhetoric and not on the reality of what his policies would be?

A: It depends on what you are talking about. When you are talking about legislation or perhaps tax policy, there are going to be strong arguments against Obama coming from the loyal opposition and sometimes those will carry the day. I think where conservatives really worry is in the realm of judicial appointments. He's probably going to have some vacancies on the Supreme Court and he's probably going to have enough people in the Senate to get just not consensus candidates onto the bench but pretty liberal justices. Equally as important, there's going to be a slew of other judicial appointments that he'll make elsewhere on the federal bench. Those of course are lifetime appointments and those people will be making decisions that will impact American society long after Obama is out of office. I think that's where conservatives say no matter how well we can stop him on legislation, he's going to leave his mark on the judiciary -- big-time.

Q: Will you and any of your Fox News colleagues be getting good tickets to the inauguration?

Q: Do they give out tickets or what?

A: I suppose they do. I honestly don't know myself how all that works. But as far as access to the Obama administration and what-have-you, we're very optimistic. We have very fair and honest reporters here. We think this is actually a golden opportunity for not just Fox News but in particular for the Washington bureau of Fox News. I think that viewers of all ideological stripes will increasingly turn to us for some semblance of balanced coverage. I'm talking about just plain old-fashioned, two-sides-to-the-story journalism, which I think is becoming a rare commodity on some of these other channels. It's tough to just get basic balanced coverage. I think there will be a hunger for that, even among liberals who are going to want to see some fair scrutiny -- and I think Fox will provide that, just like we did during the campaign.

Did You Notice Kamala Harris At That Infrastructure Announcement?
Townhall
'The a** whooping of facts': Christopher Rufo fact-checks Joy Reid on Critical Race Theory in must-read thread
Twitchy
Biden Threatens to Nuke Americans but Manages to Blow Up a Big Democrat Narrative Instead
Redstate
Innocent New York City Man's Life's Ruined When Neighbors Report Him for Going to Jan 6 Trump Speech
PJ Media